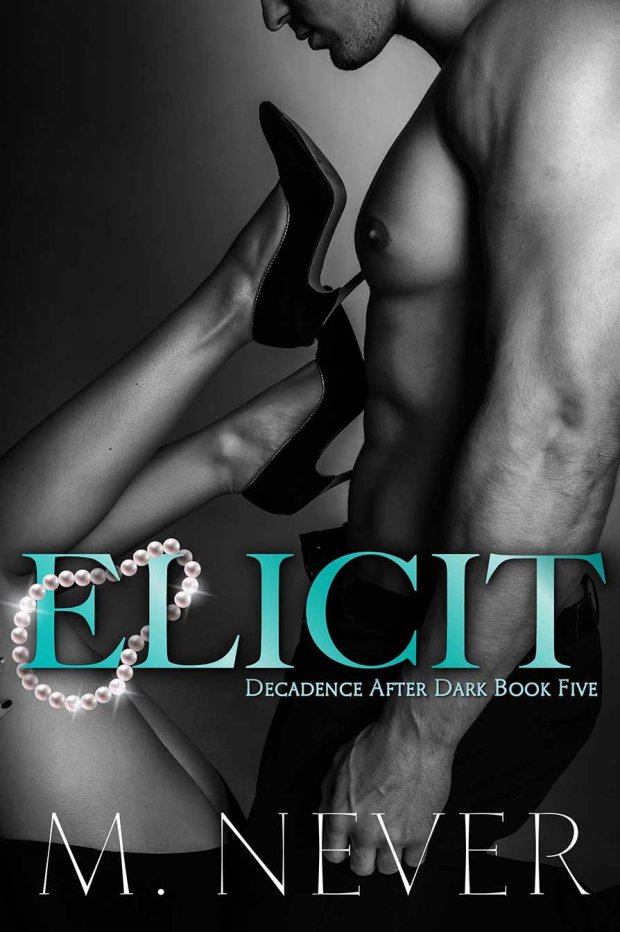 As I came to the end of Elicit, hating with all of my heart to see that last page pop up on my Kindle, there were two words that came to mind to describe Jett Fox. Two simple words to sum up this character’s power, charisma, drive and determination. Two words that even as I think of this book, Jett and London’s painful pasts and their triumphant future, I have to say the words with a smile and a sigh….

This love story with so many twists and turns, heartbreaks, and a soul shaking connection did not fail to disappoint. It was the story that I had been waiting for, and it was well worth the wait. Some may say that it is a bit of a rehash of Owned. There is some mention of the events of the first book of Decadence After Dark, but this is all Jett and London.

London came to Mansion and to Jett broken, lost and hollow. Believing with all her heart that she was nothing and no one… an empty shell to be used for sex, pleasure and pain. But not her own. London’s story is so heartbreaking, so painful… breathing in her story destroyed my heart. All of this is true. Still her story is so hopeful because of Jett. From the moment he opened the door to Mansion and there stood London, Jett knew that his life would be hers. He knew that he would do anything and everything to heal her heart, know her mind and capture her soul. This beautiful robin would be his.

Even knowing he would have to share her body with others, including with his best friend. Even knowing that they both had secrets, some of them deadly, Jett was determined to have London. He had grown up with women. He knew how to hamdle them, how to touch them, how to mold them in his own image. He would use everything he had to have her. I sat back, amazed and captivated. This man so enraptured me with his dominance, his tenderness and his love for one who had never known it. But when London caught on fire and began to feel her own power, I cheered loudly and proudly for her.

This story is so very twisty and full of dark moments. Things popped up that I never saw coming. The chemistry between Jett and London… I swear my kindle was on fire. The romance between them is sigh worthy. An amazing secondary cast that make this book so much deeper and richer. The bonds between Jett and his girls made me envious. The loyalty Jett displays to Kayne goes far beyond the bonds of friendship. These two were brothers in every sense of the word.

Elicit is a collection of beautifully written words that evoked raw open feelings. It’s an angsty, gut clenching emotional roller coaster, and I personally am sorry that the ride has ended.

“You don’t know what he’s capable of.”

“You don’t know what I’m capable of.”

Jett Fox has been surrounded by women his entire life. He knows what makes them tick, how to make them feel beautiful, and how to work their feminine wiles to his advantage. Honing sexuality is in his blood.

Jett is accustomed to women eating out of the palm of his hand, but when a tall, mysterious, redheaded goddess strolls into Mansion – his domain – the eccentric Dom finds himself enamored. She becomes an obsession in his dark, secretive, and dangerous underworld – a world that appears one way on the outside but is entirely different within.

Forced to maintain the ruse at all costs, he’ll walk a treacherous line between allegiance and lust, deliberately deceiving the one woman who means anything to him.

But the mysterious redhead has secrets of her own – secrets inlaid so deep they could threaten to tear both their hearts, and worlds, and livelihoods apart.

You’ve been claimed by Kayne…seduced by Juice… now it’s time to live Elicitly with Jett.