“The devil is not as black as he is painted.”

Jay Crownover painted her latest story at the Point, Honor, in black and red with maybe a hint of white to represent the darkness that often eclipsed the light. I thought I was prepared for the battle this book would bestow on me, but nothing could have primed me for Honor, Jay Crownover’s blackest book ever. No pep talk or words of wisdom would have helped me walk through the pits of hell where the devil reigned, praying for a sliver of light. All I could do was dive in and silently pray for mercy on my emotions, hoping they would stay at bay.

I wanted to rush through this riveting read, soaking up all of the ‘Crownover Crack.’ My emotions engulfed like flames, making me read in smaller doses. Some of these doses delivered darts of darkness that made me pull away to try to catch my rapidly beating heart. Honor swiftly sunk my soul, where it drowned in the dark in hopes to see light. Honor was my enchantment. My escape. My EVERYTHING.

The Introduction warned me, willing those feels to stand down. The Prologue prepared me for this battle, a book I knew would wreck me…and oh did it tear me apart. This battle was dark and deadly, one forged from the depths of hell, but one where I had to survive. This dark devil’s tale became my demise and I wanted to fight by his side. I knew Nassir’s story would be the hardest to digest and the longest from which to heal, but a story perhaps more worthy than those of the others who paraded the Point.

Nassir Gates, the beautiful man who is the power of the Point, had already waged a war in his past life that made the Point look like a playground. This brave boy went to war alone with no one by his side, not even his family.

“There was an army of one, and the war he fought was for survival and self-preservation.”

I wanted to hug the boy who was robbed of his childhood. I could not help but break and bleed for the man forced to become the monster…all that he’s even known. Until one woman lends him a lifeline, a sliver of light in the depths of darkness. A life with lost meaning, Honor is Nassir’s reason to live.

“She was so much more than freedom. She was Honor.”

Nassir’s salvation and soul rest in Honor, a virtue and savior. Beautiful and vibrant Keelyn ‘Key’ Foster danced her way through Nassir’s club and into his heart, giving him a reason to care…a reason to live…for the first time ever. She left him once the devil revealed a glimpse of an angel, fleeing from her past. It’s time for the devil to pay his dues and take what’s taunted him and holds a piece of him: Honor.

Oh what a temptation Nassir Gates was from outside in. Golden skin and bronze eyes, dark hair, and a body made of perfection with a dominance that made me melt. This monster if made into superhero would be the Punisher, half villain and half hero, as Nassir walks a fine line between good and evil. Key did not stand a chance against this dashing devil.

“I was made to stand out not to blend in, and I was going back to the Point ready to shine.”

Of course, Nassir doesn’t stand a chance against Key either as she is the only one to unlock his frozen heart. Beauty, brains, and bravery in spades, Key is Nassir’s equal in every way. She is her own warrior. Both are a match made in heaven forged in hell.

“You are so deep inside of me I feel like I’m missing pieces of myself when you aren’t around.” 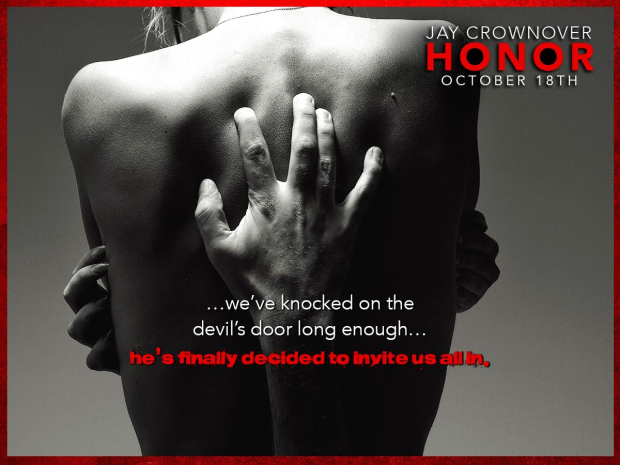 The devil melted me, even making me swoon. The heart I tried to freeze to stay strong in this story shattered so many times.

“He kissed like he did everything else, with finesse, with skill, with demand and force.”

His beautiful battle warrior wills him to fight as she doesn’t want to want Nassir, but can’t help the power and passion that permeate between them. This devil plays dirty to collect his dues, needing the Key to his heart.

“I’m not giving you my heart.”

“You don’t have to give it to me, because I’m going to take it one way or another.”

One dark angel…one mixed devil…one team…one war. Tragedy strikes, blood is shed, and war wages on the Point where lives are altered forever. The past may be the most dangerous weapon of all.

“When you make your home in hell, you want to have the devil in your corner.” 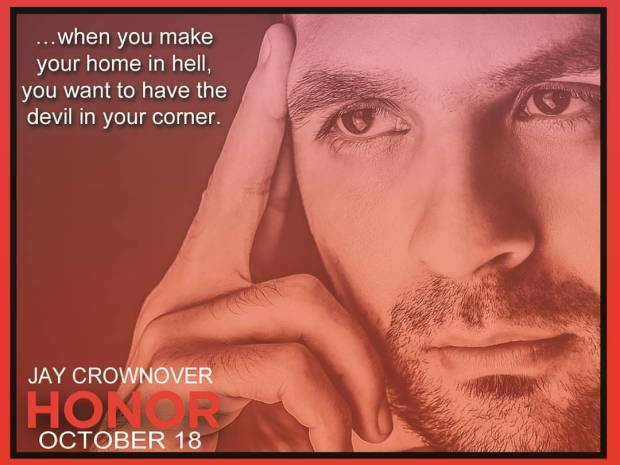 Oh did this devil dancing on the city of doom demolish every part of me. Honor dipped me into the darkness, dangling my emotions off a cliff, where I could not help but fall. I FELL HARD for Honor, a story that shook my soul with a force I did not see coming, but one that engulfed every emotion like a raging inferno. Honor BLEW ME AWAY!!!

Honor hit my heart hard, wrecking it—wrecking me—in the best way. Haunting, heartbreaking, and heroic, Honor is a must-read romance that rages among the ashes in an epic story of the hardest-fought love ever. HONOR WAS EVERYTHING!!!

Only Jay Crownover can make you fall in love with the devil and follow him to the pits of hell. Oh did I want this dashing devil in my corner, Nassir, my dark knight. I fell so deeply in love with a villain who—hidden beneath the mask—was a hero with a heart. Jay Crownover’s writing reaches inside deeply, grabs your heart, holding it in its hands, and then both hits and hugs it so hard. With each story Jay Crownover writes, I fall deeper into her spell that I’ve dubbed ‘Crownover Crack’ since meeting this author’s first masterpiece, Rule, years ago.

Those devastatingly beautiful books that authors pen like paint to a canvas, so vivid and valuable…THOSE ARE THE ONES THAT STEAL MY SOUL AND OWN ME FOR LIFE. Jay Crownover is one of those wondrous writers of brilliant books that break you, bind you, and brandish themselves to you forever. It’s that ‘Crownover Crack’ that hits me harder each time, where I’m rendered with the worst yet best emotional hangovers. My ride through heaven and hell was a huge honor, one I’d do again in a heartbeat.

Don’t make excuses for me.

I am not a good man.

The first time I saw her dancing on that seedy stage in that second rate club, I felt my heart pulse for the first time. Keelyn Foster was too young, too vibrant for this place, and I knew in an instant that I would make her mine. But first I had to climb my way to the top. I had to have something more to offer her.

I’m here now, money is no object and I have no equal. Except for her. She’s disappeared. But don’t worry, I will find her and claim her. She will be mine.

Like I said, don’t be fooled. I am not the devil in disguise… I’m the one front and center.

I was in the Point for less than a day when I got word that the man that ran the streets wanted to see me. I like to lay low. I liked to blend in, but here it didn’t see like that was an option. Instead of desert sand, the battleground here was asphalt and concrete, and as soon as my presence was known, it was as if this place recognized the fight lying dormant inside of me. This city called to it. I don’t know why I instantly felt like I fit, but I did. So I went to see the man in charge, fully expecting to offer him the last of my cash in order to gain a foothold in the desolate kingdom. I was a survivor. I could do without money for a little bit. No man was more resourceful than I was.

I walked into a disgustingly gaudy strip club, offended by its crass ugliness. I was expecting to meet the ruler of the land, state my intentions, and let him know I would bow to no man here or anywhere else ever again. I was expecting a shakedown and maybe some strong-arming since I was obviously foreign and undocumented. I was technically legal since my mother had been an American citizen before she fell in love with an extremist, but I hadn’t really existed on paper since she handed me over to killers and radicals when I was just a kid. Mossad didn’t want me to be anything other than their trained attack dog, so they hadn’t offered up any proof of identity for me during my time at the end of their string. What I wasn’t expecting was that my cause, my reason, my purpose for living, and my something to believe in would be dancing nearly naked on a horrifically ugly stage, looking like she was going to cry at any second. She was so much more than freedom.

She was beautiful, young, innocent, and so obviously resigned to her fate. It pulled at a heart I was stunned to find I still had buried somewhere deep underneath the brutal history that filled up the inside of me. It was the first time I felt it beat, and the pulse of its yearning scared and electrified me in equal measure.

I started to move toward her like all those invisible gods I spent my life killing for were leading me directly to her when suddenly a man twice her age and triple her size leaped from his seat next to the stage and hurled himself up onto the platform directly at the girl. In the blink of an eye he was on top of her, rough hands all over her naked flesh. I heard her scream. I saw her long limbs flail and thrash under him. A red haze filled my vision and I forgot all about staying quiet and laying low. I forgot all about being a ghost, and realized that I could channel the fight that had been forged into my very soul, the fight that was slumbering restlessly inside me at that moment, into protecting something so innocent. She woke the fight up and she kept it alive.