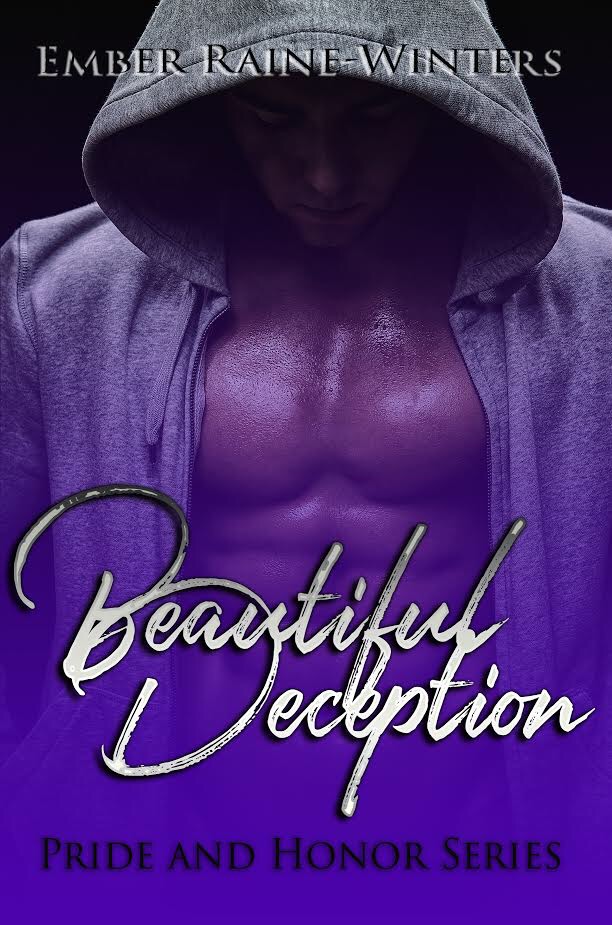 Seriously where do I even start with this book… This book sucks you in, into a story that will leave you with your jaw hitting the ground on several occasions and you shouting at your kindle in disbelief.
The story flows at a pace that grips and captivates and infiltrates you to the point that reality just doesn’t exist and the sheer pain of having to put it down to adult…. that pain is real.
Mac and Marty’s story is filled with Emotion, drama, suspense and angst, as secrets are revealed, life altering decisions are made, mistakes forgiven and Love winning the day, this book is action packed and will leave you with an ending that will frustrate the Hell out of you but in such a Good way.
I can’t wait to get my hands on the next book in the series a 5+++ Stars.

This is the third book in the Pride and Honor Series, but it can be read as a standalone

He knows. He knows what I did and there is no way he will ever forgive me. That’s the least of my worries. Now, that secret, that little boy that holds my heart in his hands has been stolen from us. I’ll do whatever it takes to get him back. Even if it costs me my life.

Marcy had always been mine. I thought she always would be. A misunderstanding ruined that. Ruined any chance for us to be happy. She stole that chance… that life. I don’t know if I’ll ever be able to forgive her. The truth is I never stopped loving her, and I’ll do whatever it takes to save her.

The plane ride had been over five hours so far, and it felt like the longest of my life. I didn’t know what was going on with Marcy and Kenzie, and worse, I had no idea where my son was, and that was killing me the most.

Twitch was doing his nervous twitchy thing and it had me on edge. “What’s the matter, brother?” I asked warily.

“I got a bad feeling about this.”

“Shit. Really?” I got up from my seat. I knew better than anyone what Twitch’s feelings resulted in. He had an uncanny sixth sense when things were about to go bad and fast. I couldn’t sit still any longer.

“Mac, it’s going to be okay, we will get him back,” Tasha said vehemently.

I nodded but continued pacing. There was nothing else I could do until we landed and saw what the situation was. Tasha was upset too. Marcy was her friend and Tasha’s dad, Barnes, was responsible for this mess. We all knew he was behind it, but we didn’t have one fucking detail yet.

The worst part of this whole shit show? That I was still pissed at Marcy, and I was feeling completely guilty about that. How could I be so angry with someone and still love her at the same time? It had been twelve years since she left me, and yet I still thought of little else. I should have fought harder. I should have stayed in Baltimore and made her talk to me.

The flight attendant came out and told us to put our seat belts on in preparation of our descent, so I sat down next to Tasha. I never stopped moving though. My knee was bouncing up and down burning off my nervous energy.

“You still love her don’t you?” Tasha placed her hand on my knee.

“No, Tasha. It really doesn’t. She made her choice. She knew what her decision would do to me and she did it anyway. She knew how important having a family was to me and she stole that from me. So, no, the fact that I still love her makes no difference because she obviously never loved me.”

Tasha glared at me for all of five seconds before her tirade began. “That’s bullshit Mac and you know it. I could tell when you all rescued us from Doug’s basement that she was still in love with you. I could tell the day that Twitch proposed to me and she screamed in my face about Twitch ruining everything that she felt guilty for what she had done. I had no idea what it was at the time, but I could see it. You both need to get over your hang ups, stop being stupid, and just be together because everyone can see that’s what you both want.”

“Okay, babe,” Twitch said softly, seated on the other side of her. “That’s enough.”

She looked angry and I had no idea why. I had heard Marcy had freaked on Tasha that morning but I wasn’t sure why.

Even if I hadn’t found out the way I did, I would have found out eventually, especially now with all the craziness. I thought about that in silence the whole drive to Brock’s compound.

“Shit, is that smoke?” Griffin asked when we were about a mile away. Everyone started yelling at once.

“Tasha, it’s okay. I’m sure they are fine. Brock has cameras everywhere. They saw it coming.” Twitch attempted reassurance while rubbing her shoulders. “They had to have seen it coming.”

He added the last part mostly to himself, but he looked at me with a grimace. I knew he was as worried as Tasha, but I was jumping out of my skin. Marcy had to be okay. She just had to be. There was no other option. I was not losing them both.

The gate was a twisted pile of burning metal and I thought the worst. The thick column of smoke got thicker and hung heavier in the air the closer we got to the house. Griffin was driving as fast as he could, but there was very little visibility. If we weren’t careful the smoke would cause an accident and we might never make it to Pix.

The bright orange flames engulfed the house. My heart nearly beat out of my chest when I saw it.

“Shit, what do we do?” Trey asked, panicked.

“Get on the phone with emergency services and leave an anonymous call about the fire. We will search the surrounding area for any sign of them,” Griffin commanded.

“If they were in the safe room, there is a possibility they are still in the house. How do we get in there to check?” I asked completely irrationally.

“Fuck that. I’m going in there and you’re not stopping me, Griffin.”

I jumped from the SUV and went around to the back. Grabbing my bag, I rifled through it and found a small hand towel and a bottle of water. After pouring some on the towel, I dumped the rest on my head.

“Bro, you can’t go in there,” Twitch said from behind me.

“Yes, I can, and I am.” I shoved past him towards the house.

“Mac, you can’t.” Tasha attempted to get in front of me.

“Don’t. He popped his shoulder out of place trying to get to you when you were locked in that basement.” I pointed wildly at my cousin. “He was a mad man when it came to looking for you. I will move you out of my way if I have to, Tasha.”

Thankfully, she stepped aside after that. The closer I got to the house the hotter it got. It looked like whoever had set fire to the house had busted the door down first. I got down low and held the towel over my nose and mouth and went inside. It was like a horror show in there. The heat was so bad I felt like my blood was boiling and my skin was searing off.

“Marcy,” I yelled through the towel over my mouth. “Marcy.”

Please God, let her be okay.

That was when I heard a slight tapping. A support beam had fallen and held the door to the saferoom closed from the outside. The tapping was faint, and I prayed that the room was air locked. If not she would have smoke inhalation by the time I was able to get to her.

The beam was on fire and blocking the door. Removing my jacket, I wrapped it around my hands and grabbed the only part of the beam that wasn’t burning and pulled. I used all my strength, but it refused to budge and I knew that I couldn’t continue my heavy breathing, or I would be dead in minutes.

A hand came out then, and grabbed another part of the beam. Trey and I lifted it together and moved it away from the door.

I pushed the door open and that was when I saw her. All five-foot-two beautiful Pixie laying on the floor. Her face was ashen, and I could tell she was barely hanging on. Picking her up, I cradled her to my chest and silently prayed.

Trey and I tried to move quickly, but the house was falling down around us. Every few steps, we had to dodge a board or a beam. The floor beneath was losing its integrity as well.

“Hurry Trey, or we’re gonna be buried alive,” I shouted just as the floor gave way beneath my foot.

“Mac,” Trey bellowed, not realizing what had happened. “Come on, man. We gotta go.”

“Take her and get out of here. As soon as I get my leg out I will be right behind you.”

Trey started to argue, but the look I gave him was lethal. He grabbed Marcy and headed stealthily to the door.

When they cleared the front door, I covered my mouth with the edge of my shirt to get a breath of air and then attempted to get my foot out of the floor. Every time I pulled, a searing pain shot through it. I gritted my teeth and tried again, but I was already coughing from the lack of oxygen in the room. I laid my head down to give myself a moment and try to catch a breath, but it was useless. Just before everything went black, I felt a pair of hands pulling me back towards the flames.

Ember-Raine Winters lives in sunny California with her two beautiful kids and a wolf. Also known as Apache her pure white Siberian Husky. She loves writing romance and reading just about anything she can get

her hands on. And, football! She loves watching football and going to games. It’s one of her favorite ways to unwind. She dislikes the super-hot temperatures in her city and exercise. She hates to exercise but somehow her sister still gets her to do it every day. She also thinks it’s completely awkward talking about herself in third person.
Ember loves connecting with readers so don’t be afraid to stalk her and drop her a line on social media.