“I like you a little bit more each time you prove to me just how flawed you are.”

Long-time readers like me have been begging for more Marked Men, and Jay Crownover has granted us with second generation of her first book family. What a gift! How special to know that one of your favorite authors of one of your favorite series has brought beloved characters back to life with a new generation that’s just as poignant and powerful as that of their parents. 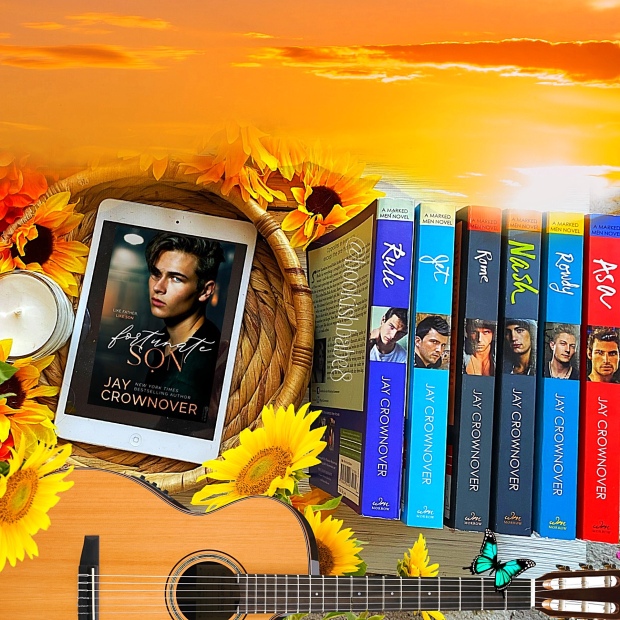 Told through a stunning musician and her sports star muse, Fortunate Son is a tangled and hard-fought hero and heroine romance anchored by strength, second chances, and serendipity. Its prose is powerful and passionate, a journey of love, lyrics, and life. I slipped into these characters’ souls, became their voices, and felt every feel they had to give. There was so much intrigue and angst, complexity, and moving parts, and I loved watching Ry and Bowe battle every bit, growing stronger as one in this spectacular and stunning story. You can feel the heat and heart radiating from Ry and Bowe … the chemistry and deep connection just penetrate through the pages.

Wholly original and heartfelt, written with spirit and soul, Fortunate Son is an irresistible tale of love, friendship, family, and self acceptance. It was so easy to fall in love with every word, every character, and everything. Through her spellbinding and heartfelt writing, Crownover shows the beauty among the broken, the flaws that make the human, and the courage to chase your dreams or make new ones.

Fortunate Son brought that same heady, hit my heart, lost-in-this book feeling from when I met my first Jay Crownover book, Rule!! It’s the perfect fit to the Marked Men series: uniquely-told, wholly felt tales that stand on their own pedestals. With its powerful and passionate prose, I could only surrender to the spell and song of Fortunate Son. Another epically inked story that marked my heart and soul. That Crownover crack strikes again!

“Whenever any one of us from back in the day feels like we’re about to fall, there are a whole lot of hands ready to catch us.”

Ry Archer and Bowe Keller are as different as night and day. But that doesn’t stop the childhood frenemies from reconnecting whenever one of them needs some help tackling any of life’s major puzzles, like figuring out why getting what you always thought you wanted isn’t living up to all the hype. They might constantly rub each other the wrong way (except for the times when they rub each other the really-really right way), but there is no denying they’ve always made one hell of a great team. They manage to balance each other out… when they aren’t driving each other crazy.

For Ry, he thought he had the perfect girl, the one who was going to run headfirst into a methodically planned future. He was going to marry young and have the same kind of legendary, life-long romance his parents did… or so he believed. His girl was going to stand by his side as he chased his dream of being a professional football player all the way to the NFL.

Bowe always felt like she had to run before she learned to walk to keep up with her father’s musical legacy. He’s her hero, and she wants nothing more than to make him proud. Bowe’s about to figure out that maybe she wasn’t meant to be in a rock and roll band and that it is possible she let her father’s success cloud her idea of what making music should be. Bowe needs to find her own path to fame, and there’s a good chance she wouldn’t be brave enough or bold enough to start over if Ry Archer hadn’t charmed his way back into her life when she least expected it.

Some days they’re enemies. Other days they’re lovers. For a while, they were strangers. But now, it feels more like they might have always been soulmates.

Eventually, Ry and Bowe realize that letting go of an old dream and creating a new one is much easier to do with the right person by your side.

Jay Crownover is the international and multiple New York Times and USA Today bestselling author of the Marked Men Series, The Saints of Denver Series, The Point Series, Breaking Point Series, and the Getaway Series. Her books can be found translated in many different languages all around the world. She is a tattooed, crazy haired Colorado native who lives at the base of the Rockies with her awesome dogs. This is where she can frequently be found enjoying a cold beer and Taco Tuesdays. Jay is a self-declared music snob and outspoken book lover who is always looking for her next adventure, between the pages and on the road.