Most Likely To Score by Lauren Blakely

I read the most ROMANTIC of sports romances!!! I can’t stop SWOONING over this story that is just so SWEET-SIGHING GOOD!!! MOST LIKELY TO SCORE… just WOW!!! This book blinded me a bit as I didn’t expect to love it so hard. Best. Blindside. Ever!!! 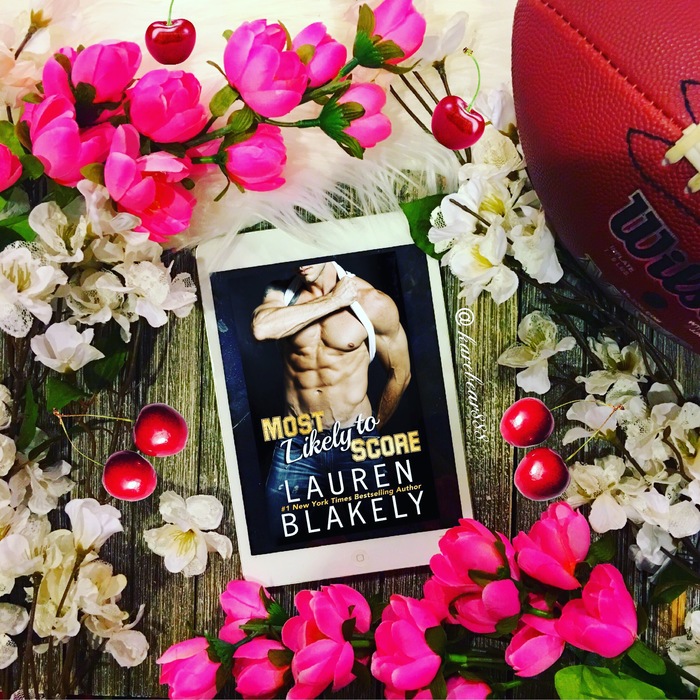 Not even ten percent in and I wanted this hero for myself. Hot. Humorous. Blue eyes. Tall. Big in the right places. Playful. Passionate. Sexy as sin. Football player. I’m a sucker for a hot jock with a huge heart. Jones is HERO PERFECTION!!! Can you say hall pass?!?

”You didn’t look at me and all I want to do is look at you.”

The heroine is incredibly noteworthy too! Jillian is as brainy as she is beautiful. A bold woman who goes after what and who she wants, I admired her so much! She is sweet, sexy, and sassy too and I would so become her bestie.

I’m a shooting star. I’m lit up. My body is full of electrons and neurons, pulsing and glowing bright.

This build-up in this book between the heartfelt hero and heroine made me BREATHLESS at times. Jones and Jillian were MAGICAL together!!! I just LOVED the friends/worker to lovers theme executed to perfect in Most Likely to Score.

”What would you do if I was yours?”

Witty writing. Enticing innuendos. Sexual tension. Swoon. Humor. Heat. Hot hero. Heart … all the heart. Most Likely to Score is ALL THAT and MORE. Just YES!!!

This is fire and heat, and I need more of the blaze.

I’m so IN LOVE with this romance! This sports story SEDUCED me with smolder and sweetness along with a STRONG HEROINE and THE ULTIMATE HERO who is as tender as he is tough. Most Likely to Score made me MELT so much! This story SLAYS ROMANCE!

I don’t want to lose her. And I don’t even have her.

Maybe there are rules worth bending.

It seemed like a good idea at the time…

As the team’s publicist, I need a football player to be the face of our charity calendar, and Jones Beckett needs a savvy PR woman to manage his new sponsorship deal.
A simple give and take, and I’m sure I’ll have no problem following my iron-clad rule — don’t date a player. And never ever fall for one. No matter how charming, big-hearted and devilishly clever the man is.

But you know what they say about best laid plans…

Once I start spending my off-season days and nights with Jones, I’m following a brand new playbook, one that has me falling hard for the incorrigible flirt — heart, body and mind.

That’s against the rules, and now what seemed like a bright idea has turned into a dangerously forbidden one.

It was supposed to be an I-scratch-her-back-she-scratched-mine kind of arrangement. And man, did Jillian ever drag her nails down my back on one hell of a hot night. Okay fine, it was several hot nights on the road.

Now we’re back in town and it’s time to set the play clock back to when we were simply player and publicist. Given the way the last few years have gone, I can’t risk this deal. Trouble is, I want more than than just another night with her.

What’s a guy to do when he’s always been most likely to score, but the woman he’s falling for is way off limits?

“Love it,” Christine says emphatically, her lips and that metal hoop in the bottom one the only parts of her face visible since the lens covers the rest. “How about a little tough-guy look now?”

Because tough guys hold footballs in front of their junk.

“This is my best badass pose,” I say, narrowing my eyes and staring at the camera like I’d stare at the secondary of the Miami Mavericks.

“Oh yes, more of that, right, Jillian?” Christine shouts to the other person here in the studio with us.

That person is Jillian, and she hasn’t looked my way since I strolled in here and dropped my drawers. Damn shame.

From her spot leaning against the far wall, the team publicist answers in a crisp, professional tone I know well. “Exactly. We love his tough-guy face.”

She doesn’t even look up from her phone.

I keep working it for Christine, doing my best to make sure my blue eyes will melt whoever is looking at the picture when the magazine hits newsstands and Internet browsers in another few weeks.

It’s an evergreen kind of issue, since the body edition is one of the most popular. Gee, I wonder why. I’ve no doubt this shot of me with a football for my skivvies will quickly surpass the previous most-searched-for image of yours truly—the game-winning catch I made in the end zone in the Super Bowl two years ago.

But, to be fair, there’s another shot of me that’s searched for maybe a tiny bit more. I like to pretend that shot doesn’t exist.

“The camera loves you,” Christine croons as the snap, snap, snap of the lens keeps the rhythm.

“The feeling is entirely mutual,” I say, pursing my lips in an over-the-top kiss.

Christine laughs. “You are my favorite ham in all of sports, Jones. That’ll be a perfect outtake for our website.”

“That’s a brilliant idea,” Jillian chimes in. “Make sure to send me a copy for social, please.”

I sneak a peek at the dark-haired woman by the wall, that silky curtain of sleekness framing her face as she smiles a bright, buoyant, outgoing grin at the photographer then drops her head back down.

Jillian Moore is one tough nut to crack.

I’m nearly naked in front of her, and she hasn’t once looked my way.

I’m going to need a whole new playbook to get this woman’s attention.

A #1 New York Times Bestselling author, Lauren Blakely is known for her contemporary romance style that’s hot, sweet and sexy. She lives in California with her family and has plotted entire novels while walking her dogs. With fourteen New York Times bestsellers, her titles have appeared on the New York Times, USA Today, and Wall Street Journal Bestseller Lists more than eighty times, and she’s sold more than 2 million books. In October, she’ll release HARD WOOD, the final standalone romantic comedy in the Big Rock series. To receive an email when Lauren releases a new book, sign up for her newsletter! laurenblakely.com/newsletter