“Every once in a while, in the middle of our ordinary lives, love gives us a fairy tale.”

I’ve loved fairy tales since I was a little girl—from Cinderella to Beauty in the Beast to modern romances that feel like fairy tales. Fairy tales are just…SIGH…magical and mesmerizing. These magical stories transport me to a wonderful fantasy world that sometimes feels very raw and real. Royal Scandal by Marquita Valentine is a feel-good, friends-to-lovers fairy tale of a romance dipped in suspense that will make your heart dance! 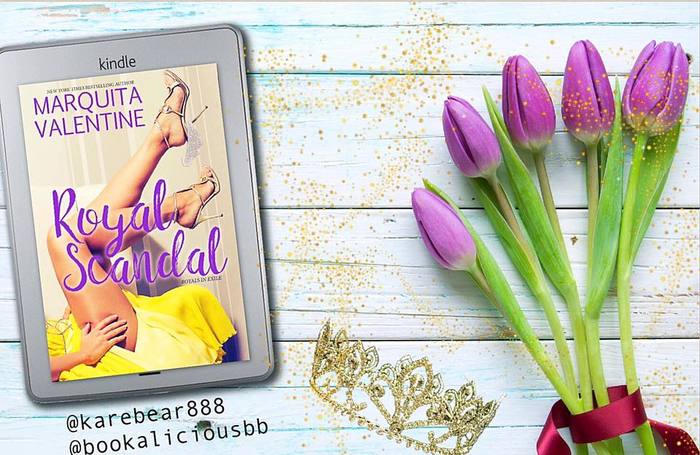 Royal Scandal enraptured and ensnared me from the start, this slow burn of a book with more sweetness than steam became my obsession. This fairy tale twisted itself around all of me. It did not let go; I did not let go. Royal Scandal with its sweet and spicy story along with a fusion of Southern sass and charming Brit demeanor was the magical mixture for a moving romance.

Crown Prince Colin Sinclair is tall, green-eyed, dark-haired, and handsome with a caring personality, delicious body and dirty-talking mouth. He puts his family first even over his love life. Until he stumbled upon the beautiful, red-haired and blue-eyed, Della Hughes, the caretaker and housekeeper of his new American estate of which he and his family fled from his British country under exile.

At just seventeen when he fled his country to America, Colin felt a connection to the fifteen year-old Della, a spark when she challenged him immediately.

“I feel as if I’ve found a kindred soul in her.”

Colin and Della became fast friends, though fighting the chemistry that loomed between them for ten long years. Ten years until Colin’s exile may be lifted if he claims a bride. To Colin, that would be heaven to finally get his hands on forbidden territory, jump out of that friend zone into more.

“Della. My best friend. The woman of my dreams. Forever off-limits…until now.”

Colin has to convince Della to become his bride, to possibly toss friendship aside for more. Maybe Della wants Colin as much as he does her.

“My head is inundated with her image, of all the ways I want to have her. The hundreds of ways I want to kiss every inch of her body. Make her mine in every way possible.”

Oh was Colin Mr. Prince Charm-the-Panties off of me. Della is one lucky lady! I want to suddenly be the Cinderella to this perfect prince.

Della will do anything for her best friend, Colin, including marrying him but in name only. Though their platonic plans become a challenge when the combustible chemistry surrounds them like the air they breathe.

“I don’t think I need to show you how hard I am for you…unless you don’t believe me and need to investigate for yourself.”

“Too bad because I would look forward to your inspection.”

Colin is royally endowed and his package may be as irresistible as his passion and charm for Della.

“He wants me and I want him, and there’s nothing to stop either of us.”

Della falls into the rabbit hole, completely smitten by the oh-so-persuasive Prince. The passion between that has built for ten years is about to burst, friendship caught on fire ready to blaze into an inferno. Feelings of more than friendship are forming, but Della is holding back, afraid that her happily-ever-after is not in the cards.

“Colin, don’t you get it? Stuff like this doesn’t happen in the real world. Happily ever afters for a maid and a prince—seriously? That’s Disney magic.”

Colin is hiding a secret or more that could be scandalous. Couple that with Della who doesn’t believe in happily-ever-afters or fairy tales and this prince may have a tough time convincing his bride-in-name to become his forever princess.

“Are you saying you want this to be real?”

“It’s already real. I want this to be forever.”

Royal Scandal is a Cinderella tale where Prince Charming is as sweet as pie and his princess is all sass. This friends-to-lovers love story sank itself into me, sprinkling fairy dust over the pages, where I was covered in a delicious concoction of sweetness and smolder. This magical fairy tale melted me from head to toe.

I had love in my heart and stars in my eyes while devouring Royal Scandal. A dash of romance, a splash of suspense, and a heap of heart make this modern-day Cinderella story a must-read! So royally good!

Fairy tales do come true—and so do tabloid scandals! Bestselling author Marquita Valentine kicks off a juicy contemporary romance series with a novel about a prince whose best-laid plans go deliciously awry when he marries the maid next door.

Forced to flee to the United States with his siblings after their parents’ assassination, Crown Prince Colin Sinclair takes it upon himself to become the caretaker of his family while hiding out near Charlotte, North Carolina. But after a decade in hiding, the secret’s out and Parliament demands that Colin wed a princess of their choosing. Unwilling to play their game, Colin decides to marry an American instead, and he has the perfect candidate in mind.

As a home-service professional, Della Hughes doesn’t believe in storybook endings. But when her best friend and secret crush reveals that he’s a flesh-and-blood prince, she doesn’t know what to think. Still, she’ll do anything for Colin, including becoming his wife—in name only, of course. But when their plans to stay purely platonic go by the wayside, their fake honeymoon turns all too real. After a week of white-hot nights, Della can

Marquita Valentine is the New York Times and USA Today Bestselling Author of the Holland Springs and Boys of the South series.

Since first taking the plunge in July of 2012 to self publish, Marquita Valentine has appeared on the Top 100 Bestselling Ebooks Lists on iBooks, Amazon Kindle, and Barnes&Noble. She’s been called “one of the best new voices in romance” (Guilty Pleasures Book Reviews) and her books have been accused of being “a sexy, fun, and slightly addicting contemporary read” (The Book Queen).

When she’s not writing sexy heroes who adore their sassy heroines, she enjoys shopping, reading, and spending time with her family and friends. Married to her high school sweetheart, Marquita lives in a seriously small town in the south with her husband, two kids, and a dog.