Hooking Up by Helena Hunting

When I first met Amie and Lex in Shacking Up and again in Eye Candy (Hello, Gladiator Lex), I knew their story was one I NEEDED like air to breathe. The initial flirting, playful banter, and sexual tension was an instant HIGH. After a small hit, I had to have MORE. I also had to know if justice would be served to the A-man with the small pencil down below. Spoiler alert: The sweet justice dished out to the anti-hero A, was the icing on the cake. 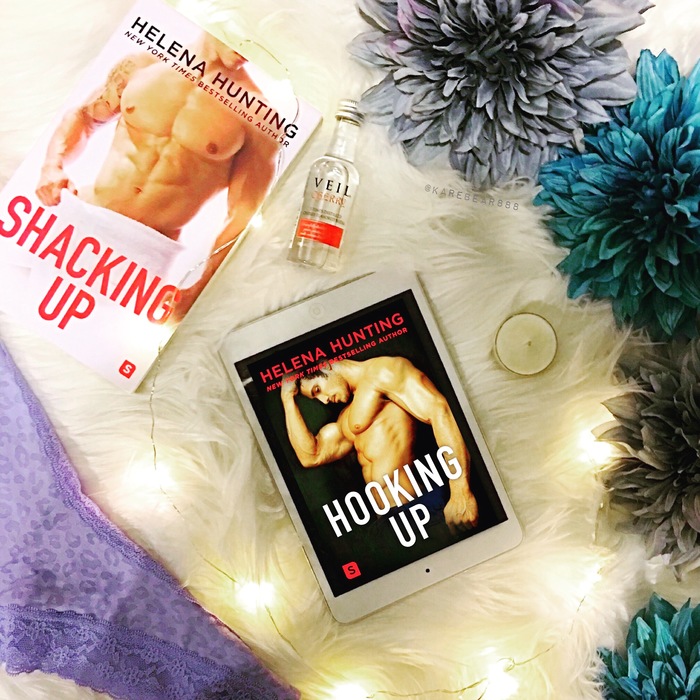 Like little brother, Bane, Lexington ‘Lex’ is ALL ALPHA. A god. He so smokin’ hot and with a big heart!!! This melt-worthy man OWNS ME for life. Just YES!!! Lex is HERO PERFECTION, a lethal mix of hotness and heart that will have you wishing for a hook up with him.

Amie is back and not the controlled and refined woman she was before. She is a full-on firecracker ready to take back her life! I ADORED her!!! Amie is a sassy and smart beauty, a heroine you’d want as your bestie.

Still nursing wounds from a wreck of a relationship, Amie is out to rediscover herself, recover the old Amie who valued herself most and lived, laughed, and had fun.

I missed my chance before but maybe now I can be part of what helps put her back together.

Collision after collision has Lex and Amie together again. It’s as if a force is pulling them, a strong tide. A force of fate.

”I can only behave myself for so long.”

Maybe I don’t want you to behave.”

This hero and heroine EXPLODE TOGETHER!!! Their chemistry is COMBUSTIBLE. Their passion is PALPABLE. Their union is UNSTOPPABLE!!! I felt their chemistry steam off the pages, a blaze of fire that burnt me everywhere!!!

I crush my mouth to Amelie’s…It’s not a very coordinated kiss. It’s messy and teeth-clashing. It’s want and need. It’s possession. Hers and mine.

Together, Lex and Amie were so MAGICAL!!!This hero and heroine are fused by FATE, making their story even more special. These two were created for each other. I loved them both so much!

”Tell me you don’t feel this pull.”

Hooking Up is heart-stopping sexy meets saucy and sweet—a romance you’ll want to hook up with NOW!! This story is a sensual SLOW BURN that blazed though me everywhere! I was ENRAPTURED!!! Hooking Up HIJACKED ME from the start, quickly becoming a HIGH, one I felt the whole time reading. I LOVED this romance fused by fate, bathed in blazing heat, and felt with love. I felt the POWERFUL PULL of Hooking Up so hard, a story I couldn’t put down. Hooking Up is ALL THAT and MORE!!!

Amalie Whitfield is the picture of a blushing bride during her wedding reception–but for all the wrong reasons. Instead of proclaiming his undying love, her husband can be heard, by Amalie and their guests, getting off with someone else. She has every reason to freak out, and in a moment of insanity, she throws herself at the first hot-blooded male she sees. But he’s not interested in becoming her revenge screw.

Mortified and desperate to escape the post-wedding drama, Amalie decides to go on her honeymoon alone, only to find the man who rejected her also heading to the same tiny island for work. But this time he isn’t holding back. She should know better than to sleep with someone she knows, but she can’t seem to resist him.

They might agree that what happens on the island should stay on the island, but neither one can deny that their attraction is more than just physical.

Filled with hilariously scandalous situations and enough sexual chemistry to power an airplane from New York City to the South Pacific, Hooking Up is the next standalone, laugh-out-loud romantic comedy from Helena Hunting, the New York Times bestselling author of the Pucked series and Shacking Up.

This is a MUST-MEET ROMANCE!!!

One thought on “Review – Hooking Up by Helena Hunting”