“The one you love will be your greatest sacrifice.”

That line alone is what grabbed me about A Sacred Vow and would not let go until I was done. From the first page to the last sentence, Julian and Lia’s story moved me my heart and stirred my soul. For someone who certainly has not read many paranormal romances, I was so enthralled and so thoroughly engrossed in this story of two enemies finding a love that surpasses a vow made long ago.

Julian Devereux made a vow to his sire – he would rid the world of the vampire hunters, the Cormacs, that tried to destroy his coven. He took great pride in his promise and thought that he had fulfilled his vow. That was until he met the beautiful Aurelia and found the telltale birthmark that indicated that she belonged to the family that tried to finish his. Still he is drawn to her… her strength, her beauty and her zest for life. She makes him feel something he hasn’t felt in over 200 years. She gives him hope that he can finally have what was lost to him so long ago – true and everlasting love.

Lia Gallagher knows nothing about vows, vampires or feuds that began long before she was alive. What she does know is what she feels when she’s with Julian. This wonderful man with his sexy British accent, brooding personality and mesmerizing ways. She wants Julian for Julian, something that hasn’t happened for him in a very long time. Still, Lia knows that Julian will have to choose between love and loyalty… between a long held promise in his past and a love that will determine their future.

This story of forbidden love is beautifully written, an absolute joy to read from beginning to end. Angsty and heartbreaking. Willa took a chance to write a story from her heart and the words show that Julian and Lia are characters that she has long wanted the book world to meet. Even the secondary cast of Nolan, Evie, Bex and Ann make such an impression and make this story so much more. Even Gideon. I so loved this story, and I cannot wait to see what happens next.

I swore a solemn oath that saw to the end of the Cormacs, a family of hunters that persistently sought to rid my coven’s existence.

For years we have lived in the shadows, free from hunters and the weapons of wood that could destroy us.

But the familiar scent of Cormac blood is awakening my senses. We were certain that we had ended the bloodline. Now, the vow I swore plagues my mind. The guilt I harbour buries deep. The desire and lust burns.

My pledge to my family is now a promise to protect the woman I love.
Aurelia Galligan is a descendant of the Cormac bloodline. I should drain her. I have to destroy her. But she may just end me.

**This is a forbidden romance between the hunter and the hunted. It features smoldering vampires and no cliffhangers. The content is not suitable for readers under the age of 18.** 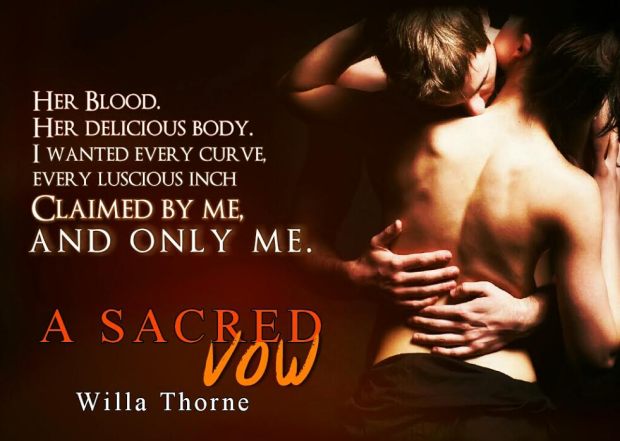