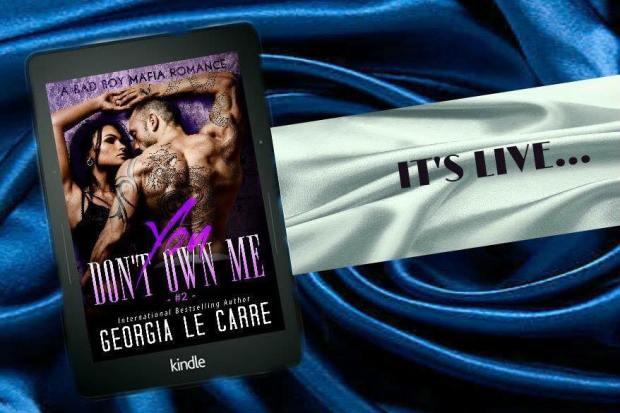 Wow! What a powerfully intoxicating, grip your heart, sexy read! This is the second and final installment to The Russian Dom series by Georgia le Carre and she did not disappoint! She blew me away with this conclusion of Zane and Dahlia’s story.

This story continues right where it left off. Dahlia has just found out some unsettling news about Zane, but after talking it out with Olga, she calms down a bit. She starts to see his side of things….where he was coming from.

In this story you get to see these characters relationship bloom and grow into something strong and beautiful.

You get to look in to Zane’s past. See what it was like, where he came from, and why he is the way he is today. His story is utterly heartbreaking and had me a snotty mess.

Dahlia stands by Zane and tries to show him that she loves him and she’ll be there for him. He begins slowly opening up more and more to Dahlia….but not much. He begins showing her he cares about her through his actions and little things he says.

“Do you know when your lips touch mine you make me feel like I am flying?”
His lips touch min. “Then, fly Dahlia. Fly as high as you can.”

She tries to show him that he can be more. Leave the mob world behind and do something greater. That he’s better than he believes he is. She’s a sneaky little bugger too, I’ll give her that! Ha!

Throughout this story you get to see a whole other side of Zane that we didn’t get to see in the first book. I didn’t think I could, but I did…..I fell more in love with Aleksandar Malenkov! *SWOONS* This.….this was absolutely the perfect conclusion to Zane and Dahlia’s story. I’m sad that it’s over. Le Carre took me on an emotional rollercoaster….my endorphins were out of whack! All over the place! …..and I won’t soon forget my Zane and Dahlia. I can’t wait for more from this author!

The conclusion to Zane and Dahlia’s story.

The sexy Russian, Zane, has taken my heart, but kept his intact.
I never knew a man like him existed, let alone that I would become part of his life. A man who can make a girl’s heart pound like a freaking drum by his presence alone. He’s the reason for the madness my life has become.
The more we are together the more my heart and soul cries out for him.
Olga says I am the one for him if I can learn to fly.
Now I wake up each day with only one thought.
Fly Dahlia, Fly …

Dahlia Fury was the perfect toy. Beautiful, sassy, sexy.
I thought I could immerse myself in her flesh. I didn’t expect the taste of her sweet nectar to become a drug in my veins.
Now I’m fighting hard to keep control.
She has no idea that there’s nothing more I want than to be with her. She carries a lamp into my darkness and makes me feel alive in ways I’ve never felt.
I can leave the life of crime and be anything I want to be, she tells me. Maybe she’s right. Maybe all I need is a reason.
Maybe the reason is her …

Georgia le Carre delivers a non-stop sizzling companionship between the sweet, loving Dahlia Fury and the cold, dominant Aleksander Malenkov (aka Zane). The length of this book isn’t very long, but man does it pack a punch! I.WAS.IN.IT. I couldn’t put it down!.

Dahila is a beautiful and smart girl living away from home in the UK. She lives with her best friend, Stella and works at a literary agency, reading through author submissions. She cares about her family and her friends. She’d do anything for them.

Zane is a ruthless, cold, brutal but sexy as hell mob boss. He doesn’t do relationships because he doesn’t want any weakness that can be exploited in his line of work. He beds women until he tires of them and then finds a new play thing.

Zane and Dahlia first meet when Stella has a double booking for a masseuse appointment. Stella begs her to go in her place to see Zane so she doesn’t lose his business. Dahlia reluctantly agrees. Zane knows right off that she’s not a masseuse and assumes (because she’s wearing Stella’s uniform and it’s tight and revealing) that she’s a prostitute. Things get hot and steamy quick!

…..but Dahlia doesn’t want him. She wants to stay as far away from him from now on. Sure he’s hotter than hades, but…….Stella also has a crush on him and she’s her best friend.

Zane wants her. He’ll do anything for her.

“Hey, if you ever need help or anything, anything at all, call me.”

“The world is a dangerous place, rybka. You don’t know when you need a helping hand. It is better to have a friend than an enemy.”

When Dahlia gets a phone call from her panicked mother about her sister possibly being missing, it sends her into a flurry of emotions. She calls everywhere she can think to locate her sister or see if anyone’s seen her. When she turns up empty handed, with no closer to finding out what’s going on, she turns to the one man she never thought she’d ask for help.

Stella pushes her to go to Zane. Knowing he’s a mob boss and has more connections that the police. He will be able to get Dahlia answers faster…..breaking rules if he has to.

Zane agrees to help her, but nothing in this life comes free.

“I will help, but nothing is for free, rybka. If I give you something you want, then you must give me something I want.”
“What do you want from me?” I ask, my voice a whisper.
“You.”

This is where the story gets me fanning myself! Dahlia agrees to basically be his sexual submissive if he finds her sister. Which, he does, cause there would be a hot and steamy story otherwise!

While the sex in You Don’t Own me is without a doubt, insanely panty-dropping hot, I enjoyed these characters together immensely. I enjoyed watching sweet Dahlia chip away at the cold and calculating Zane’s rough exterior. You could see him falling for her throughout the story. You could see it in the way he wanted to protect her, even if it was from himself. He would say hurtful things to try to keep her at arms length. There is something holding him back and I can’t wait to find out what it is!

“I saw something in his eyes once. Just once, but it was enough for me to know ghosts blew through the deserted corridors of his soul like gusts of cold wind.”

This was my first read by Georgia le Carre and I was not disappointed! This book is a nail biting, edge of your seat experience. The cliffhanger left me breathless with all sorts of questions! I can’t wait for book two so I can see what le Carre has in store for these two!

I knew I should have listened to my inner voice. I should never have said yes to helping out my friend, but I did, and the Russian with the dangerous eyes shocked me by how easily he stirred outrageous desires in my body and made me lose complete control. I did the only thing I could. I walked (all right, I ran) away to the sound of his cheap parting shot, ‘you’ll be back when you need my help.’

But I haven’t been able to run away from him in my dreams. God knows I’ve tried. Then something unthinkable happens. My sister goes missing while on a backpacking trip, and the ruthless predator is the only one who can help.

He sits in his study, a beautiful, powerful man with eyes cold enough to freeze my blood.
He says he can help, but nothing is for free …

But I’m not a man given to doing favors. I’m an opportunist. There’s always a price for my help.