As Dust Dances by Samantha Young

Music is the outburst of the soul.

There is nothing more moving than a tale threaded with music. Music that complements and completes the story. Music that makes the story. Music is the key to the heart and soul, and Samantha Young unlocks and unleashes a musical concert of feels in As Dust Dances. From beginning to end, Samantha Young paints a stunning story in vivid detail that hits the heart and sings to the soul. So broken. So brave. So breathtaking. So beautiful. 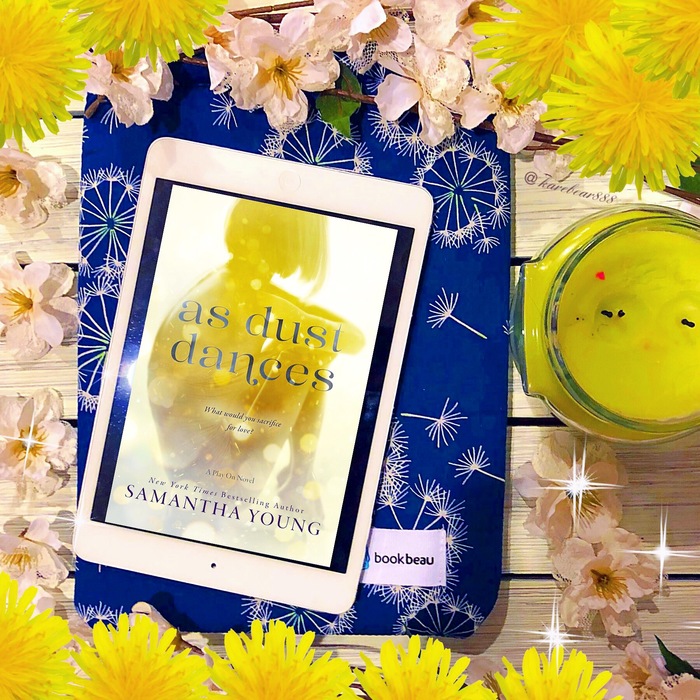 I was CONSUMED with this romance that’s so raw, so real, and so riveting. Samantha Young brings the reader in—not just with the compelling characters—but with pointed questions, adding another layer of realism to this tale. This heartfelt tale held me captive. An addiction I couldn’t put down. A story I couldn’t let go . . . wouldn’t let go. I ignored real life as I was sucked into a heartbreakingly beautiful world of broken characters, moving music, and a love story of strength and survival with all the feels.

I can’t find all the pieces that used to be me.

Set in Scotland, As Dust Dances is the slow-burning love story of a former pop-rock star who fled America to escape—merely exists as shattered pieces of herself—and the music producer who helps make her whole. Killian and Skylar are perfectly imperfect but perfection together. I felt their story as if it were my own.

With broken and beautiful characters with off-the-charts chemistry, a moving and musically-threaded storyline, fire-hot and fiery angst, and words so full of feels, As Dust Dances is a journey of the heart and soul. A slow burn of heat and heart. A story of two broken characters stuck in a dark, black and white world, who finally see color. A story of strength and survival. A story of heartbreak, hope, and healing. A story of rising after falling. A story that’s EVERYTHING.

”You’re mine, Skylar Finch. I think somehow I’ve always felt like you were mine.”

This story spoke to me like a song where I felt every word—so broken yet so beautiful—as it sang to my soul. My heart was hit so hard that it both shattered and soared. As Dust Dances is an EXPLOSION of FEELS that I felt everywhere. I felt every word. I FELT EVERYTHING! This broken and beautiful musically-threaded tale MOVED ME SO MUCH!

”I know I don’t yet, but I’ll do everything in my power to try to deserve you.”

As Dust Dances is so powerful and poignant. PURE MAGIC. This heart-stopping romance brings all the feels. I felt every word!!! I cried tears of sorrow, tears of hope, and tears of joy in a tale that touched every part of my heart. My heart was so full that it exploded! I LOVED this story so much! As Dust Dances is still dancing in my heart and singing to my soul.

Once upon a time Skylar Finch was the lead singer of a hugely successful American pop-rock band. But fame made her miserable. When years of living a lie suddenly ended in tragedy, Skylar fell off the map.

Eighteen months later she’s sleeping in a tent in a cemetery in Glasgow, making just enough money to eat by busking on the streets. She manages to avoid recognition, but not the attention of one of Glasgow’s ambitious A&R executives.

Killian O’Dea works at Skyscraper Records, Scotland’s most successful record label. Raised by his uncle and owner of the label, Killian’s upbringing would have been devoid of affection entirely if it wasn’t for his loving sister. Killian is unflinchingly determined to bring the label more success than ever, and the young homeless woman who busks on Buchanan Street is going to help him do that. Her music speaks to him in a way he refuses to over-analyze. All he knows is that if it can touch his dark soul, it’ll set everyone else’s alight.

Skylar makes it clear that she doesn’t want to sign with him. But when she experiences the dangerous reality of a woman sleeping rough, Skylar has no one else but Killian to turn to. An undeniable connection forms between them. But Skylar doesn’t want the career Killian is trying to forge for her, and when her past comes back to haunt her Killian will be faced with a decision that could ruin him. He must either free Skylar from his selfish machinations and destroy everything he’s ever worked for, or lose a woman who has come to mean more to him than he ever thought possible…