AHHHH! I can’t stop smiling. I can’t stop sighing. I can’t stop swooning. I can’t stop feeling and loving Filthy Lies! Ever since I met Naked over four years ago, the first book in The Blackstone Affair series by Raine Miller, I’ve been bewitched! I’ve loved this series from the very first page—from Ethan and Brynne to James and Winter—and will never get enough! Heart meets heat in Filthy Lies, a deliciously dirty, decadent and heart-stopping sensation that will render you breathless, addicted, and aching for more. 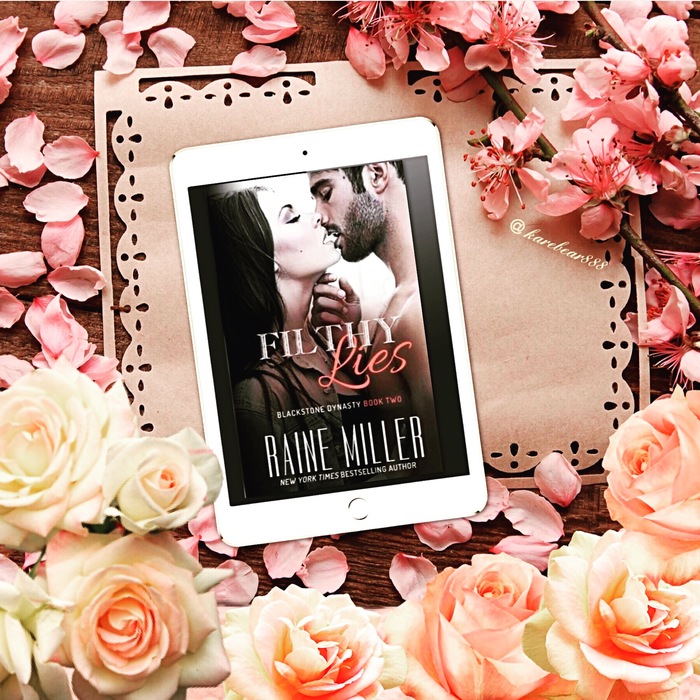 Winter Blackstone was my kryptonite.

I was so CONSUMED with this romance! I nearly 5 starred Filthy Lies from its enticing and intoxicating Prologue alone that had me screaming for more! This story sparks with sexual tension. The build-up is fire that blazes through the body. So off-the-charts hot. So delicious and divine. A slow burn of scorching desire and soul. I scorched and I swooned. Filthy Lies lit my body, heart, and soul on fire! I BURNED while devouring this book! So heady. So hot. So heartfelt. So everything. I MELTED FOR MORE.

I was so lost in him. I always had been.

This story is SEXY with strong characters that captivate from beginning to end. Raine Miller has written one of the hottest and heart-pounding heroes along with one of the kindest, biggest-hearted heroines ever.I wanted to be Winter Blackstone, a woman I had to admire and one I wished I could be. James is as caring as he is dominant and delicious. I adored Winter and James’ melt-my-heart romance so much—the steam, the struggle, the swoon, and the forever love of soulmates that shines bright—that I didn’t want it to end. I was WHOLEHEARTEDLY ENAMORED with this heartfelt hero and heroine with history who ENGRAVED MY HEART.

The off-the-charts chemistry, the pent-up passion, the promise of more, the love that was buried but brought to life, the sexy and swoon, and heart and soul make Filthy Lies the PERFECT ROMANCE. I LOVED being wrapped up in Raine Miller’s words again. Raine Miller’s writing is always superior—stories like Filthy Lies I’ll always blindly one-click because this author is a master storyteller that slays romance! Just YES!!! Spellbinding, sinfully sexy, and soul-stirring, Filthy Lies is a can’t-put-down story that swept me away where I’m basking in the most blissful of book comas. ROMANCE BLISS!!!

”Tell me right now what you want, Winter.”

Hands down, Filthy Lies is a TOP 2018 and MUST-READ ROMANCE!

On the day I turned fifteen years old I knew I loved James Blakney. There was a look in his eye that told me he’d finally noticed I existed in a realm beyond best-friend’s-much-younger-off-limits-don’t-even-think-about-it-little-sister. Call it womanly intuition, despite the fact I was barely qualified for being an actual woman at just fifteen—and only in the biological sense—but still, I knew I loved him.

What I never expected from him was a proposal of marriage nearly eight years later. I know it’s not supposed to be a real marriage, but James is certainly making it feel that way.

He’s also hiding something from me.

But I’ve hidden the truth from him as well.

So many filthy lies.