Light is easy to love. Show me your darkness.~ R. Queen

I love books bathed in darkness with a sliver of light, as they dig deeply into the depths of hell but somehow find a bit of heaven. Jay Crownover is a mix master of black, shadowy stories that still shine like gold. This master storyteller makes you love the ‘baddest’ of bad boys in her powerful series called The Point and The Breaking Point where the men who sway from criminals to heroes, the boyfriends that mothers would hide from if you brought them home, the boys you should probably run from too. But you can’t help but adore these saints and sinners that snag your heart. 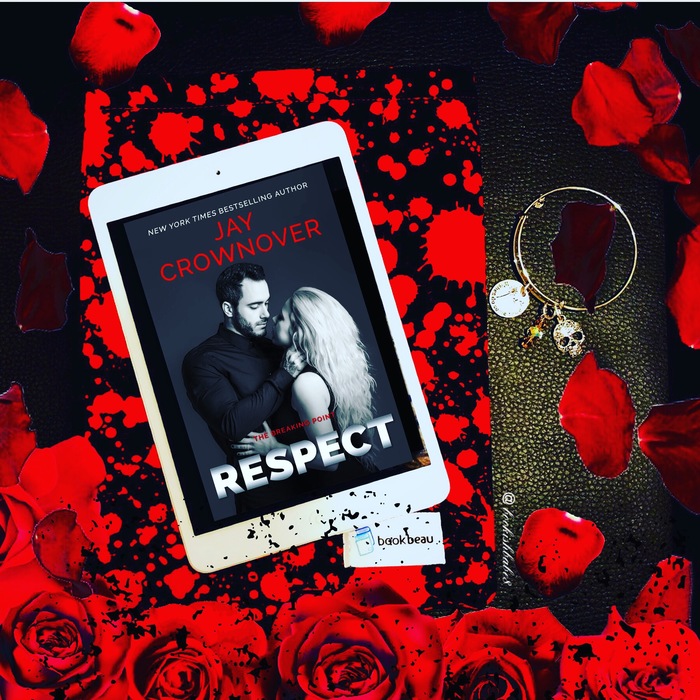 Respect is the story of a broken-hearted but brave princess who has to flee the corrupt kingdom because she thinks the big, broken and bold prince doesn’t see her beyond a young friend. Oh how wrong this heroine is; the powerful prince sees her but does not want to corrupt her. Neither realize the power of fate. Fate has other plans and is the real ruler of this kingdom.

Time was supposed to heal all wounds, but mine felt like it was still wide open and bleeding all over the place.

Scorching, spine-tingling, and oh-so strong, Respect is the perfect fusion of light and dark, heaven and hell, and sin and salvation. Gritty with bits of glam. Dark with bits of light. Dangerous and daring. Respect is a HEADY HIGH! I was ADDICTED to Karsen and Bookers’ journey that is as emotional as it is explosive. I LOVED being back at the Point! I can’t help but become fully vested in these characters—the baddest and bravest boys with the biggest hearts and the bold heroines who stand beside them. From Bax to Booker and Dovie to Karsen, I’ve fallen for every one of the heroes and anti-heroes of the Point.

”Don’t regret this later, Karsen. If you do, it might kill me.”

Fire-hot, formidable, and full of feels, Respect is a fresh spin on romance. Jay Crownover always brings a uniqueness to her words that I’ve called ‘Crownover Crack’ since meeting Rule years ago. From Better When He’s Bad to Respect, The Point and The Breaking Point series are perfectly imperfect stories that slay with strength and soul. Respect is the perfect farewell. A HIGH-OCTANE, HEART-POUNDING ROMANCE that delivers all the way.

”The only person whose touch I ever needed was yours.”

What a powerful finish to a powerful and poignant series! I so don’t want this series to be over. Jay Crownover rocked all of these brilliant bad boy books out of the park! The addicting anti-heroes—villains fused with victors—of the Point will mark your soul, grab your heart, and stay with you forever. Bad has never been so good!!!

It was a place that was so bad, so dark, so lost in crime and violence it didn’t have a name…we simply called it the Point. It was the ending point, the breaking point, the point of no return…it was simply a place where only the strong survived and anyone else was bound to die trying.

Once upon a time, there was a beautiful princess who called a corrupt kingdom home sweet home.

Protected and sheltered from the worst the world had to offer, she fell in love with the crumbling city that burned and blazed around her. Every dirty corner, every scary shadow, found a place within her heart. So did a man who was violent and dangerous, just like the streets she claimed as her own.

He was all business and brutality, except when it came to her. With her, he was calm, caring, and heartbreakingly patient.

He warned her over and over that he wasn’t the man for her, but she refused to listen. She never expected either the streets or their enforcer to hurt her, since she’d given her heart so completely to both.

She should have known the streets in the Point were always going to be savage, and so was the man committed to keeping control of them in the hands of criminals and bloody kingpins.

Blindsided by a betrayal which cut so deeply she was sure the wounds would never heal, the princess fled the home she loved and the man who broke her heart. Throwing away her rusted, twisted crown was supposed to help her forget. All it did was make her long for everything she left behind.  She told herself she would never go back, but in this tormented kingdom, family is everything. Eventually, she has no choice but to return.

While she was gone, the people who loved her worked hard to make the city safe, and the man who destroyed her sank deeper into the darkness. Going back shouldn’t feel like surrender… but it does. As this pretty princess hovers on the edge of the unknown, the past attacks with a vengeance. It’s a good reminder that puppy love eventually grows up and turns into something with sharp teeth and one hell of a bite.

She never asked for the keys to the kingdom. She’d much rather go out and build her own.

I had no plans to leave the Point. It was ugly, mean, hard, and unforgiving, but these streets were home and I couldn’t imagine being happy anywhere else. This place had long since made my hands and the edges of my soul dirty. It was something I would be hard-pressed to hide should I go anywhere else. I’d have to spend my days trying to camouflage the filth I was so familiar with. Here, no one looked twice at the pretty teenager with shadows in her eyes and blood on her hands. I was one of many.

I wasn’t interested in leaving behind my sister or her fiancé, Race. We were an odd, dysfunctional family, but we made it work.

I didn’t want to be too far away from my mother, who was living in a group home as she slowly, painfully tried to recover from her alcoholism and PTSD from an accident she caused that ended up taking the life of a young mother and her child.

But more than anything, I absolutely didn’t want to leave him.

I couldn’t imagine a day going by without catching a glimpse of Noah Booker. I mean, he was impossible to miss. Six-and-a-half-feet tall, body built like a professional athlete, dark and brooding with the prettiest gunmetal-gray eyes, he was the entirety of every one of my teenage fantasies. I barely noticed the jagged scar dividing one side of his face. White and raised, it cut one of his black eyebrows in half, slashed over a high cheekbone, and ended somewhere under the chiseled edge of his hard jaw. He never talked about it, but Race, Booker’s boss, let it slip that Booker got the scar when he was locked up. Or maybe it wasn’t as much of a slip-up as a thinly veiled warning. Race never kept it much of a secret that my infatuation with his massive, dangerous, ex-con enforcer made him extremely uncomfortable. He’d warned me over and over again that Booker wasn’t for me. And he’d made it clear to the man who broke knees and smashed heads for a living that he was to stay as far away from me as possible.

They called it puppy love. It wasn’t.

To me, it was a vicious kind of love, filled with teeth and claws that I could feel digging at my insides every single time someone patted me on the head and told me how young I was, how much life I had yet to live. This love was rabid, and I was tired of having it on a leash. I wanted to let it free, wanted to let it sink its razor-sharp fangs into the man who had awoken the primal need inside of me. It was only fair he felt the same kind of crushing bite and painful pressure around his heart that I did every single day.

I was solely focused on getting to Booker. It barely registered I was done with high school and had new doors opening all around me. I couldn’t care less about getting my hands on my diploma. A piece of paper with Karsen Carter written on it in pretty calligraphy meant exactly nothing to me. The only thing I was focused on was the fact I was finally old enough to make my own choices. And I’d always picked Booker. Over and over again he was my number one priority.

Jay Crownover is the international and multiple New York Times and USA Today bestselling author of the Marked Men Series, The Saints of Denver Series, the Point Series, the Breaking Point Series, and the Getaway Series. Her
books can be found translated in many different languages all around the world. She is a tattooed, crazy haired Colorado native who lives at the base of the Rockies with her awesome dogs. This is where she can frequently be found enjoying a cold beer and Taco Tuesdays. Jay is a self-declared music snob and outspoken book lover who is always looking for her next adventure, between the pages and on the road.