LK Collins shows her softer, sweeter side with a just a tiny touch of dirty thrown in for good measure in this quick trip to St. Helena and the wine country of California.

Hope has been running from everything – her past, her hurts, and definitely the ex that broke her confidence and belief in love. Since leaving Portland, Oregon, Hope has been filled with wanderlust simply trying to find the place that she calls home. As a freelance journalist she can work anywhere and has. Her wondering leads her back to the place that she lost the most important person in her world – her mother. But sometimes you truly cannot go home. Loaded with her mother’s prized laptop, Hope heads to St. Helena and encounters a man named Chase who will change her life.

I did so love Chase’s case of insta-love. It was magic from the time he locked eyes on Hope. There was no slowing down once these two kissed. It was as sweet as it was steamy and I had so much fun falling for these two. Hope has had so much heartache – from the death of her mother to the ending of her relationship with a man she believed was her forever. The happily ever after she and Chase catches is very well earned.

Now as for that brother of Chase’s? Colt, oh you bad boy! I cannot to read your story! Great job, LK! 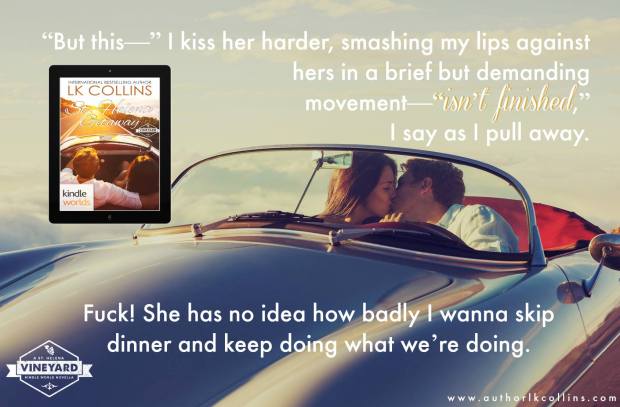 For Hope Allanis, life has always been filled with regret. The decisions she’d made have put her into bad situation after bad situation. Leading right up to this moment. With the open interstate in front of her, she drives away from the life she once knew. Needing to get away from this place, from this life, and most of all . . . from him. But when her journey on the open road takes Hope to California’s wine country, it feels different.

For the first time in forever, it feels right.

Chase Hayes has searched for the purpose of life for as long as he can remember. Now, with Hope in town and their instant connection, he feels like he might have found it. The problem is, St. Helena is just another stop for Hope along her journey, not her forever, or is it?

Will Hope’s St. Helena getaway lead to the place she can finally settle down and call home, or will it be just another X on the map marked with regret?

“Hope!” he yells my name, his desperate words piercing my ears as I slam our front door closed. My blood is boiling in a way it never has before, my emotions all over the place, fighting between anger and rage. Everything I was once so sure of, now all washed away because of one decision he made.

Getting into my car, I shut the door and look back at our house. There had been so much promise behind those walls. No, we don’t own it, but we had plans. Plans to one day get married and start a family there.

My knuckles are tight around the steering wheel as I remember actually why that dream just died. Betrayal is a nice way to describe it. I grip harder, wanting to take my anger out on something, pretending as if it’ll solve my problems even though I know it won’t. There is not a thing that will solve or fix this.

As I drive away, my eyes keep glancing to the rear view mirror, to the house I just stormed from, to the house I will never step foot in again. He lied to me beautifully and had done it for so long that I think he believed what he was doing was okay. I don’t think he realized it wasn’t okay until I caught him and all the lies came crashing out into the open.

God, I had not been anything but a puppet in his game of life.

Anxious to get away from this place, this city, this life . . . from it all, I turn onto the onramp for the interstate and don’t want to ever look back.

My mom’s voice rings in my head, “Please don’t go, Hope.” I should’ve listened to her and never left in the first place. If I had, this never would have happened.

It is one of the last things she ever said to me before she had the massive stroke that took her from this world and from me. Her words and panic over my moving away with a man I’d barely known now make so much sense. Had she known how horrible of a man Mitch was and that I’d end up heartbroken? Probably. She also probably stayed silent because she knew I wouldn’t have listened.

Or had she begged me to stay because she had known her time was short? I didn’t know if that was something a person knew or not, but I sometimes wondered if my mother had a feeling deep inside her and that was why she wanted me to stay so badly.

My cell phone rings, and when I glance down to see his name and deceitful face across the screen, I roll my window down and impulsively toss the phone out. It bounces against the pavement of the highway. Belatedly, I glance to my mirrors, worried about a car having to swerve to avoid flying projectiles. Thankfully, since it’s so late, there aren’t any other cars around.

Pressing harder on the pedal, I wish I could go home. I wish I could crawl into my mother’s arms, but I can’t. My current destination is unknown, and even with the fear of having nowhere to go, the farther away I get from Portland, the better I feel. Ever since moving there to be with Mitch, something inside me hadn’t felt right.

God, what I’d do to feel right in my own skin again.

I should’ve listened not only to my mom but also to that feeling deep in the pit of my stomach. If I had, maybe then I wouldn’t be in the pain I am now. 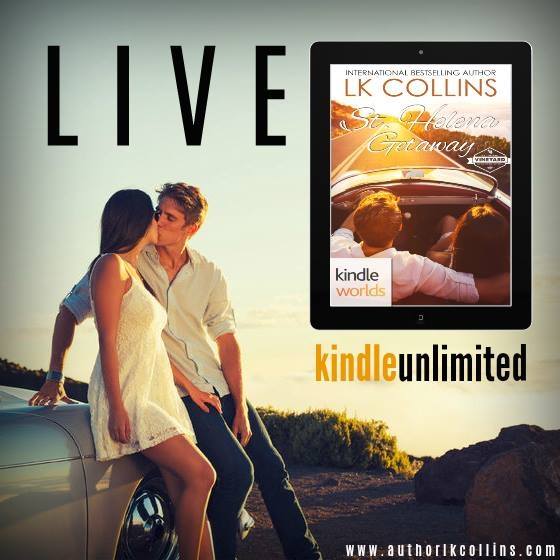 LK Collins is the naughty alter ego for the husband-and-wife duo behind multiple bestselling and international bestselling novels. This real-life couple is downright dirty in the bedroom, which bleeds through the pages of their steaming hot stories. While LK writes the books, Mr. Collins, the tattooed god himself, is the mastermind behind so much of the page-turning sexiness.

If you are looking for a scorching read with chemistry so intense it jumps off the pages, then an LK novel is for you. From standalones to series, their stories will have you blushing and panting, ready to reread them the moment you’ve finished. The heroes are alpha, demanding, filthy-talking men that will do anything for their girl…or to get them.

Check out The Prezident’s Graphics Company