With each story that Jay Crownover pens to life in The Point/Breaking Point series, I FALL HARDER IN LOVE!!! With each story, I sink so far into this saga that is the best fusion of villains and heroes! With each story, the line is blurred among the Marked Men and those dark heroes of The Point where I am almost hard-pressed to choose a favorite.

Dignity struck my soul like a match, lighting it on fire, as I burned in anger as much as I bled tears. This broken hero and heroine made me break, shattering into pieces, where I wanted justice for them. I wanted revenge. I wanted to avenge … every wrong … every piece of past and present pain that hit these characters … EVERYTHING!!! 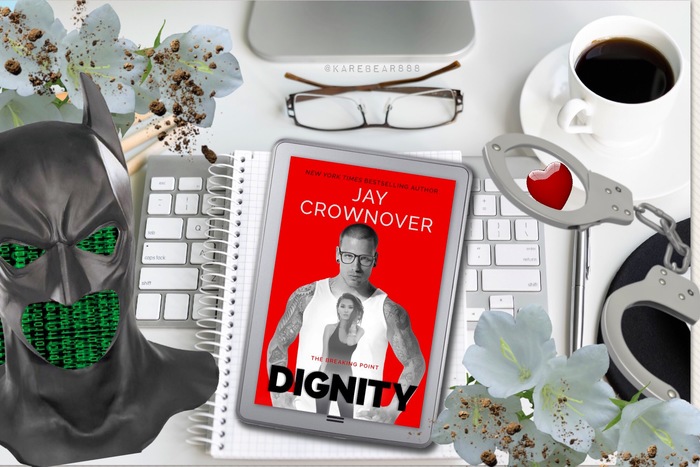 Stark, this dark hero supposedly without a heart, stole my heart! This hot nerd has all the intelligence and power. His pain was mine. Stark set me on fire! My body was on fire while my heart bled. This alpha was my addiction.

No one was ever really sure if I was friend or foe.

Stark tows the line between hero and villain. His heart is made of ice until one woman made it melt.

”Sometimes you find the person who makes you want more, and you have to decide how much you’re willing to give.”

Noe is as equally brave as she is beautiful. This heroine has strength in spades but her smarts stand out most of all. I loved her strength and admired her courage to risk it all for justice like the superhero she has become.

The guy was a monster and I loved everything about being pinned and held against all that strength.

A fight for justice mixed with a quest for survival bring Now and Stark together. United against evil.

”What makes you think this is a fight we can win?”

“Because I can’t afford to lose again.”

Though it’s the fire that burns between Noe and Stark that is impossible to ignore. Their intelligence ignites as much as that fire where I felt an UNDENIABLE PULL between this hero and heroine.

Together, Noe and Stark are mesmerizing … just magical! This is a couple fighting fate and all the odds. I loved watching them conquer their demons! Stark and Noe have a shared bond that neither can grasp nor get….one not of merely lovers but of intelligent and powerful equals…one of perhaps soulmates.

Dignity is a deep dive of mind and matter where every word matters!!! Brains are even sexier than beauty and brawn. I loved the ultra smart hero and heroine who were even stronger superheroes together. In this SOUL SLAYER, intelligence rules and is a weapon of reckoning that wrecks havoc in an ALLURING world where heroes are and villains are heroes.

Bad has never been so good!!! Jay Crownover makes you love the ‘baddest’ of bad boys in her powerful The Point and Breaking Point novels, the men who sway from criminals to heroes, the boyfriends that mothers would hide from if you brought them home, the boys you should probably run from too…but you won’t, as you can’t help but adore these saints and sinners.

Jay Crownover’s writing reaches inside deeply, grabs your heart, holding it in its hands, and then both hits and hugs it so hard. Her stories—as insightful as they are emotional—make you THINK as much as FEEL. This visionary writes words that delve deeply into complex characters that are always so much more than their names, reputations, pasts, and more.

People were always something more than a simple label.

With each story Jay Crownover brings to life, I fall deeper into her spell that I’ve dubbed ‘Crownover Crack’ since meeting this author’s first masterpiece, Rule, years ago. This author opens your eyes with her words where you will find yourself quickly removing any preconceptions you may think or feel. I’ll never stop loving the best blend of black and white that Jay Crownover writes.

Dignity is ELECTRIC—an EXHILARATING RUSH of a romance that bleeds black and white into the perfect shade of gray. This SOUL-THRASHING story leaves judgement at the door and shows the finest of lines that exist between good and evil. Dignity hit my heart hard, wrecking it—wrecking me—in the best way!!! I LOVED this romantic thriller!!! Both haunting and heroic, Dignity is a HEADY and HEART-POUNDING JOURNEY worthy of its title and more!

Looks can be deceiving.

I knew that most people took one look at the ink and the impossibly big and strong body it covered and decided I was a brawler…a bruiser…a beast. However, I was hardwired to be a thinker, not a fighter—my mind being my greatest weapon and my biggest weakness.

I should have chosen to use my brain and talents to be one of the good guys, a hero, a man with dignity and worth.

I turned my back on dignity and sold my soul to the highest bidder, deciding to dance with the devil, instead.

I couldn’t figure out how to help myself, so there was zero chance I knew how to save someone else.

That someone else was Noe Lee. She was the unkempt, unruly thief who was just as smart as I was and twice as street savvy. She was annoyingly adorable beneath the dirt and grime and she was in trouble. In way over her head, I told myself it wasn’t my job to keep her from drowning. In the Point, it was sink or swim and I wasn’t the designated lifeguard on duty.

I had shut the door in her face, but now she’s gone…vanished…disappeared without a trace. It took less than a second for me to realize that I wanted her back.

When a woman comes along that melts all the frozen, hard things you’re made of, you’ll do anything you have to, to bring her home.

What you see is not always what you get…and with a man like me there is more than anyone ever bargained for.

Protective and possessive instincts coiled around my gut and rage felt like it was going to choke me. I was so used to being cold and numb, I didn’t know what to do with the fire that was licking at my insides.

“I saw him take her out of the trunk when they got to the docks. He moved like a cop. Not the kind who is there to actually protect and serve, but the kind who pulls you over for no reason and slaps cuffs on you to prove a point. I was locked up for a lot of years, boy genius. I know what a dirty cop looks like. He had a busted-up nose and stitches on the side of his face. Should be pretty easy for Titus to identify him.”

Titus King was Bax’s half-brother and the only law enforcement officer in the entire city any of us slightly trusted. He was one of the few men the Point hadn’t tainted. He was a good guy, trying to do right by the people in our city, and he wouldn’t hesitate to throw Goddard’s dirty cop under the bus. But I didn’t want anyone going after the Mayor. His sadistic ass was all mine.

“Do you think they made it out of the container after you hit it with the truck?” That had been my idea. Nassir was only sending in Booker and Benny to get Noe out, but I didn’t think it was enough fire power. Since he refused to let me go, even siccing Chuck on me as a babysitter until the job was done, I made Benny go over the plan with me no less than a hundred times until I came up with a better one. Knocking the container sideways with one of the big semi-trucks that littered the area would give Benny the time he needed to get Noe out and distract the outside security detail enough that Booker could do his thing. It was a risk because the people inside the container—including Noe and Benny—might have ended up injured when the thing flipped, but the odds of them making it out were much higher than if Benny tried to take on everyone on his own.

“If Benny made it out, we won’t hear from him again. That was the deal he made with Nassir. He would get your girl and then disappear, so he can go and live happily ever after with his. As for the rest of them,” he shrugged, “I guess we’ll find out soon enough. Your girl said someone had a gun, so if they were shooting at Benny, he would do whatever he could to make sure they stopped. He’s not about to catch a bullet for any of us. I know you want that asshole alive for your own reasons, but honestly, it’s better if Benny popped him.”

It was better, but it wasn’t what I wanted. A bullet between the eyes was way too easy for a guy like Goddard. People would bemoan how bad the Point had become, how Goddard had been a staunch supporter of crime prevention measures. He would die a martyr and a legend. I couldn’t stand the thought of that. I wanted who Goddard was, who he really was, out in the open. I wanted his mansion doors flung wide open and every skeleton inside the walls exposed and thrown out on the perfectly manicured lawn for the entire world to see. I hated people who hid behind the law. I hated when men in any position of power got off on using their elevated status to jerk the helpless and hopeless around. Death wasn’t the answer. Devastation was.

I closed my eyes and squeezed the cold, still hand that was clasped in mine. Failure weighed heavy on my shoulders and fury lit up my blood like popping and sizzling firecrackers.

Booker grunted and I felt him move behind me. “It happens. It doesn’t seem like better should be able to find a foothold in this place, but despite all odds, it does.”

Jay Crownover is the international and multiple New York Times and USA Today bestselling author of the Marked Men Series, The Saints of Denver Series, the Point Series, the Breaking Point Series, and the Getaway Series. Her books can be found translated in many different languages all around the world. She is a tattooed, crazy haired Colorado native who lives at the base of the Rockies with her awesome dogs. This is where she can frequently be found enjoying a cold beer and Taco Tuesdays. Jay is a self-declared music snob and outspoken book lover who is always looking for her next adventure, between the pages and on the road.