The Impossible Vastness of Us by Samantha Young

Sometimes you read a story that you KNOW from the start will stay with you forever. A story that just sticks. A story that swiftly works its way into your heart. A story that means the world while becoming your world. Entrancing and emotionally-charged, The Impossible Vastness of Us is an inspirational story of young love that imprints on the heart and soul. 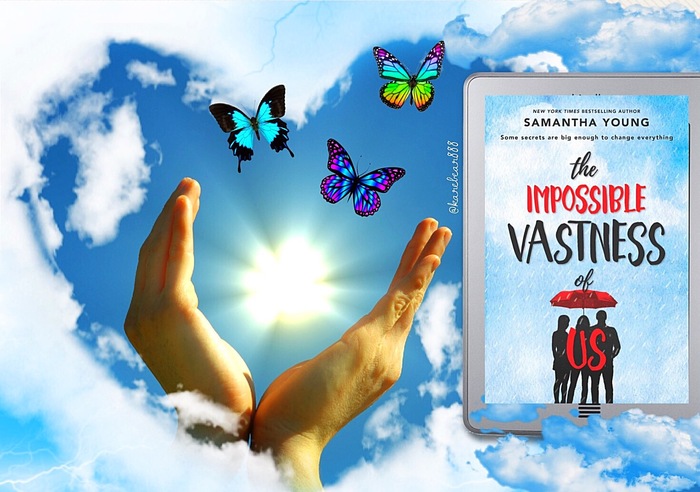 I delved into rare territory, a young adult romance, and oh was The Impossible Vastness of Us an incredibly MOVING and MESMERIZING journey. The fierce and fiery angst of this teen romance made my pulse pound and my heart beat out of my chest. The characters are full of fire with a story so heady, harrowing, and heartfelt.

India is the youngest and strongest heroine I’ve encountered in a long time. A warrior, India is young but has already lived a life of hell. This beautiful girl bravely hides a shattered soul. I admired India a lot!!!


I was probably insane to even think about him — this beautiful, rich boy — but he was getting to me. Nobody got to me.

Finn is gorgeous, tall, athletic, and insanely rich. He, like India, is broken but wields a sword of bravery in spades. I LOVED this hero so much!!!

Broken sees broken, and Finn and India are two shattered souls trying to be whole.


I saw him. I think he was the first person I’d ever truly seen and I couldn’t help it — I wanted him to see me, too.

Passion penetrated me, these words so poignant. I cried so many tears of sadness and sweetness. I felt each word slice through me, my emotions enveloping me where I was ALL IN this story.


“Most of the time I feel like I can’t breathe inside my own life. Like I’m just existing. Not with you, though. I feel like I’m breathing fresh, clean air whenever I’m with you. I feel alive.”

Finn and India’s connection is MAGICAL!!! I loved this heart-wrenching and heartwarming romance that made ME FEEL ALIVE!!!


“Freedom is bigger than us.”

Heart-pounding, butterfly-fluttering, soul-shattering, feels flowed through me fast and furiously as The Impossible Vastness of Us touched me every part of me. Like a gaping wound, this story cut me open as it bled angst, exposing every emotion. All of the words made me FEEL ALL OF THE THINGS!!!

The Impossible Vastness of Us is an emotional explosion that BLEW ME AWAY from beginning to end. I was OBSESSED with and OWNED by this romance. Samantha Young brilliantly brings characters to life that captivate through a journey of heartbreak and healing. You NEED to get touched by this UNIQUE and UNPUTDOWNABLE ROMANCE. HEARTBREAKINGLY BEAUTIFUL and UTTERLY BRILLIANT, The Impossible Vastness of Us is an unforgettable coming of age love story you’ll feel forever.


“If something bad happens to you, it’s up to you how you let it change you — you either become more compassionate or you let it make you bitter.”

“I know how to watch my back. I’m the only one that ever has.”

India Maxwell hasn’t just moved across the country—she’s plummeted to the bottom rung of the social ladder. It’s taken years to cover the mess of her home life with a veneer of popularity. Now she’s living in one of Boston’s wealthiest neighborhoods with her mom’s fiancé and his daughter, Eloise. Thanks to her soon-to-be stepsister’s clique of friends, including Eloise’s gorgeous, arrogant boyfriend Finn, India feels like the one thing she hoped never to be seen as again: trash.

But India’s not alone in struggling to control the secrets of her past. Eloise and Finn, the school’s golden couple, aren’t all they seem to be. In fact, everyone’s life is infinitely more complex than it first appears. And as India grows closer to Finn and befriends Eloise, threatening the facades that hold them together, what’s left are truths that are brutal, beautiful, and big enough to change them forever…

“India, I’m not using her. I mean, I am, but it’s not like that. Eloise is getting what she wants out of this relationship, as well.”

“You are using her.”

“I’m not.” His chair screeched as he pulled it closer so our knees touched. His dark eyes moved over my face and I sucked in my breath at the open appreciation I saw there. “I’m not using her…but we are in a relationship together. I guess it just never occurred to me that I might actually meet someone in high school. Someone I…”

That feeling in my chest, that thick, hot feeling, threatened to overwhelm me at all the things he wasn’t saying. “Finn, Eloise is going to be my family.”

He looked so forlorn it took everything within me not to reach for him.

“What is it you’re hiding?”

Hurt and frustration swept through me in equal measure but I tamped it down. It wasn’t my place to demand his secrets.

My frustration was suddenly mirrored in his eyes as he looked up at me. “I wish things were different.”

But they weren’t different. And yet they were the same, history repeating itself. I cared about someone and they didn’t care enough about me back to be honest about what was really going on.

I didn’t know if I was angry at Finn or just angry that nothing ever seemed to be easy for me. Everything was always a fight.

It felt like I lived in a constant clusterfuck.

I gave a huff of laughter. “Story of my life.” I shook my head, grabbed up my bag and, unable to look at him, said, “Thank you for your help tonight.”

“You’re not leaving without me.”

His protectiveness confused and pissed me off even more. “I’m not? Funny, it looks like that’s exactly what I’m doing.”

His familiar scowl was back in place at my sarcasm. “You’re also not going home alone after what happened here. I’ll give you a ride.”

Sadness flittered through his eyes before he managed a carefully blank expression. “I think I can handle driving you home.”

Still a trembling mess after everything that had happened, I gave in and followed Finn out to his car.

The tension that we’d shared before was nothing compared to how it was now. Now that Finn had in a roundabout way admitted he liked me and I’d realized that what I was feeling for him was attraction, the tension could not be mistaken for anything else but sexual.

I’d never felt anything like it before—it was the most frustrating, scary and exhilarating feeling in the world.

I felt like we were to blame for the whole thing but I didn’t know why.

I hadn’t asked the universe to make Finn like me.

And I had definitely not intended to like him in return.

“India,” he said just as I moved to get out of his car. “I’ve never really cared what anybody thought of me before…but I really don’t want you to think I’m a bad person.”

I stared into his beautiful eyes. “I can’t imagine ever thinking you’re a bad person. I meant it earlier…thank you for coming for me tonight. I’ll never forget it.”
“This feels weirdly like a goodbye,” he said with a bitter twist to his gorgeous lips.

“Maybe it is. I guess we’re both just a complication the other doesn’t need.”

Slowly, so slowly my heart had time to increase in hard, steady thumps, Finn slid his hand over the center console between us and stroked his thumb along the side of my hand. I felt that simple touch in every nerve, my body reacting to it in a way it never had to the touches and deep kisses that had come before it.

I stared at our hands for a moment, wondering how different my life could be if Finn wasn’t Eloise’s boyfriend, if we’d just met as strangers at school, felt the inexplicable bond between us and were free to do something about it.

Suddenly very aware of how long I’d been sitting outside the house in his car, I fumbled for the door handle. “See you around, Finn.”