4.5 stars
I have been a huge fan of the blasphemy series since the beginning. This book was so much different than the rest of the books  in the series. It was a little lighter on the BDSM side and more emotional.
I loved how Hartley, Cruz , and Jonathan started their relationship and it built quickly while they we’re closely working on Hartley’s boat even though they had no  time for extra jobs. Jonathan just had an instant connection with her. When Cruz met her,  he felt it too.
The other catch to the story is that Jonathan and Cruz were  best friends for 20 years and both had a desire for the other that they we’re both keeping under wraps for fear that that it would ruin their relationship.
Overall,  another great read from Laura  and the Blasphemy series. I highly recommend. BTW it gets a 10 for heat factor!

Best friends Jonathan Allen and Cruz Ramos share almost everything—a history in the Navy, their sailboat building and restoration business, and the desire to dominate a woman together, which they do at Baltimore’s exclusive club, Blasphemy. Now if they could find someone who wants to play for keeps…

All Hartley Farren has in the world is the charter sailing business she inherited from her beloved father. So when a storm damages her boat, she throws herself on the mercy of business acquaintances to do the repairs—stat. She never expected to find herself desiring the sexy, hard-bodied builders, but being around Jonathan and Cruz reminds Hartley of how much she longs for connection. If only she could decide which man she wants to pursue more…

A Special Cross-Over Release with Jennifer Probst’s Reveal Me from her Steele Brothers Series!

Don’t miss the previous standalone books in the Blasphemy Series! 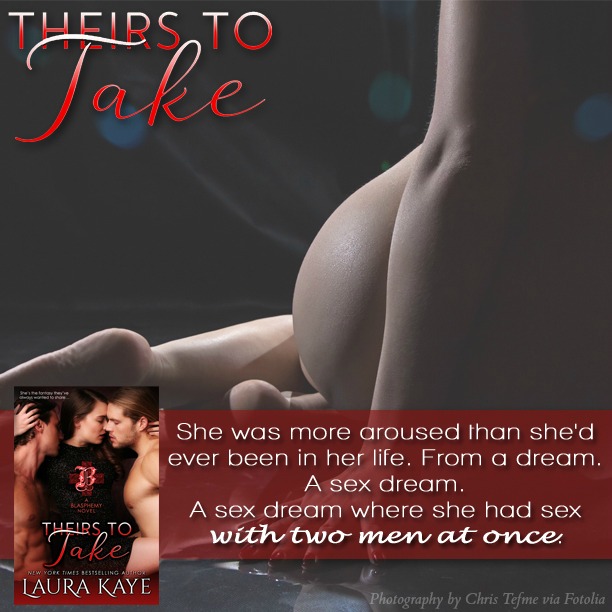 I’m thrilled to be celebrating the release of my super hot and emotional Theirs to Take, the next erotic standalone romance in my Blasphemy series, about the twelve Masters who run and play at Baltimore’s most exclusive club. Theirs to Take is a sexy menage about what happens when two prior navy best friends and business partners meet a woman who makes them admit to desires they’ve never before voice. I think you’re going to love Jonathan and Cruz! I know I adored writing them! Even more fun, there are characters and scenes in Theirs to Take that cross over with the amazing Jennifer Probst’s brand new Reveal Me – and the best part is that both are standalones so you can dive right in!

Now, read in for a taste of Theirs to Take…

Hartley woke up to the image of Jonathan’s handsome face mere inches from her own. She smiled, because in the peace of sleep, he appeared younger, and she could almost imagine him at eighteen, tanned with sun-streaked hair, racing into the waves, a board under his arm.

But she didn’t want the boy he’d been. She wanted the man he was now. She peered up over Cruz’s ridged stomach at his ruggedly handsome face and the tribal black ink running down his upper arms. Yeah, she wanted the men that both of them were. Sailors, veterans, builders, friends. Men so confident in their sexuality that they could share a woman with another man.

At least, she wanted to explore this thing between them. It wasn’t just that the sex had been amazing—which it had—it was that they’d made her feel so damn special. More than that, they’d made her feel a part of something bigger than herself. For the first time in so long.

And that feeling combined with being surrounded by all this sexy, hard flesh had arousal stirring in her blood again. It was like that dream she’d had, only better. Because this was real.

She shifted, and Jonathan’s eyes blinked open. One side of his mouth lifted in a little smile. “Hey,” he whispered.

“Hey,” she whispered back. Mentally, she debated, and then she decided to follow Scarlett’s advice once more. Just go for it. “Tell me…tell me to do something.”

He arched a brow, heat chasing the lazy sleepiness from his gaze. “You need us again.”

It wasn’t a question, which made his words about a million times hotter. He understood what she was asking him. “Yes,” she said.

“Then suck Cruz’s cock,” he whispered.

The command made her pussy clench with need. Wanting to wake Cruz up with her mouth, not movement, she shifted as gingerly as she could. And then she took his cock into her mouth and tongued and sucked him until he grew against her tongue.

“Eyes on me,” Jonathan said. She complied readily, hungrily. “That’s it. Make him hard.” His hand stroked the back of her hair, each stroke a little more firm than the last. As if to let her know that he could hold her down on that cock at any time.

Annnd that thought had her suddenly wet between her legs.

“Fuck,” Cruz rasped, stirring beneath her. His hand fell against her head, too.

A moan spilled from her. She loved the feeling of both of them guiding her mouth.

“She likes our hands in her hair, Cruz,” Jonathan said, eyes locked on hers. “Don’t you?” She nodded as much as she could with her mouth full.

Now Cruz was the one groaning, and Hartley couldn’t help but thrust her hips against the bed.

“God, I want to fuck her mouth, Jonathan.”

“Would you like that, Hartley?” A fist in her hair, he urged her head up. “Tell me.”

“Yes,” she said, wound incredibly tight from just a few moments of their dominance. “I would love that.”

“Then tell him. Tell Cruz to fuck your mouth.” Jonathan’s stare was dark fire.