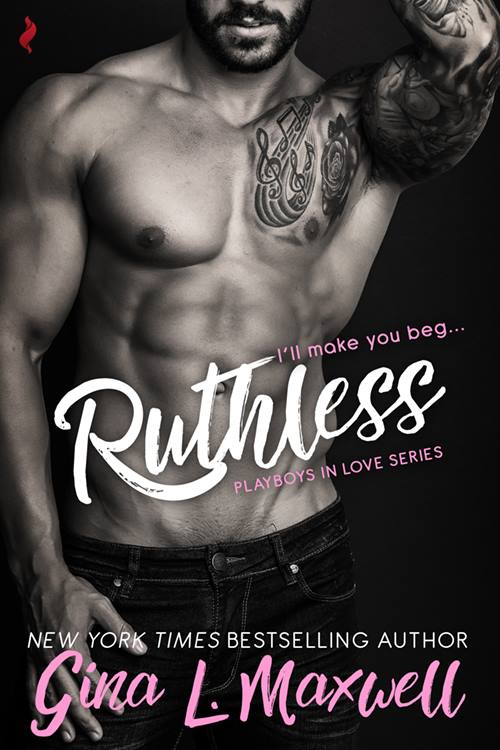 Gina Maxwell’s latest heart-thrashing romance, Ruthless, was the predator and I was the prey. This scintillating and spellbinding story pounced on me, holding me in its clutches, where I could do nothing but submit to this UTTER BOOK BLISS that was Ruthless. Ruthless is a scintillating and scorching romance that burns the body and seduces the soul. 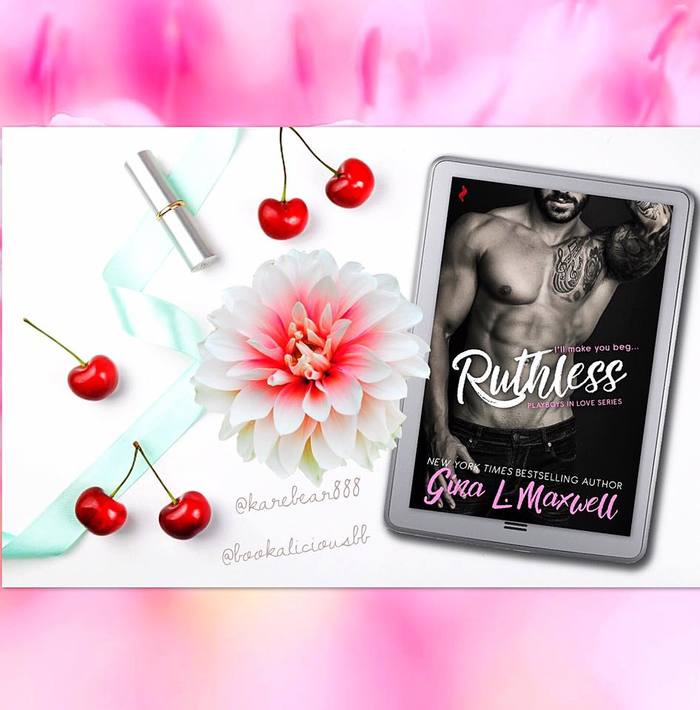 I fell in INSTANT LOVE with Ruthless, an achingly addictive love story that held me hard…captivating me…consuming me…claiming me. Ruthless quickly staked its claim; this story unequivocally OWNED ME. I bled in angst. I burned in need. I was engulfed in flames, a fire that sparked into a full inferno. I could not put this fierce and flaming tale down. Alluring. Amusing. Angst-ridden. All-consuming. I WAS ALL IN!

I knew I would love the blonde, blue-eyed, and long-legged Addison ‘Addie’ Paige when I met her in the previous book, Shameless. Addie is one of my favorite heroines ever!!! Beautiful, brainy, and badass, Addie is a hero with whom I identified immediately. She throws down sass like a fighter in the ring, and oh was she hilarious! My inner honey badger definitely approved! 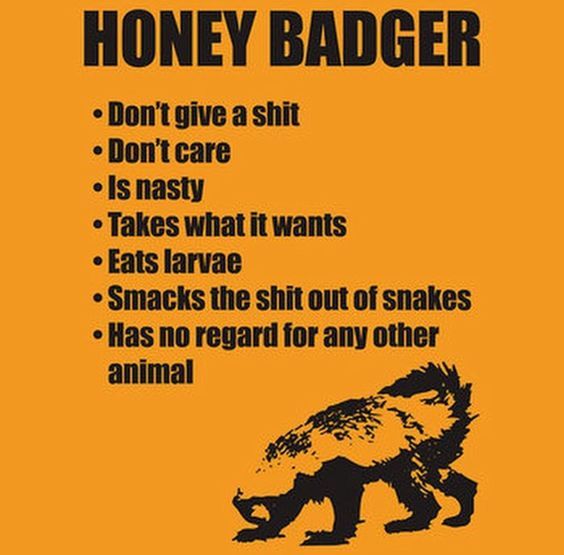 “I’m like a f**king honey badger. Everyone knows honey badgers don’t give a s**t, and neither do I. Because if you tell me I can’t have something I want, I’ll only fight that much harder to get it.”

Addie has big lady balls and she knows how to use them! She knows what she wants and goes after it…or him. The he in the oh-so-hot equation is the cobra she wants to lure, Roman ‘Ruthless’ Reeves the best friend of her best friend’s boyfriend. Roman looks like a Roman god with his tall and chiseled body made of pure muscle, pierced in the right places, and sky blue eyes with black, and bed-head hair. A laced up law firm owner by day, Roman, and hot, pierced, bad boy at night, Ruthless. This beast doesn’t stand a chance against the ball crusher, honey badger, Addie…or does he?!?

“Ooh, you’re good. Then again, so am I, because here you are. Maybe you came out here because you want me as much as I want you.”

“Oh, baby boy. I don’t need to flatter myself. Your c**k is doing a great job of that all by itself.”

Roman fires off shots but Addie fires back in blazing banter. Their banter sizzled off the pages, and oh was it a HIGH! A blurred line lingers between predator and prey. The mix of sass and smolder was pure intoxication.

“This woman is driving me insane. The wildcat actually taunted me then strutted away like there’d be no repercussions. My instinct is to give chase, to dominate my prey until it submits beneath me, is overwhelming. And Addison is about to learn what happens when you rouse the sleeping beast.”

The more the honey badger taunts the lion, the more he wants to play. This honey badger may have finally met her match, a lion who seizes the control she usually carries. It’s too bad that Roman is Addie’s boss and she’s the forbidden fruit he wants to taste.

“There’s a voice in my head urging me to let go, and a big part of me that desperately wants to. I want to fall with this man who’s dominated my fantasies for months…All I have to do is be brave enough to trust that he’ll be there to catch me…and let go.”

Addie wants to cede control and let this beast have his way with the beauty, this boss who blazes her body across the room, the man who was hers for one night of the hottest sex of her life before she worked for him. Forbidden fruit be damned.

“I feast on her p***y like a condemned man with his last meal and watch with depraved satisfaction as rapture devours the last of her inhibitions.” 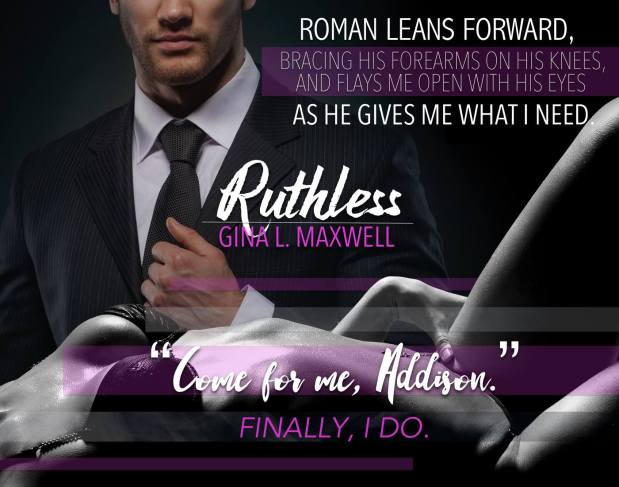 I. WAS. ON. FIRE. Roman’s dirty talk scorched me from head to toe even more. The heat set me ablaze, as I burned along with this sensual and seductive story. The forbidden fanned those flames of fire, sparking even more desire. Ruthless attacked me, as I tried to control my clenching thighs, pounding pulse, racing heart, and burning body. Oh my thighs was Ruthless OFF-THE-CHARTS HOT!!!

“I realize that Roman hadn’t merely touched my soul…he’d claimed it for himself.”

Their friendship has caught on fire, feelings loom, and the honey badger and the lion who have forever fought off love, may be helpless to its power.

“I gave into the blue-green depths of her eyes, drop my defenses, and as we crash over the edge together, I offer her the only thing I have left to give. My soul.”

Smolder turned into SWOON as my head found its way into the clouds, my body that blazed before now floated on air. Oh did Roman POSSESS ME!!! This amazing alpha made me swoon and smolder. This man is pure perfection. I was owned by Roman. I was owned by Ruthless.

“The honey badger has been in hibernation for quite some time now, and at this rate, I’m not sure if she’ll ever be back.”

Will one of these predators or both become prey? Will both the honey badger and the lion relinquish control in the name of love?

Raw and ruthless…smolder and soul. Ruthless, oh what a sweet surprise you were! While I expected Ruthless to turn me into a minx, I did not expect the assault on my heart that happened when this sexy and soulful story stirred up the feels, a surprise storm of sensations. I LOVED THIS STORY SO MUCH!!!

Ruthless sizzles and slays in a seductive story of forbidden love that is PURE PERFECTION. The entertaining and enticing writing along with powerful metaphors were INCREDIBLE. The delicious and dirty talk along with combustible chemistry of the characters were HOT. The banter and angst were ADDICTIVE. The penetrating passion was INTENSE and INTOXICATING.

Ruthless was my anguish…my ache…my addiction. Ruthless was my drug and I could not get a big enough hit. I left this story wanting more…needing more. Ruthless…that it was as you don’t stand a chance not falling in love with this combustible and consuming book that Gina Maxwell penned to perfection and so brilliantly brought to life.

People call me Ruthless for a reason.

Whether I’m in the court room or in the bedroom, my reputation is well-earned. I’m either working hard, working out, or working my way into some woman’s panties. But none of them share my particular kink, and I walk away feeling unsatisfied.

Until I met her.

She’s a friend of a friend, which makes her off-limits in my book. But then temptation had me by the balls and I had her up against a wall. She literally fucked my world off its axis, but it can’t happen again.

My plan was avoidance, but that got blown to shit when my firm hired her as a new junior attorney. Now I’m her boss, and I’m supposed to act like I don’t want to bend her over my desk every five minutes.

But I’ve never held myself back with anything before, so consequences be damned, it’s time to show her how damn good it feels…to be ruthless.