When I started reading Hostile Workplace I thought I was going to get a hot and humorous enemies to lovers book that would make me laugh and swoon and burn up a bit. And I did at the start but what soon develops alongside while reading Hostile Workplace is a deep, heartbreaking story that tugs at every part of you. At times I was left gasping because my heart couldn’t take it. The way everything played out was magnificent. Honestly AM Madden seriously worked some major magic with this book.

Sam and Lydia’s relationship is heart breaking to say the least both spun tales of lies and betrayal, both left with six broken years that they haven’t recovered from. However despite all their time apart their connection was electric and the love/hate banter was off the charts.

This book has been super hard for me to review because it contains some major jaw dropping moments and some spectacular twists. I darent give those away because it really adds to the impact of this story. So I’ll stop here.

All in all Hostile work place is a hot, heartbreaking read. Perfect for people who love friends to lovers and second chance romances.

Sam Stanton knows these simple facts:
~ He is a great catch—successful, smart, gorgeous…but the wrong woman caught him.

~ He has the perfect girl who is madly in love with him.

~ He wasted six years of his life by playing it safe.

~ He is damn good at his job and intends to keep climbing the ladder.

~ He can’t get her off his mind or out of his heart—no matter how hard he tries.

But, what he doesn’t know is just as important:

~ Will he ever really move on and forget how badly she broke his heart?

~ Should he settle for a sure thing, even knowing it’s the wrong thing?

~ Can he give up his career for a chance at happiness?

~ Does he correct one mistake with another?

~ What would he do if she were to return? 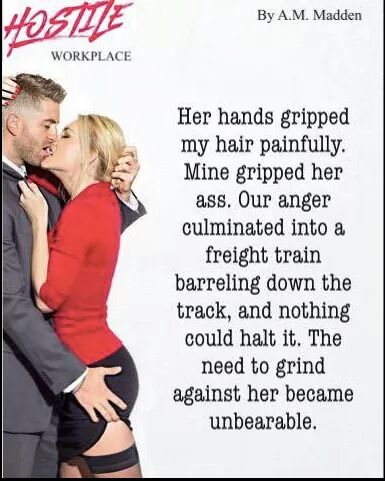