I just watched the AMAZING USA women’s gymnastics team win the team gold in Rio. They were on fire! Brilliant! The Final Five… so talented and made this Olympics so much fun.

It just made me love this book that much more.

Carrie Aarons – a former gymnast herself – has written such a fun, fast paced look into a girl who has sacrificed everything to reach the penancle of success in gymnastics. Her chance to have that gold around her neck in Rio is right within reach – if only she can conquer her fear of falling. This is also the story of a boy who was at the top of his career, the Olympics within his grasp when a tragic injury changed all his dreams forever and ended any chance of becoming an Olympic champion. Natalia Grekov and Spencer Russell embark on a most unconventional and even a little bit forbidden romance between a coach and a gymnast, coupled with the excitement of a chance to see all her hard work come to fruition.

They are attracted to each other from the moment that they meet. Though she wants very much to act on the attraction, Nat must focus on her goals. Emotional ties, especially ties to a coach, are not a part of the plan. Spence can’t seem to shake Nat. He wants her but understands her dedication to her craft. But he sees an opening and takes the chance. He will help Natalia overcome her fear of falling and help her to prefect the dismount that may win her Olympic gold. As they work together, the attraction only gets stronger and stronger until finally there is no way to stop the inevitable. In a tangle of limbs the couple agree to keep their relationship between them.

But even the best laid plans don’t always come together.

This was an inside glimpse into the joy and passion of the competitive world of gymnastics, yes. It was also a glimpse into the ugly under belly of the sport as well. The acts of underhanded aggression. Questionable coaching techniques. The injuries and extremes that the athletes go through to be the best. While reading this, I felt their exhaustion and elation. I felt their frustration, fear and sadness. Most importantly I felt Natalia’s determination to stand at the top of the podium and hear the national anthem and Spence’s pride in her accomplishments. And the steam between them didn’t hurt either.

I so enjoyed Natalia and Spencer’s love story! It was wonderfully written, a very fun and exciting read. Super sexy… Nat and Spence make the gym equipment look like so much naughty fun! Another great sports romance from Carrie Aarons. I’m excited to read the rest of the series. Well done, Carrie! 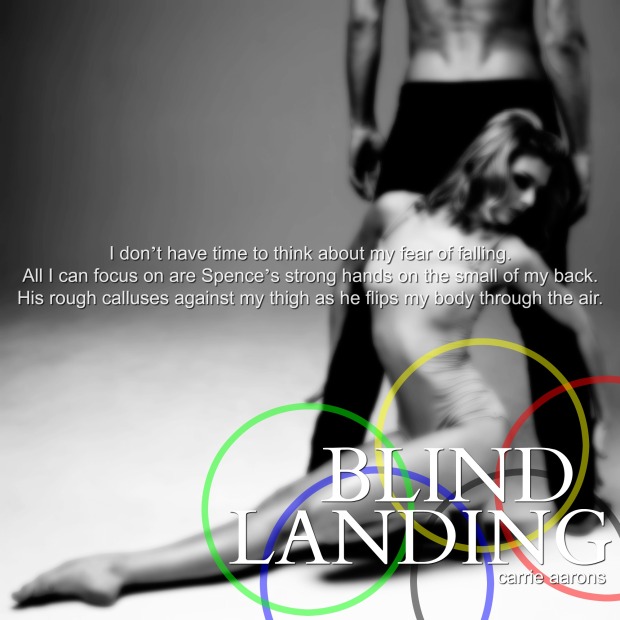 Fear stops dreams in their tracks before they even have a chance. Then again, so do injuries.

Natalia Grekov was born to win a gold medal. As the USA’s top gymnast, she’s calm, confident and ready to make her country proud in just two short months. And her elite athlete lifestyle includes no time for distractions—especially men. When a disastrous fall in practice puts her dreams at risk, it seems the only person who can help her is the one person she wants nothing from.

Spencer Russell is gymnastics’ bad boy. A cocky, laid-back charmer with abs of steel and a witty mouth, he waltzes around the U.S. Gymnastics Training Camp like he owns the place—even though he doesn’t anymore. After an injury sidelined his career and any chance at glory, he’s now just a coach, helping other gymnasts reach their goals. Serious is not a word in Spencer’s vocabulary. But when Natalia tumbles into his life, he’s suddenly sincerely interested in helping the blonde beauty in any way he can.

Can they vault over the obstacles standing in their way? Or will Spencer be the distraction that causes Natalia’s chance at gold to crash and burn?