The Deep End by Kristen Ashley

Sometimes in life and in love, you have to take a risk. Sprout wings. Fly to the unknown. Take a chance and see what happens. I live for writing that’s on the edge…something different…an adventure. I admire writers who soar out of their comfort zones, developing something different, something unlike anything they’ve written before but have to share with the world. Kristen Ashley took a chance, sprouted wings and soared into The Deep End that drips with decadence and desire, a book unlike anything this author has written before but a book that will blow you away!!!

A book that blasts me into the unknown, boosting me into unchartered territory where I wade in a sea of big waves, never knowing when one will crash into me is my BLISS. The Deep End by Kristen Ashley crashed into me like a big wave, desire drenching me, where I surrendered to this sea of bliss, never wanting a life raft but wanting to ride this adventure fast and furiously until the end. With writing different and decadent, The Deep End teeters towards the edge, a delicious drug that is the ULTIMATE ADDICTION. 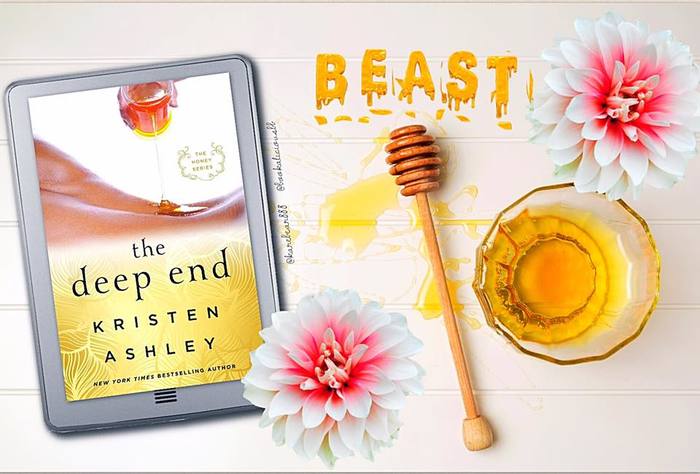 From the beginning, my curiosity was peeked. I felt like a voyeur as Kristen Ashley delved deeply into the delicious dominant and submissive world, one where I wanted to be a player too. I could not devour this book—this drug of words—fast enough. The Deep End was my adrenaline…my adventure…my ache…my ALL. Smooth like honey, this story stuck to me. I was ALL IN!!!

Kristen Ashley takes you on a tantalizing trip to The Honey Club where deepest desires come true, including yours. You will meet many partners of pleasure, many with women taking control as beautiful dominants with male submissives, but this book focuses on one fire-hot couple: Amelie and Olivier. In the outside world, Olivier is all alpha. Inside The Honey Club, he bows to the beautiful Mistress Amelie.

He was no Adonis. He was Zeus. He was colossal. A mighty beast. A magnificent beast.

A beauty taming a beast, but a beast who wields just as much, if not more, power.

Oh yes. There was a new beast to be tamed.

She drifted her hands down his neck and stroked his jaw.

It was not a question. It was a declaration.

The Deep End is a tantalizing trip into the delicious world of dominance and submission that will take you to the edge, pushing boundaries to the limit, where you fly and feel every tug of desire, unequivocally submitting to this story. YOU WILL SUBMIT, as this story will SEDUCE you fiercely and feverishly until you do. This book will push you to limits you never thought you wanted but must conquer. The Deep End is evocative and erotic yet tender and touching, a book that will burn your body and hijack your heart. The Deep End is unlike anything you’ve likely read before but a book where you will yearn for more.

I BURNED for this book as my body blazed like an inferno. My toes curled, my body burned, and I was likely blushing. This story seduced all of my senses. Pulsating, passionate, and powerful, The Deep End is PURE PLEASURE.

The Deep End was a risk I’m so glad Kristen Ashley wrote…one I’m so glad I took. I urge you to take the plunge, dive into this newest Kristen Ashley creation with and open mind. Let your fantasies run wild! Walk on the wild side and just submit to the pleasure of this smoldering and scintillating story. Take a dive off The Deep End. You’ll be glad you did.

This forbidden fantasy of fire meets ice still has me melting for more! So intoxicating and intense, The Deep End was MY FANTASY—my dirty little secret—where I smoldered and sparked to life. I went into this book blindly, and was rewarded with something so fresh and fire-hot! The Deep End took me to the deep end of desire, decadence, and dreams where I’m still free-falling off the edge, pleasure pounding me where I am not done fulfilling this fantasy yet. I’m still flying off The Deep End, and I’m not ready to tuck in my wings.

Enter a decadent sensual world where gorgeous alpha males are pleasure slaves committed to fulfilling a woman’s every desire. At the elite Honey club, no boundary will be left untested, and one’s darkest desires will become a sensual reality.

Olivier isn’t sure what he’s gotten himself into when he joins the Honey Club, only that a dark part of him craves the lifestyle offered by this secret, exclusive club.

When Amèlie invites Olivier to surrender, she pushes him to explore his deepest desires as a submissive. As they grow closer and find themselves falling harder than either of them anticipated, the truth about Olivier’s past could threaten the budding relationship they both long for.

Gripping and seductive, The Deep End is the first book in a sensational new series from bestselling author Kristen Ashley.

As he slowly closed the door behind him and moved his eyes to look through the room, taking it in, she watched them get wide.

They dropped to her and his amusement was clear. Not only radiating from his gaze but twitching his lips.

He thought this was funny.

She hoped like fuck she had the opportunity to prove him wrong.

She crossed her arms on her chest and slightly put out a foot, like she was about to start tapping her toe. In the wrap dress she wore, she knew this opened the overlap, not exposing anything, but the promise for him was impossible to resist.

His attention dropped to her legs.

“In the playrooms,” she began with a snap, and his gaze cut to hers, “I want eye contact. Unless otherwise instructed, you should not only feel free to look me directly in the eyes, if I’m in your line of sight or I’m not giving you something that your body’s natural reaction would make it difficult to meet my gaze, I require it.”

She stood there staring as he did nothing but dip his chin in acknowledgment.

“Unless I’ve asked for their silence or for them to ask for leave to speak, I also require my toys to respond when they’re spoken to. Even if it’s only a ‘yes, Mistress,’ or ‘no, Mistress.’”

His stance relaxed, like he was settling in at the beginning of a show he found vaguely intriguing, and his deep rumble of a voice bounced like boulders through the room. “Yes, Mistress.”

Christ, even his voice declared his challenge.

“Excellent,” she allowed. “Your name?”

Also unusual, at least in this country. And interesting.

She liked it a great deal.

He let her, holding her eyes.

“I know. You got a lotta fans out there…Mistress.”

The hesitation over him saying “Mistress” gave less of the impression he was testing her and more of the strange impression the word was unpracticed when, with any experienced sub, it would slip right off their tongue.

“There are things we should go over,” she remarked.

“Right,” he stated, his big body adjusting again, now like he was settling in further, intent on giving her the same attention he would a flight attendant who gave the safety address.

That being no more than a courtesy.

She fought the shiver his actions created but allowed the irritation.

“Your safe word is kitten,” she stated.

“You’re open to any kind of play,” she went on.

“It’s important and now’s the time to share should there be anything you wish me to shy away from, Olivier. Especially as this is the first time I’ve played with you.”

Something in his eyes flashed. Blue eyes that were the color of nothing and everything. Not sky. Not sea. Not midnight. A pure blue that only existed in the unchartable depths of a rainbow.

She felt that flash snake up between her thighs, taking residence in her womb.

He wanted this conversation done so she would play with him. He wanted the preliminaries over so they’d get to the good stuff.

She stared into those blue eyes and for a moment felt mesmerized.

For God’s sake, Leigh, she berated herself in an effort to pull it together. Rainbow?

“I’m open to anything,” he confirmed.

Kristen Ashley was born in Gary, Indiana, USA and nearly killed her mother and herself making it into the world, seeing as she had the umbilical cord wrapped around her neck (already attempting to accessorise and she hadn’t taken her first breath!). Her mother said they took Kristen away, put her Mom back in her room, her mother looked out the window, and Gary was on fire (Dr. King had been assassinated four days before). Kristen‘s Mom remembered thinking it was the end of the world. Quite the dramatic beginning.

Kristen grew up in Brownsburg, Indiana and has lived in Denver, Colorado and the West Country of England. Thus, she’s blessed to have friends and family around the globe. Her family was (is) loopy (to say the least) but loopy is good when you want to write. They all lived together on a very small farm in a small farm town in the heartland. She grew up with Glenn Miller, The Everly Brothers, REO Speedwagon and Whitesnake (and the wardrobes that matched).

Needless to say, growing up in a house full of music, clothes and love was a good way to grow up.

And as she keeps growing, it keeps getting better.