Throne of Truth by Pepper Winters

If two people are meant to be together, they will always find their way back.

Have you began and ended a story in tears? The first, last, and so much of the middle of the book render you a wreck, where the tissues are a lifeline, controlling those feels that flow like a river. Emotions are entangled so deeply where you feel EVERY. SINGLE. ONE.

I began and ended Throne of Truth in tears, my emotions on edge, entangled and engulfed in this story, where I felt every EVERYTHING. Throne of Truth by Pepper Winters hit my heart hard and sank itself into my soul. ALL THE FEELS flowed fast and furiously, where I was immediately bound to this devastatingly beautiful book, where I would likely remain.

I dove into Throne of Truth, barely surfacing for air. This book was the drug and I was the addict. I shut out the world while Throne of Truth became my world. Dark bled with light. Wrong bled with right. Throne of Truth BECAME ME. This story swiftly was my air…my ache…my anguish…my addiction…my ALL. I was quickly lost in Throne of Truth and did not want to be found…EVER. I already knew that this story was MY EVERYTHING. 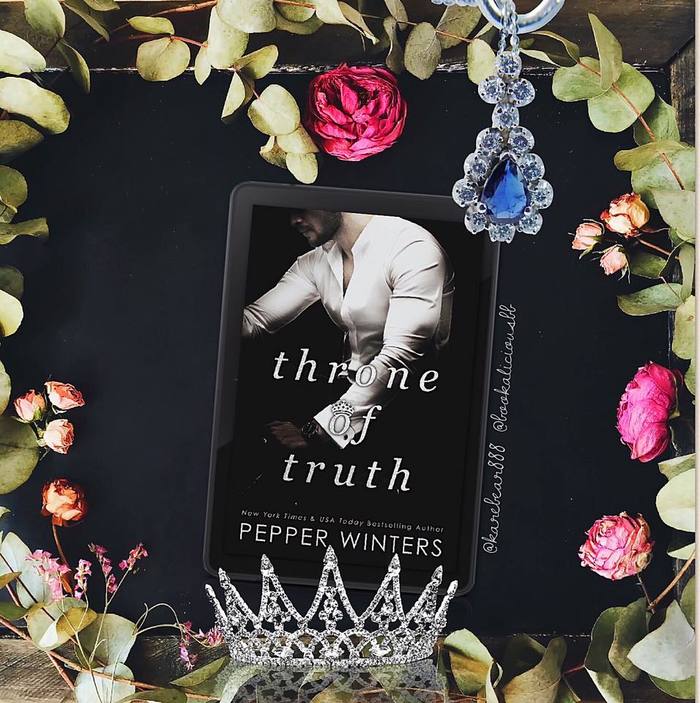 Beautiful blonde and blue-eyed Noelle ‘Elle’ Charlston has lived a fairy tale of a life with a caring father, powerful position as a young and wealthy CEO of her family’s retail company, and everything she’s ever wanted. She thought she found love but realized it was a lie. Now she doesn’t know who to trust. Who she though was a friend is now a foe. Now Elle must simply survive.

She gave me life, and she took my life.

Penn Everet is tall, dark, muscular, and handsome. Hero and villain. Angel and monster. Saint and sinner. Penn is a man of many layers and lies, but underneath the layers is a heart is gold, and oh did he hold onto my heart.

The truth shall set you free. Elle wants the truth and Penn is sick of the lies. Penn must reveal himself, as he has been a man of mystery, to Elle or she will flee forever.

“How can I tell you? How can I make you see what you don’t want to see?”

THIS DARK HERO WAS MY DRUG…and I could not drink the dominant and delicious Penn enough.

I was no longer a girl masquerading as a woman. I was all woman.

Elle was a girl in Crown of Lies but she’s a woman…a warrior…in Throne of Truth. She must protect those she loves along with herself. Like a butterfly, Elle has sprouted wings and is soaring high. So bold and brave, this confident and controlled woman is PURE POWER, and oh did I love this metamorphosis…this grown-up Elle.

Her passion and affection electrocuted my heart. She gave me the power to keep fighting.

Fight is what Elle must do…fight for her freedom…fight for Penn’s…just FIGHT like the warrior woman she’s become.

Penn and Elle are PURE PERFECTION together. The fusion of hot and cold perfectly blend into magic that melts like molten lava. You can’t help but feel their chemistry-clad connection, two powerful people powerless around each other perhaps brought together by fate.

He exploded as if he’d ultimately die if he didn’t have me that very moment. We kissed until we were breathless.

Penn and Elle’s kisses are molten lava that melted me from head to toe. Their chemistry is combustible, but their connection is EVERYTHING!!! This is not just lust but so much more! I felt their passion through the pages.

This saint and sinner made me SWOON, as I floated on Cloud Nine. This is a new side of Penn, one where is heart is no longer frozen but free.

“I’m giving you a way out, Elle. Say the word, and I’ll let you go. It will f**king kill me. You’ll rip my heart out…Leave me, Elle. Don’t let me get away with stealing yet more of you.”

Penn’s past erupts, exploding around him like fireworks. To protect Elle, he must set her free.

“Why are you doing this?”

“Because for the first time in my life, I need to do the right thing.”

Throne of Truth revealed itself, baring its soul to me, while stealing mine. This story stole my soul like a thief in the night, and all I could was submit to its power….its passion…its promise of more. INTENSE and INTOXICATING, I was indebted to every word…every page…every emotion that escaped, entangling around every part of me.

I felt every word I read in this pulse-pounding UNPUTDOWNABLE soul-searing story. I FELT EVERYTHING!!! This story struck my emotions like a match, setting them on fire where every feel was a burn. Throne of Truth took my tears, tears permanently etched in my eyes while reading. Throne of Truth nearly brought me to my knees where I WEPT from words that penetrated me with passion and power…heartbreak and hope.

Throne of Truth is deliciously dark, passionately poignant, and breathtakingly beautiful. Throne of Truth STOLE MY BREATH in a book that bled beauty and angst. I was ENRAPTURED by heart-wrenching and heartwarming tale.

I LOVED THIS STORY SOOOO HARD! Pepper Winters outdid herself again as I…gasp…loved Throne of Truth even more than Crown of Lies! Throne of Truth is easily one of my top February reads and 2017 best books too!

This book held my heart in its hands, where my heart bled and beat with every word. I’m still bleeding from Throne of Truth, a book that BROKE ME IN THE BEST WAY!!! Throne of Truth BLEW ME AWAY!!!

Throne of Truth is over but I am still basking in UTTER BOOK BLISS!!! My soul is sliced open and my heart is racing where I still feel Throne of Truth thrashing through me. My body, heart, and soul are still on fire…feels in flames…as this tale of truth has imprinted itself on me…perhaps forever.

Romance. It wasn’t paint-by-numbers or color within the lines. It was messy and scribbly and up to us to draw it how we wanted.

TWO YEARS
Since my life changed for the second time and not necessarily for the better. Two years since I traded prison bars for streets and hunted a runaway who I’d met in an alley.

TWO DAYS
Since I forgot how to lie, woke to fists, and chased after the girl who’d been stolen from me.

TWO HOURS
To save her, rescue her, keep my lies intact. She looks at me full of hate. I look at her full of confession.

TWO MINUTES
For our relationship to switch from mutual dislike to floundering with unknowns. I’ve hurt her. Now, she’s hurt me. I guess we’re even.

TWO SECONDS
For her to listen, to see, to finally know who I am. The answer comes with hardship. The answer isn’t what she wants to hear.

TWO BREATHS
For me to walk out the door.

TWO HEARTBEATS
For it all to be over.

Start the series with Crown of Lies!

Pepper is a Hybrid Author of both Traditional and Self-published work. Her Pure Corruption Series was released by Grand Central, Hachette.

Her books have garnered foreign interest and are currently being translated into numerous languages, including already released titles in Italian and Turkish. Audio Books for her entire back-list will be available in 2017.

Never miss an update! Sign up for Pepper’s newsletter today!