“The only enemy I can’t fight is the one I don’t know.”

“There is no fight if they never know you.”

I just finished Damage Control by Lisa Renee Jones and I’m still UTTERLY SPELLBOUND…SPINNING from the suspense where I’m still SPEECHLESS!!! I’m in a DREAMY DAZE. I can’t think straight. This story has not released my soul that is still swimming in a sea of suspense. My heart is still furiously beating out of my chest, racing like an Olympic runner. My body is going through the motions, directed by my brain that is still under the spell of this story. My mind is not mine. Damage Control rendered me MIND-BLOWN!!!

Damage Control claimed and consumed me from the very first page. Mind racing. Feelings flowing. Eyes wide in anticipation. Heart beating out of my chest. My pulse pounded with each page as I felt the current of Damage Control flow through me. I was HIGH ON Damage Control, my drug. I could not get enough of this FIX. 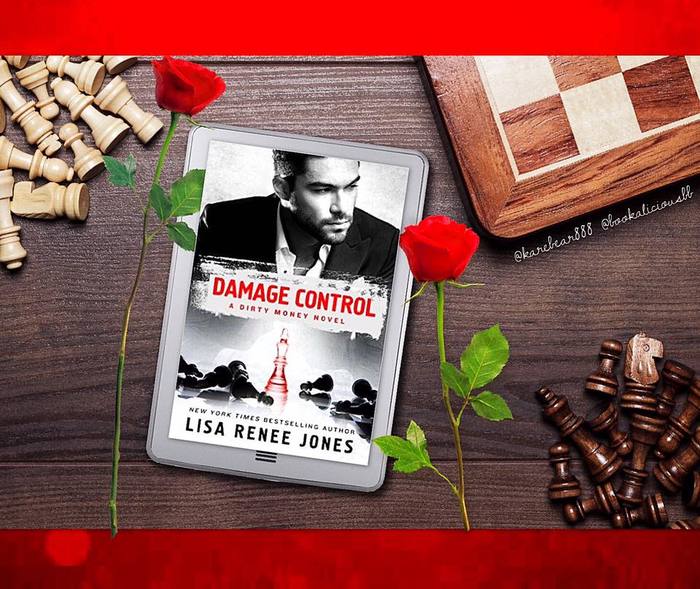 I was EXCITED and ON EDGE as Damage Control pushed me to the edge, transporting me to another world where I was held in suspense, left in a stupor. This story slowly seduced me, word by word, weaving me into its spell. Damage Control leapt to life so vividly, as if I were watching a movie my head. This story bled into me; I was bound to Damage Control.

Shane Brandon is the white knight in a dark world, battling his feuding family for control of their corrupt empire before they all crash and burn. So many demons lurk in the shadows: his father, his brother, the mafia that is tied to his brother, and more.

The one beautiful angel in his life, Emily Stevens, is not who she seems: Her life is built on lies. Shane seeks to uncover the truth while Emily wants to run from the man who’s her hero.

“Well, I’m going to be whether you like it or not.”

Running away won’t stop Shane from protecting Emily, as he will catch her to keep her safe…at all costs. Emily is the best thing that’s happened to Shane and he won’t let her go without a fight.

Emily wants to protect her hero as he’s protected her as both have demons ready to devour them. I loved her bravery as Emily is now Shane’s hero too!

“You’re a drug to me. The only addiction, outside of success, I’ve ever had.”

All alpha, I fell for Shane hard and fast. I LOVED THIS HERO!!! Shane is tough on the outside but tender at the core.

“But I own your pleasure.”

I SMOLDERED and SWOONED as Shane’s words of passion POSSESSED ME!!! I felt their chemistry COMBUST!!!

Emily is running from a past and hiding from the present that includes secrets that may destroy the one man she cares about: Shane. Shane is trying to save Emily, his family, and more. Lives are at stake as they may lay in the wake of mass destruction that may fall from deceit. Love may be the biggest victim in this crime. Shane is the conscience to his family’s corruption. Can he save Emily, them, and himself from destruction?

His demons and mine are alive and well, two poison kisses.

Damage Control is smolder, scandal, and sin that seduces the senses while wrapping you in a web of suspense full of twists and turns, and blazes and burns. This is not just a story but an immersion into another world. A world that holds you powerless in its clutches, daring you to escape. Escaping this enthralling tale that possesses power over the reader isn’t easy. Trust me…I know.

This brilliant and breathless book BLEW ME AWAY!!! I could not put the mesmerizing mystery meets romance down! This story was my drug. My high. My hope. My adventure. My addiction. Damage Control captivated and claimed ALL OF ME.

Shane Brandon has been pushed to the brink, torn between his corrupt family and his explosive, all-consuming desire for Emily Stevens, who he now knows is not who, and what, she seems. Has he trusted the wrong person? Will she, not his brother Derek, be the ultimate destruction of his family Empire.

Emily tries to run from Shane, but he will stop her, confront her, force her to reveal all – one hot touch and kiss, at a time, under every intimate detail of who this woman is, and what she wants, is exposed. But as he tears away the dangers of the unknowns with the woman in his bed, and in his heart, The Martina Cartel, has set their sights on his company, his family, and the one piece of leverage they believe he won’t gamble with: Emily.

“You make me remember I need to be good and right in my choices.”

“Do you ever question doing what is good and right?”

“There have been times when I felt like my hand was forced.”

“When you were a lawyer?”

“No,” I say. “I manipulated the law, as does every attorney, but I never broke it. I’m talking about when I’m with my family.”

“Did you go where they lead?”

“I know that,” I say. “But you just keep telling me so I don’t forget.” Her legs hit the bed frame and she grips my arms.

I lean into a kiss and she pulls back, her hand pressing on my chest. “Wait. Now it’s my turn to say talk to me. Are you okay?”

“Death happened. The one thing I can’t control. It’s not the night to push me to stop protecting you. Not tonight. Can you do that?”

“We,” I repeat, “and that word sounds as good on my tongue as I know you’re going to taste. I’m going to make love to you properly. The way I plan to many times in our future.” I reach down and untie her robe, letting it fall open; my fingers sliding underneath just far enough to tease her nipples. They pucker beneath my touch, and her lashes flutter, settling on her cheeks. “But when it’s over, I’m going to fuck you hard and fast again.”

I tug gently on her nipples and she bites her lips. “Look at me,” I order gently.

She opens her eyes, and there is desire in their depths, but there are shadows there too,. I do not think she intends for me to see doubt or uncertainty that wasn’t there before. That I do not like or wish to know ever again. I want it gone. Now. Tomorrow. Forever. I reach up and rip the silk tie from her robe, wrapping it around my hand, before I reach up and caress the robe off her shoulder, letting it tumble to the ground.

“Give me your hands,” I order, but it’s really a question: Does she still trust me?

She studies me for several beats, her eyes narrowing ever so slightly, and I do not know what she sees in mine, but she offers me her hands. I wrap the silk around her wrists then lean in close to her, my cheek against her cheek, my body touching her nowhere else. “Now you’re at my mercy.”

“How do you feel about that?”

My lips curve with the answer that is every bit the combination of sweet sexy honesty I’ve come to expect from her. “I’m going to make you warmer.”

I go still with that question, which on the surface is innocent, but I wonder if it truly is or if it’s about those shadows in her eyes. “I promise,” I say. “And you know, I never—”

“Make a promise you don’t keep.”

“Exactly,” I say, and her reference to my previous words tells me that I am not the only one on a mission of trust, and I intend to deserve hers.

I bring my hands to just above her shoulders, letting them lightly touch her before beginning a slow caress downward. She makes a soft little sound that has my cock thickening and my blood running hot, but I won’t rush this. My lips follow, tracing a line down one of her arms, then the other. I lean and caress my lips over hers, a feather light touch that teases me, if not her.

I take her hands in mine, pressing them behind her head. “Hold them there, for me, so I can see all of you. Understand?”

“You intend to tease me incessantly,” she says, without so much as a hint of hesitation. “Yes. I understand.”

I wrap my arm around her waist and pull her naked body against me, my free hand on hers above her head, our mouths a breath apart. “I intend to lick every part of you, and then do it again, so yes. If that’s the definition of incessant teasing, then yes. I am going to tease you incessantly.” I close my mouth down on hers, my tongue licking into her mouth, a deep, hungry tasting I force myself to end far too quickly. “That was the beginning. Should I could continue?”

New York Times and USA Today bestselling author Lisa Renee Jones is the author of the highly acclaimed INSIDE OUT series. Suzanne Todd on the INSIDE OUT series: Lisa has created a beautiful, complicated, and sensual world that is filled with intrigue and suspense. Sara’s character is strong, flawed, complex, and sexy – a modern girl we all can identify with.

In addition to the success of Lisa’s INSIDE OUT series, she has published many successful titles. The TALL, DARK AND DEADLY series and THE SECRET LIFE OF AMY BENSEN series, both spent several months on a combination of the New York Times and USA Today bestselling lists. Lisa is presently working on a dark, edgy new series, Dirty Money, for St. Martin’s Press.

Prior to publishing Lisa owned multi-state staffing agency that was recognized many times by The Austin Business Journal and also praised by the Dallas Women’s Magazine. In 1998 Lisa was listed as the #7 growing women owned business in Entrepreneur Magazine.

Lisa loves to hear from her readers. You can reach her at www.lisareneejones.com and she is active on Twitter and Facebook daily.