Crown of Lies by Pepper Winters

“If you want it, go for it. Take a risk. Don’t always play it safe or you’ll die wondering.”

I love to take risks…traveling to new places, trying new food, attempting new sports, living in different states and a country, and even reading books that push boundaries. The best feeling in the world is to get lost in a book where you’re transplanted, almost if by magic, to a new world. A world where you take flight to a new destination. I lived an adventure through Pepper Winters’ latest penned perfection: Crown of Lies. Crown of Lies is a thrilling, twisty, and turbulent tale of love laced with lies and hate that will steal your soul and render you breathless. 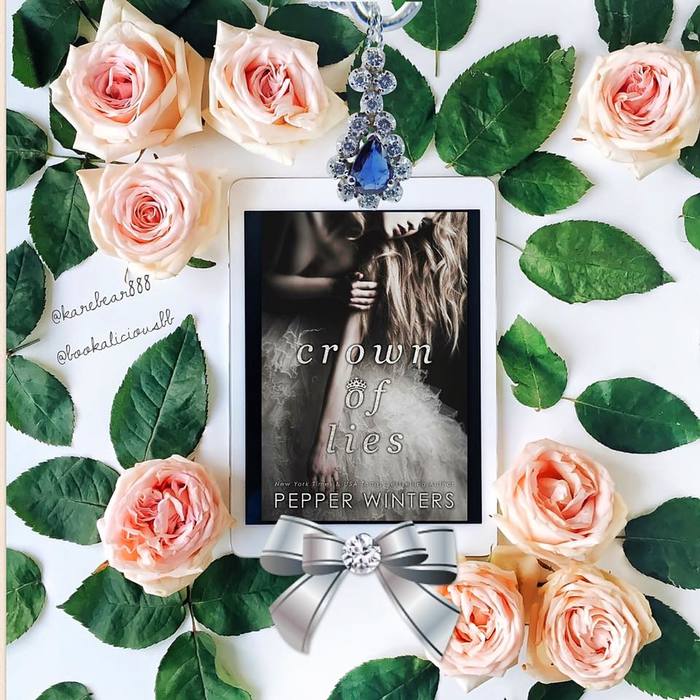 I dove into Crown of Lies, barely surfacing for a break, so drunk on this book while reading. I shut out the world while the light wrapped in dark world in Crown of Lies became my world. I was both a saint and a sinner as Crown of Lies BECAME ME. This story swiftly was my air…my ache…my anguish…my addiction…my ALL. I was quickly lost in Crown of Lies and did not want to be found…EVER. I already knew that this story was EVERYTHING.

Beautiful blonde and blue-eyed Noelle ‘Elle’ Charlston lived a fairy tale of a life with a caring father, powerful position as a young and wealthy CEO of her family’s retail company, and everything she’s ever wanted…everything except a man.

At just nineteen, a dark-eyed and dark-eyed stranger saves Elle’s life, a broken but beautiful man of no identity…nameless.

“Did he understand what he’d done by saving me? A life for a life. He’d saved me. And I haven’t saved him.”

“I’m not letting you go, I’ve only just found you.”

Tears dripped down my face, this story hit my heart like a hurricane, a storm of sorrow and swoon. Words of power…passion…and possession invaded every part of me. Crown of Lies gripped me hard, gutting me. I FELT EVERYTHING.

This man, ‘Nameless,’ even they only had one night, he invades Elle’s thoughts…her dreams…her life. She wanted to be his savior like he was hers but that chance was snuffed out in one night, one night that changed Elle’s life forever. A man of mystery who in one night became her world.

Until another man claimed her, a man she loathed but for whom she lusted: Penn Everest. Tall…dark…handsome…deadly.

“You sit here planning my future like you have control over me. What? You think you can make me fall in love with you? Get on my knees for you? Do whatever you tell me to, oh master? The flat-out disgusting nerve of you!”

“If you give me time, I’ll prove to you I can make you do all those things…and more.”

I loved how Elle is made of steel, this powerful CEO and one of the richest women in the world, won’t let anyone intimidate or control her…or so she thought. Penn Everest would not steal Elle’s soul as it was still searching for Nameless. Though Elle can’t deny the rush of heat that surges through her when Penn promises her pleasure.

That heat hit me hard. Oh did I feel the passion penetrate from the pages through me.

“The same rush of pleasure I wanted Nameless to take now begged for a new master.”

Elle could not help but succumb to Penn’s desires, powerless to a powerful man. She’d give him her body but he’d never steal her soul or have her heart; those belonged to Nameless…though Penn would try to take it all…everything.

“Oh, silly girl. The moment you said yes, all your choices became void. This is my game now.”

Oh Penn. So closed…cocky…crude…crass. I loathed him…I liked him. Hero and villain. Saint and sinner. Penn was a man of many layers. This man was a mystery I wanted to solve. I wanted more from him…needed more. THIS DARK HERO WAS MY DRUG…and I could not drink the dominant and delicious Penn enough.

“He kissed me and then he kissed me. Each swipe of his tongue blasted through my decorum, dragging alive the sexual being who’d never been allowed to evolve.”

Penn and Elle’s kisses were molten lava that melted me from head to toe. I could not get enough of their cat-and-mouse games combined with combustible chemistry that smoldered and seduced me.

“You don’t have a clue what you’re doing to me, don’t you? And I’m not going to tell you.”

Mr. Mystery is affected by Elle as she is by him though Penn won’t give her any truths. I wanted these truths too. I needed to unwrap Mr. Mystery and steal his secrets. THE SUSPENSE WAS KILLING ME!!!!

“Nameless had been the hero. Penn was the anti-Christ. One saving, one damning. I knew which one I preferred.”

Nameless…Penn…both thieves in the night…stealing a piece of Elle. One reminds Elle of the other…both sinners and saviors. Though Penn is who invades Elle’s body, thoughts, and dreams now.

Penn and Elle are PURE PERFECTION together. The fusion of hot and cold perfectly blend into magic that melts like molten lava. You cannot help but feel their chemistry-clad connection, two powerful people powerless around each other. These characters captivated me, and I wanted to shake the secrets out of Penn and force him to fess up to Elle as she deserves the truth. She has given this mystery man so much of her and needs more. I NEEDED MORE TOO.

“I couldn’t figure him out, and I desperately needed to if I was going to survive whatever he’d done to me. Because he had done something to me. He’d awakened me, and I could never go back to sleep.”

Crown of Lies awakened me with words that were my fire, flames that detonated me, demanding everything, daring me to catch fire too…and that I did. I burned for this book. I burned for these compassionate and complex characters with off-the-charts chemistry who were perfect together. I burned for more.

I felt every word I read in this pulse-pounding, UNPUTDOWNABLE, soul-searing story. Crown of Lies stole my breath in a book that bled beauty and angst, this book baring its soul to me and stealing my soul. The spellbinding, suspenseful, and spine-tingling Crown of Lies shook my soul, grabbed my gut, and hit my heart so hard that my emotions bled long after the story was over.

Crown of Lies is deliciously dark, passionately poignant, and mysteriously magical. Crown of Lies was MY RUSH. This story seduced my soul, so intense and intoxicating that I was indebted to every word…every page…every emotion that escaped, entangling around every part of me. Crown of Lies was MY CRACK! This story stole my soul like a thief in the night, and all I could do was submit to its power….its passion…its promise of more.

This book is over but I am still basking in UTTER BOOK BLISS. I’m still stuck in this soul-slashing story! My heart is still pounding out of my chest.

Pepper Winters outdid herself again! Just WOW!!! I LOVED THIS STORY SOOOO HARD! It may only be January, but I already know that Crown of Lies is a top January reads and a best book of 2017!

CROWN OF LIES OWNED EVERY PART OF ME. Crown of Lies is PURE GOLD! I want to wear this crown forever as I bask in the glow of a forever hangover!

“We’re all a little corrupt, doing our best to fit into a world that’s broken but still demands perfection…Thieves can become saints. Saints can become thieves.”

“I met the boy I wanted. But then he vanished and a new man claimed me instead. My father approved, my colleagues congratulated, and behind closed doors, I was bedded by a stranger.”

Noelle Charlston lived a fairy-tale life: a doting father, a powerful job, and a future blessed with financial security.

Noelle’s freedom was no longer hers. It belonged to the man her father believed was the perfect match. The man who pulled his lies over everyone he touched.
Including her.

Seduced and manipulated, Noelle lives two lives. The one everyone sees on the outside and the one no one sees on the inside. The lies he spins, the truth he hides, the mystery he webs—it’s all enough to slowly erode the woman she’d been and turn her into something else.

Until her past collides with her present.
And it’s her turn to lie.
To everyone…including herself.