Taking Care of the Target by Cindi Madsen

If you are not willing to risk it all, then you don’t want it bad enough.

Every time I meet a new-to-me or new author’s book, it’s a high, a dive into unknown territory. Trying something new is a risk but reward, a challenge and adventure. The utter pleasure I get when I meet a new or new-to-me author’s words is BOOKWORM BLISS! That rush during that initial read is off-the-charts incredible! I met my first book by Cindi Madsen and it was a doubly-delicious high: new-to-me author plus romance thriller. Taking Care of the Target is a pulse-pounding, heart-hitting, rush of a romance that dangles you on the edge, and leaves you aching for more. 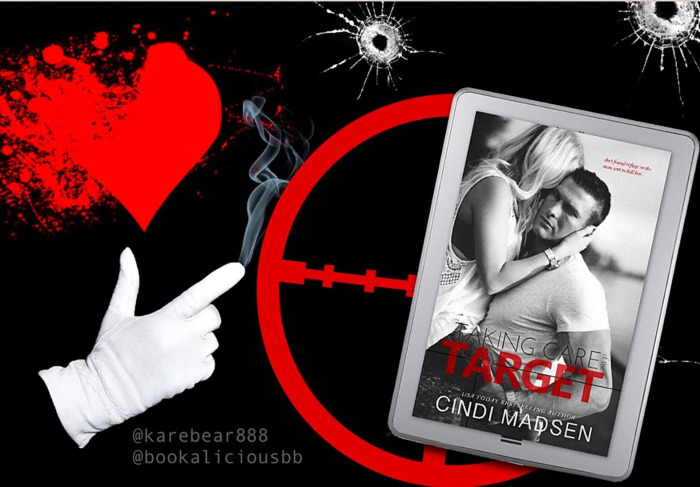 Taking Care of the Target began as a slow burn that built into a raging inferno of excitement where I could not turn the pages fast enough. Energy flowing through me like electricity where I could not help but be engaged. The powerful and perilous plot combined with lots of dialogue needed for a third-person point-of-view story along compelling characters kept me highly tuned and trembling with excitement.

This mafia romance gripped me hard, holding me in its clutches, where I was captivated until the end. Mind racing. Bated breathing. Heart beating out of my chest. Pulse pounding with each page. Taking Care of the Target was the adrenaline that made me feel ALIVE. I chased this high from start to finish; I WAS ALL IN!

Beautiful Cassie Dalton with her blonde hair, green eyes, fair skin, pink glasses, and curves in the right places rocks the girl next door-hot librarian look well. A waitress and student, this sweet gal has had the life of hell with a painful past. Starting over in a new city with no friends is never easy. Starting over in a new city where she possibly works for the mafia is not easy at all, especially when one of the members is so hot it makes her combustible. Starting over is even harder when Cassie witnesses a hit she shouldn’t have, then is hit by a car, and is suddenly a wanted woman with the mafia…a rough start to a new life indeed.

Tall, dark, and handsome with muscles and ink, Vince DaMarco, runs a restaurant though owned by his mob boss uncle. Vince doesn’t want any part of the family business and tries to walk the straight and narrow, focusing on the restaurant, instead of the behind-the-scenes criminal activity. Now his uncle wants to initiate him into his mob family with taking a hit on the beautiful waitress who he can’t help but like and want.

“Of all people, why did it have to be Cassie?”

Cassie doesn’t remember the handsome stranger who is suddenly in her life, the man who was a part of the mob but still a good guy. Vince doesn’t want to take a hit on the sweet girl who has been the star of his hot librarian fantasies a few times, and can’t help but like what he sees…inside and out.

“I can be very persistent. I play dirty, too.”

Vince is all male and his dirty words made me smolder from head to toe. I LOVED this amazing alpha from the start! He may be the adventure that Cassie needs but first she will have to break through the barriers of his heart.

“Hopefully he’ll eventually realize he can let me all the way in.”

Lines are crossed and neither expected an inferno of an attraction to be so blinding.

“I’ve always tried to keep people as a distance, but you broke through, and now I’m a mess.”

Cassie may be the first person to see the real man with a kind heart, the man who is holding her heart, underneath the tough guy exterior.

“Just so you know, Vince DaMarco, I see you. The real you. Even if you don’t.”

Vince is used to control in all things. Never has a woman made him want to lose control until Cassie. Vince wants to protect Cassie though he is supposed to end her.

“I wanted to protect you, but I also just…wanted you.”

Cassie is falling for Vince, the gorgeous man who protects her with his life. She sees the heart of gold beating in her knight-in-shining armor.

“Like it or not, you’re a good guy, Vince DaMarco.”

What started as a mere and mutual crush now is a hit to the heart, but with a mafia hit out on Cassie that Vince is supposed to deliver or else risk his life and hers, life is a hot mess and someone is going to go down in the end. How can you kill the one with whom you are falling hard?

“I wish I could forget about everything else and start over with you.”

Taking Care of the Target is a moving mafia romance that is achingly addictive, deliciously dangerous and sugary sweet. A fusion of hope, heartbreak, and happiness swirled around in my head like a hurricane, waiting to hit where they would flood…all over this book…all over me. Taking Care of the Target was a beginning-to-end high, and I loved every toe-curling minute!

This forbidden and furious rush of a romance electrified and entranced me. Taking Care of the Target danced with danger and hypnotized with heart. Go target this romance now!

Vince DaMarco always liked Cassie, the shy waitress who works at the restaurant that serves as a front for his mob boss uncle. Unfortunately, she witnesses a back alley hit, and while fleeing, she’s struck by a truck. Now she’s at the top of the hit list. Desperate to stop anyone who’d draw out Cassie’s death, Vince volunteers to take care of it.

Cassie Dalton has no recollection of her accident, but she’s told she’s lucky to be alive. A few years are missing from her memory, and the unsettling feeling that something isn’t right—along with the creepy sensation that she’s being watched—won’t go away.

Vince shows up right when Cassie needs him most. In a world of confusion, the rugged stranger is the one thing that makes sense. But little does she know, she’s found refuge in the arms of the very man who’s been sent to kill her.

USA Today Bestselling author Cindi Madsen sits at her computer every chance she gets, plotting, revising, and falling in love with her characters. Sometimes it makes her a crazy person. Without it, she’d be even crazier. She has way too many shoes but can always find a reason to buy a new pretty pair, especially if they’re sparkly, colorful, or super tall. She loves music, dancing, and wishes summer lasted all year long. She lives in Colorado (where summer is most definitely NOT all year long) with her husband and three children.

Visit her at www.cindimadsen.com, where you can sign up for her newsletter and learn about upcoming releases.

Cindi is the author of YA books All the Broken Pieces, Cipher, Rift, Resolution, and Demons of the Sun, and adult romances Falling for Her Fiancé, Act Like You Love Me, Resisting the Hero, Cinderella Screwed Me Over and Ready to Wed.