Down Shift by K. Bromberg

“We were two broken souls in love and maybe our crooked pieces were what made us fit together so perfectly, just like a puzzle…The puzzle I didn’t know I needed, and the puzzle he didn’t know he wanted.” ~Unknown

Have you ever begun and ended a story with tears? The first, last, and so much of the middle of the book render you a wreck, where the tissues are a lifeline, controlling those feels that flow like a river. Those emotions are entangled so deeply where you feel EVERY. SINGLE. ONE. Down Shift by K. Bromberg hit my heart hard and sank itself into my soul where all the feels flowed fast and furiously, leaving me bound to this devastatingly beautiful book where I may remain forever.

Oh did I want to jump! I wanted to devour Down Shift. I wanted to savor it, Zander, and Getty. I wanted to rush. I wanted to take my time. Down Shift stormed its way into my heart and soul, a bolt of lightning, striking me hard and hastily. Feelings flowing. Pulse pounding. Soul spinning.

I WAS ALL IN. Happy tears. Nostalgic tears. Weary tears. Sad tears. So many tears. I knew Zander’s story would be one of heartbreak, and perhaps hope and healing. However, Getty’s story dealt me a few emotional blows where I broke just as hard. So many emotions cut through me like a knife.

The Prologue dragged me into Down Shift. Before I could catch my breath, I was thrust into this story. Utterly immersed. Emotions engaged. Air amplified. It took but a few words to become one with this touching tale. One line…two lines…three and my emotions were standing at attention, preparing to fight the ensuing flood of feels…a losing battle.

“The stain on my soul darker than ever before.”

After just one paragraph, Zander embedded himself in my heart. The Prologue spun me around, my head in disbelief, my heart heavy and hurting for Zander…for Colton…for Rylee. I was brought back into the Driven world—with just a few words—as if I never left. I saw a newer and even better Colton as a father who melted me to pieces. This Colton is wiser and more mature but still passionate and persuasive. Oh Down Shift, I gasped for air as this story stole my breath and took my tears.

“Everything important taken away from me with the slam of the door: my family, my ride, my anchors. And the sting is real.”

The sting was real indeed. Zander Donavan, Colton and Rylee’s son, has never dealt with his painful past. Now, the past floats around him like a ghost, returning again, haunting him, wrecking his racing, and leaving his life in ruins. He has no choice except to fight the demons head on, a battle that needs to be fought solo. Self-healing.

Oh does Zander have to take that jump. Rebuild his life. Rebuild himself. Leaving his LA life and spot as the top racer behind, Zander relocates to a friend’s house on the Washington coast to work those demons out of his system, eliminate those complications and purge that painful past.

“I can’t chase the ghosts away for good if I don’t face them head-on.”

My heart that has held Colton for so long now holds Zander. Cocky and complicated, wounds rush through him that are years old, causing Zander to wound others in his path. I wanted to hug him and help him soothe the pain.

The gorgeous dark-haired, blue-eyed, tall, and muscular Zander didn’t expect to meet the beautiful brown-haired, brown-eyed, long-legged, and curvy Getty Castor. Getty is running from demons too after being controlled like a puppet all her life. She leaves home for a fresh start, a new life, one where she will be confident and commanding.

“That unmistakable zap of chemistry. My neurons catching fire…for a split second I think he feels it too.” 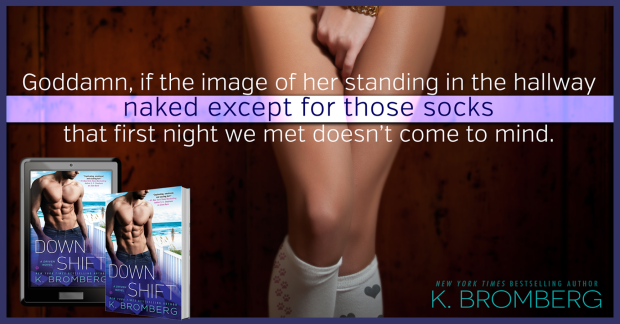 Zander and Getty are electric. Their chemistry is a current that flows fast and furiously through them, perhaps carved by fate. Despite the deep desire and attraction, they are complications to each other. Zander does not need Getty mixing up his mind further when he needs to fix his failures while Getty is done with men after they have let her down all of her life.

“Words. Thoughts. Confessions. The look in his eyes and the comfort of his touch cause my head to whirl, make me want to let him in.”

Both Getty and Zander have messed up, made mistakes in the past. Zander is supposed to be finding himself but Getty is who he has found and who is softening his hardened heart.

“You complicate things, Getty. Because there is something about you that continually reminds me why I came here.”

Zander and Getty succumb to the temptation of touch, waging a war on those fireworks that ignite whenever they touch, heating them from skin to soul.

This story…oh does Down Shift matter. Tears that tried to tangle with me during the first half of the story won the war, trickling down my cheeks like drops of the ocean.

“Right now every damn part of me wants to kiss you again. Kiss you till we can’t breathe, then lay you down on my bed and show you what it’s like to feel that kind of worship…But I can’t do that to you. I can’t knowingly walk you into my storm without showing you where the lighthouse is so you have a way out before you even begin.”

I FELL IN LOVE fast and furiously with Zander, Getty, and Down Shift. My heart bled for these broken souls who should heal and be happy together as one.

“It’s like I’m trying to come up for air and he’s trying to pass me his.”

I swooned so hard from these beautiful words that seduced my soul, carving a piece of my heart out with every word…every paragraph…every page.

Zander and Getty need a relationship jump. Their chemistry is off-charts-hot but their compassion is just as combustible. Getty and Zander care so much for each other but won’t take that lap around the relationship track. It’s too bad that they still think of each other as a complication, something they don’t want or need.

“I snarl and clench my jaw, because the last thing I need is her presence here to cloud my thoughts. Give me reasons to want to stay. Make me want to walk up to her, back her against the counter, and kiss her senseless. Which is exactly why I’m leaving. Right now. Distance. Space. Clarity.”

Love may be washed up on the shore before it’s even ridden the waves as the past collides with the present. Darkness dangles itself in the air, threatening to steal the light. Zander must find himself without losing Getty. He’s the puzzle she didn’t know she needed, and the puzzle he didn’t know he wanted. Two broken hearts must find a way to fit together.

“Everyone’s churning ocean is fueled by a different type of storm.”

Down Shift was my perfect storm, an electric current that lit me up like a lightning bolt, sparked with sensations, where a force of feels flowed through me. Dark yet light. Turbulent yet tender. Broken yet beautiful. Explosive, exhilarating, and enchanting, Down Shift is EVERYTHING. This shattered and stunning epic love story is the perfect complement to the Driven series. Those beautiful and broken words broke me where I was drowning to breathe as Down Shift stole every piece of me: mind…body…heart…soul.

Oh did my heart jump as I was free-falling into Down Shift, riding the waves of emotions that crashed into my soul, where I felt every word I read. Down Shift was ALL OF THE FEELS. ALL OF THE SENSATIONS. ALL OF THE SOUL. Oh did this story hit my heart hard. Bate my breath where I held it for periods in anticipation. Pounded my pulse as adrenaline rushed through me. Mesmerized my mind that fell hostage to this latest Driven book from the very first page. Stole my soul that was tied to this story like a race car to a track.

Like Colton and Zanders’ cars around the track, my heart is still racing for Down Shift. What started with Driven, a series that stole my heart years ago and still holds it closely today, has ended with Down Shift, a shift in gears. I’m not quite ready to shift gears. Down Shift and the Driven series are not just stories; they are beauty in words…adventures that feel so very real. The forever kind of real. The voodoo vortex kind of real. The real that I raced over two years ago, race today, and will still race tomorrow from A to mother f**king Z.

Behind the wheel, racing champion Zander Donavan is at the top of his game. But after too much excess in his personal life, he’s forced to step away. He needs to accomplish something all on his own—outside of his famous father’s shadow.

Getty Caster is running away from the abuse that clouds her past. She thinks she’s found the perfect escape—until she discovers a stranger in the beachside cottage she’d been promised. He’s undeniably sexy, but she’s there to heal. Alone.

Before long though, fighting with each other turns into fighting their attraction. And giving into desire sets off a chain reaction that has their pasts colliding. With an unexpected love on the line, can they overcome the fallout to build a future?