Can’t Touch This by Tess Hunter

“Sometimes love happens when you least expect. You can’t prepare for it, you can’t be ready. It just happens.” ~Unknown

Love lands on you when you least expect it; you’re not prepared for your life to be altered or your path to change its destination. Sometimes stories cross your path and give you great pleasure when you aren’t expecting them where their releases may be ones of surprise. These stories start as surprises but buried beneath the writing they become the best books and unexpected pieces of pleasure.

Pepper Winters, writing as Tess Hunter, surprises the book world with a bang in the form of Can’t Touch This, soaring in her rom-com debut with a heated, humorous, and heartwarming story of unexpected love. A story that scorched me from head to toe. A story that made my soul soar and my heart happy. A story that stole every part of me.

The inside cover page already had me giggling with the caveat that is not Pepper Winters but so Pepper at the same time.

“Don’t worry. It’s the same person doing strange things as all authors are prone to do. Just sit back and hopefully enjoy…”

When this book landed in my lap as a sensational surprise, I dropped everything to devour Can’t Touch This because Pepper Winters’ writing always speaks to my soul, making it soar to destinations unknown. Written on a whim as medicine to soothe the soul after a great loss, I felt Tess Hunters’ emotions escape from Can’t Touch This to me: angst to awe and humor to heart.

The cover for Can’t Touch this had me drooling where I knew instantly that this book would be different and daring, a unique and out-of-the-box story for one of my favorite authors. Oh did the cover make me want to touch this…a lot. I knew the heat and humor would pour off the pages…and oh did it steam up my kindle and make me light up in laughter. What I didn’t expect is how Can’t Touch This would touch my heart.

Oh did the blurb make me want to touch Can’t Touch This even harder with the first few lines that zapped electricity from the pages to other places.

“I don’t’ really want to touch it. I really, really don’t. He’s egotistical, crass, and my patient’s owner – which makes him totally off limits.”

Hook. Line. Sinker. I was already caught before I read the story, which I already knew would be incredible. Spoiler Alert: Can’t Touch This is so intoxicating and so incredible.

Can’t Touch This took me in its clutches from the very first page, capturing me, claiming me; I was ALL IN. Where Pepper Winters’ other books are drenched in darkness, this one by her other alias, Tess Hunter, is bathed in brightness. I did not have to pause while reading to reign in my emotions left dangling in the darkness like in this authors’ other stories. I devoured Can’t Touch This like a hungry lioness, ready to pounce on the pages like my next meal or the air I needed to breathe.

Vesper ‘Ves’ Fairfax is a beautiful blonde, blue-eyed, and long-legged veterinarian who dedicates her life to her four-legged friends and her human bestie, Polly, leaving no time for the male two-legged species. No time except for the one who keeps bringing a parade of injured dogs to her vet, harassing her, and looking at her like he wants her for dinner.

“Her blonde curls, slightly upturned nose, and damn pixie features meant my cock wanted to visit just as much as doing the right thing by the dogs I cared for.”

Ryan Carson with his hazel eyes, dark tousled hair, and tall and muscular body was sex-on-a-stick. An Adonis who happens to love animals, especially the two-legged vet that he and his rescue dogs must see.

Not even 10 percent into this story, the humor and heat had me eating up the pages.

“I didn’t mean I wouldn’t touch him. Just not that hot dog in your pants that you keep referring to.”

“Hot dog? I’d say it’s more like a giant salami…You can squeeze my salami if you want.”

I’m pooling in a mixture of laughter and lust, still in disbelief that the Queen of Darkness is now the Queen of Comedy. I FELL IN LOVE FAST AND FURIOUSLY after just a few pages.

While Ryan is heated and humorous, the vet has a hot and hilarious streak too where I laughed just as hard.

“He cupped the delicate meat and veg between his legs. It wasn’t just snack size, either. It was banquet – need to go back for seconds and possibly thirds – size. Damn him. Damn his sexy face and alluring cock.”

I may or may not had to fan myself off a few times from these steamy lines that lit me up like a fire scorching below. Oh how has this dirty-talking delight of a man with a heart of gold worn out the beautiful vet, enticing her with thoughts of his salacious salami so she’ll bite and go on a date.

“I liked him. And there was no room in my colour-coded diary for a dirty talker, pooch lover, and gorgeously handsome man. Even if I did want to touch it.”

Ves doesn’t want to like the infuriating man who turns her on at work, but she can’t help what her traitorous body feels. Her brain also can’t help but process every dirty word and look that makes her want to pounce on Ryan like a cat in heat. Temptation never looked so good.

“This wasn’t just a first kiss. This was something explosive. This was dangerous, and it brought things out of me I didn’t know existed.”

The chemistry between this captivating couple – between these pages – ignited like wildfire, burning from the pages to me.

Oh how my sweat turned into SWOON. I SWOONED HARD over this unexpected story. I swooned over this unexpected couple. Can’t Touch This didn’t just smoke the story and me with heat; it hit my heart with a bigger impact than I imagined. One laced in lust where love threatened to seep through, one sweet surprise that I didn’t see coming.

“We were both breathless as we slowly returned from heaven, floating back to earth. We stared into each other’s eyes and there was so much to say, so much to ask.”

Sex with no strings is easy…uncomplicated. What happens when those strings start to entangle the hearts, throwing emotions into the mix to make a sudden mess?

“This game we were playing had suddenly become endlessly dangerous.”

I FELL IN LOVE with Can’t Touch This, fast and furiously. Sweet and spicy, witty and wonderful, I LOVED this story so much! Can’t Touch This touched every part of me as this unexpected romance blazed my body, lit me up in laughter, and hitched itself to my heart in a story that made my soul soar. Explosive and entertaining like fireworks, and emotionally-intertwined like first love, Can’t Touch Left this left me aching for more.

Pepper Winters as Tess Hunter dropped a bomb of book bliss – a detonation I did not see coming – with her debut, a spellbinding story that rules the romantic comedy genre LIKE A BOSS. The Queen of Darkness is now also The Queen of Comedy and The Queen of Involuntary Thigh Clenches because WOW. Just WOW! I am indebted to Peppers’ light books as I am the dark, the entertaining as well as the emotional, and all that touch me – whether tenderly or tenaciously, hard or soft, happy or sad. Whether writing as Pepper Winters or Tess Hunter, I’m indebted to this authors’ treasured stories for life as they all make my soul soar and heart happy.

I don’t want to touch it.
I really, really don’t.
He’s egotistical, crass, and my patient’s owner–which makes him totally off limits.
Yep, that’s right. He owns the wiener I’m currently working on.
A wiener dog–get your dirty mind out of the gutter.
I’ve also worked on his Spoodle, his Cocker-shitzu, and a Cheagle–don’t ask. (And no, it’s not a sexual position).
It doesn’t help that he also represents most of my joint-owned veterinary practice’s small clientele. We’d only just opened the doors a few months ago, and in he strode with a yelping Taco Terrier. One haughty look at our sparkling new facilities, he’d demanded royal treatment, even though I was currently finger deep up a squalling tom cat.
Ever since then, he expects me to serve him.
Any time. All the time.
Him and his revolving zoo of dogs.
One of these days, I’m going to swat him for being such a pompous ass but I can’t deny the way he handles his charges makes me want to see past the ‘do as I say and don’t ask questions’ barking exterior.
But then last week…he caught me staring at his um, cough, package.
His bossy commands switched to a cocky smirk.
He gave me permission to do something I promised myself I would never ever do.
I can touch it.
If I want… 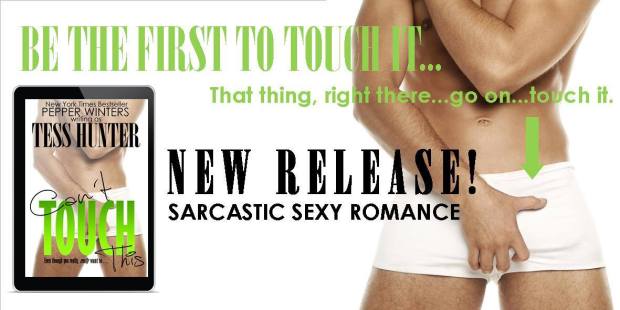