I am such a fan of LK Collins. Her work is stunning. Her words bring her worlds to life. In the time that I have read her works, she has touched on some topics. PTSD, drug abuse, suicide… the death of a loved one. I was sure that The Arrogant Architect would be one of her steamy sexy tales. But this story… King and Ever? This was crazy love, an instant hate, heartbreaking loss, a struggle to move on… a struggle to understand.

Ever has had a tough six years after losing her beloved mother. Nothing has been the same for her and her father. The loss has been staggering and she has no clear plan to let her mother go. Her work as a chef has been her salvation. Her apartment has been her sanctuary. All of that is thrown into disarray by one brilliant, beautiful man – Kingsley Lennox. Instant hate for Ever. Instant attraction and need for King.

King is an architectual genius. Highly sought after. Richly awarded. A pioneer in his field. But no matter how hard he tries and how many other people adore him, the one person who he wants doesn’t want to be anywhere near him. With dogged determination, he pursues Ever. He won’t stop until her wins her over. One date. That’s all. He doesn’t have time for love but he has time for ONE DATE.

Their interactions put me on edge. Ever hates him, refuses to give him a chance – to the point that I found her and her actions mean and petty. Kingsley moved and moved faster and faster. Trying everything, everything. Until it happens. Ever gives in and then nothing between the couple is the same. Their relationship swings up and down… just as their lives swing up and down. The angst continues to build. The feeling that something just isn’t right. Just when it seems too much for Ever to understand and to accept, the answer is there.

This amazing story won’t let me go. Even after having finished their love story a few days ago, Kingsley won’t leave my thoughts. Everly won’t slip away so easily. I laughed at their antics. I cried for their losses. I cried for man needing to come to grips with his needs and his limitations. I grieved for a young woman who just wanted one more minute with her mother. I celebrated with them as they worked their way toward a happily ever after – or at least for right now. 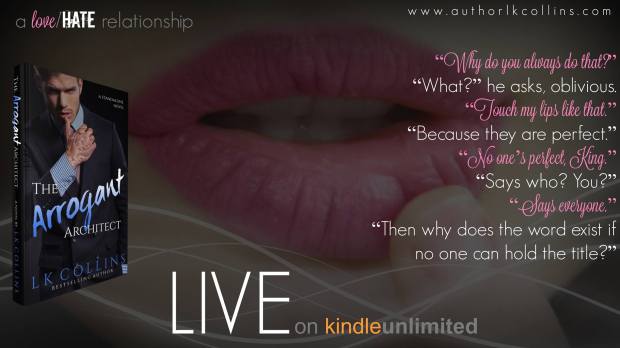 Kingsley Lennox, AKA King, has been dubbed a genius of the architectural world. Anything he touches turns to gold, and being as successful as he is, his work is his number one priority. He doesn’t have time to date or deal with the slew of women that gawk at him just because of his perfect face and chiseled body. Plus, no one has interested him enough to give a shit, until the smart mouthed Everly Adams, AKA Ever, wakes to the noise of him restoring the building next door to hers.

Ever, like King, doesn’t have the time or the desire to date, she’s been through so much. So when she meets King, she can’t help but want nothing at all to do with the arrogant asshole. For one, they share nothing in common. For another, he’s pompous, cocky, and throws his money around as if that will win her heart. Did I mention he’s fucking crazy and very controlling? No, thank you!

But when King sets his mind to something, he accomplishes it…always has, always will. Ever is the biggest challenge he’s faced, but will she be the only person he can’t impress?

Can King win her over, all while hiding the truth about who he really is?