What a fun read, such a wild ride of twists and turns that I never wanted to end! Michelle outdid herself when she wrote Strange Magic and completely surpassed my expectations with Dream Magic! This story had me turning page after page until I was finished!

Beautiful, Courage, Strength, Love, Loyalty. All words that describe the heroine in Dream Magic. She loves fiercely and would do anything to protect those she loves. Cecelia (CiCi) has been dealt a tough had by fate. She has become the prisoner of a cruel man who forces her to Prophesy, draining her energy from her. She has come to terms with her fate. No one will be able to rescue her. She’ll never be free again. She’ll never find love.

Morpheus, we all know and love, from Strange Magic is our hero in this book. He’s still a sexy as hell Falcon, and the fastest supernatural alive! He sets out on a journey to recover something that was taken. The only way they can find it, is with the Oracle’s help. Morpheus gets the shock of his life when he realizes…..

….he and CiCi are Fated!

With CiCi being a prisoner, what will happen?

In Dream Magic, you are reunited with the characters that we fell in love with in Strange Magic. Thyme, Billy, Arla, and Shane!

Michelle Mankin did a phenomenal job with her world building. I was all consumed with this book, the unique story line, and the characters. I fell in love all over again with the previous characters and fell just as hard for the new characters I was introduced to (CiCi, Amelia, Fiori, Stone). Dream Magic had me on the edge of my seat the entire time. I had to know what was going to happen next! I didn’t put it down until I was finished! I was left with my mouth hanging open and a wtf expression on my face I’m sure cause……I DID NOT see that coming! I need the next book like, now!

Michelle as a beautiful talent for writing unique stories with romance, and twists and turns that will leave you breathless and begging for more! I can’t wait to see what stories she dreams up next for her readers! I can’t wait!

The dreamscape is a place of magic and mystery and meaning. In that nocturnal realm, ideas, images, sensations and emotions drift on the currents of the unconscious mind.
Morpheus the Dream Falcon is most at home in that domain. By night, the one of a kind winged immortal soars on those winds, observing and sometimes even entering the slumbering thoughts of another. By day, he is a highly sought after mercenary feared by his immortal kin for both his unmatched ferocity and his wicked obsidian talons. None of his prey escapes him.
Cecilia Ramirez y Aguilera is the one he truly wants. But the striking oracle of the Court of the Light Immortals is closed to the handsome outlaw, even in her dreams. Broken by unimaginable losses, the seer is but a slave, subject to the whims of a master who is mad and without mercy.
Drawn together by fate, their impossible passion ignites. But will that be enough given the dangerous secrets each keeps from the other? Or will mistrust and the desire for revenge threaten to unravel the powerful magic that binds them? 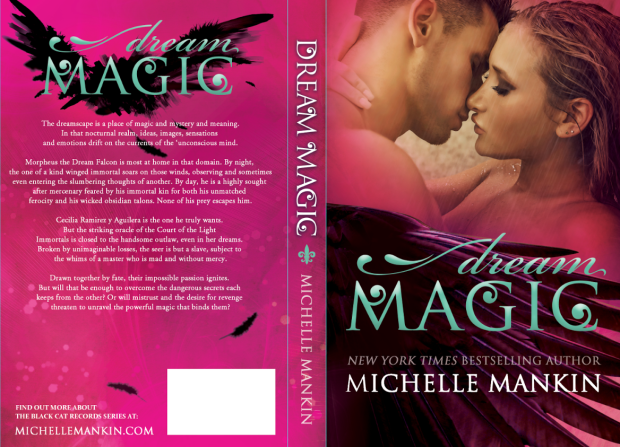 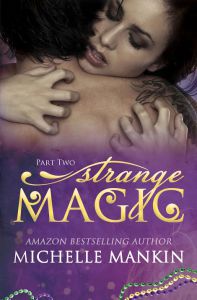 Romance. Action. Angst. Strange Magic had it all, and more! I loved this book! As soon as I began reading it, I was completely immersed in the story line. Michelle Mankin is phenomenal author. Her words made me feel as if I were there with the characters. It was like I was watching a wonderful movie that I didn’t want to end!

Thyme Bellrose is a beautiful young woman, raised by her grandmother most of her life. She lived a quiet life working in their ice cream shop, helping out neighbors, and dating the love of her life. She was just a normal girl

….or so she thought.

Billy Blade is a sexy famous musician. He lives his days playing music, drowning his sorrows in a bottle of whisky and having random girls warm his bed at night. He has a supernatural gift that scares him and he doesn’t think anyone will believe him.

Both Thyme and Billy are tortured souls for very different reasons.

When they finally meet, it’s beyond obvious that they are meant for each other.

This story was packed with so much action, romance, and twists and turns that I couldn’t put it down. It was a phenomenal read and I can’t wait to see what Michelle Mankin will deliver next!

Billy Blade is a hardworking, hard living, razor sharp musical force. Mysterious behind his dark shades, the rough around the edges Texan mesmerizes with his haunting harmonica and tantalizes with his dangerous looks and smooth country charm. His latest album is topping the charts. He’s the newly crowned King of the Bacchus Krewe. He’s definitely living the rock star dream.
Exotic Creole beauty Thyme Bellerose couldn’t be more content. She has it all. An adoring grandmother. A handsome Tulane medical student beau. A satisfying job in the heart of New Orleans’ French Quarter. Her life is as rich as the ice cream she creates. She’s got everything under control.
But control is an illusion. Dreams can turn into nightmares. And now during Mardi Gras, otherworldly powers stand ready to shape their destinies in ways they could never imagine.
Shadow and light. Magic and mystery. Reality and myth. All come together in a place where rules bend and lines blur. Even those between life and death. 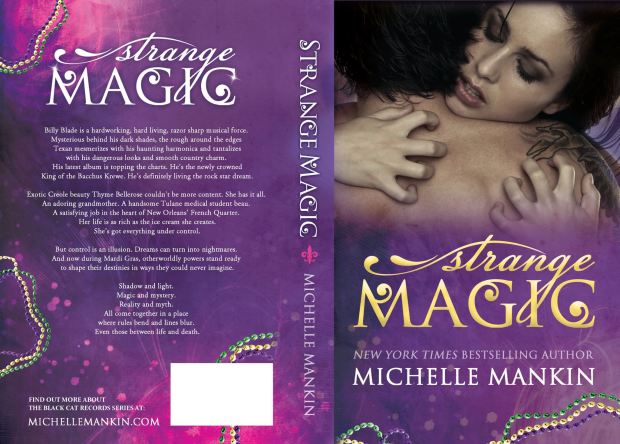