Aimee strikes again with another 5 star read that captures your heart and soul. We’ve met these characters in the Curl Up And Dye series, and, as with all Aimee’s book, you fall in love with the secondary characters and are ecstatic for them to get their own story.

Two broken souls on a winding road on the path to each other. The only problem is they both have to be on board for a relationship to work. We get to go on the rollercoaster of emotions as we watch this romance evolve. It’s worth every single second!

I have both read and listened to the audio book. I have to say, that the book is excellent to read, but the narration really brings the story to life. The he narrator can make or break an audio book, and it’s safe to say Joel Leslie nailed it as always! 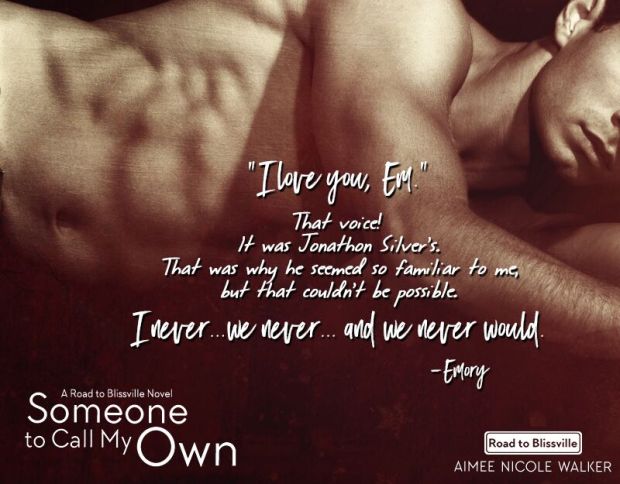 SOMEONE TO CALL MY OWN

Psychic Emory Jackson and former black ops specialist Jonathon Silver are men from two completely different worlds with one thing in common: heartbreak. Emory still mourns the loss of his husband five years prior, and Jon is reeling with grief from the recent death of his twin brother.

Sparks fly when mutual friends introduce them, but it’s so much more than basic attraction. There’s an undeniable awareness and a sense of belonging that neither man can deny. Despite Emory’s premonition of a future with Jon, he has vowed never to love again. Jon is convinced that his tainted soul is the reason he will never have someone to call his own. What if they’re both wrong?

Maybe these broken men with their jagged edges could somehow align perfectly to form something whole and beautiful. But will that realization come too late for them? 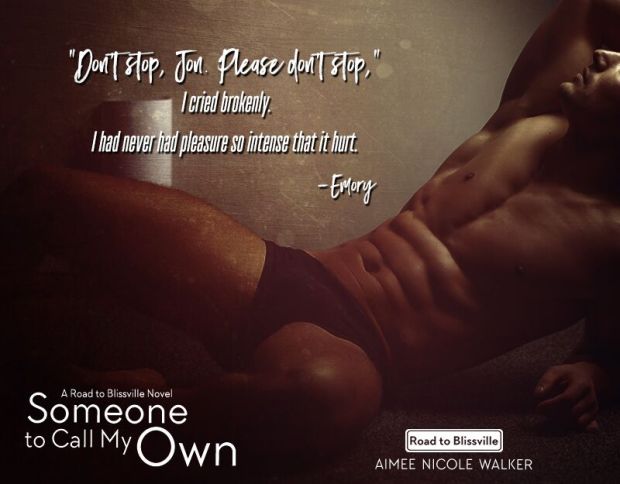 “What are you doing here, Emory?”

“I have a pretty good idea, but what has changed since I left Blissville forty minutes ago?”

“Yet,” he corrected. “You don’t love me yet.” He reached for my hand and slid his fingers in between mine. “If you walk across that threshold with me, I’m going to push you up against the nearest surface and fuck you. Probably more than once. Can you live with that?”

His words sent an electrical current racing through my body. My dick hardened fast and almost painfully beneath my tight briefs. No one had ever talked dirty to me or tried to dominate me, but it ignited something inside me like he was holding a lit match near gasoline fumes. In Jon’s eyes, I saw the raw need that burned through him just as strong as it did me.

Jon didn’t ask me if I was sure; he gripped my hand tightly and pulled me up the broad, stone steps to the front porch. I expected him to drop my hand to unlock the front door, but he hit a few numbers on a keypad with his left hand before twisting the knob to let us inside.

I had caught a brief glimpse of the living room beyond the foyer before Jon turned to me. He didn’t even bother shutting the door before he backed me up against the foyer table. Jon’s hands immediately went to my neck to loosen my tie while he swooped down and captured my lips in a hard, demanding kiss. He released a torrent of emotions he’d repressed since we met, and I tasted each one on his tongue.

I am a wife and mother to three kids, three dogs, and a cat. When I’m not dreaming up stories, I like to lose myself in a good book, cook or bake. I’m a girly tomboy

who paints her fingernails while watching sports and yelling at the referees.

I will always choose the book over the movie. I believe in happily-ever-after. Love inspires everything that I do. Music keeps me sane.

Joel Leslie is a UK transplant, growing up with American parents in a British commonwealth. A classically trained actor with an MFA in theatre from USC, he is often cast for his unique ability to deliver native, authentic combinations of American and British sounds. His great range and ability to bring characters to life with honesty, wit and versatility delights producers and listeners alike.

He is proud to have a strong following with m/m listeners and an ongoing relationship with some of the finest writers in the genre. He loves that every day he gets to share these beautiful, inspirational and empowering GLBT characters with the world.

His authors have praised him as “a narrator among narrators, a man whose ability to create different characters rests on the power of his voice and his impeccable delivery,” and a “true delight…” “his professionalism, good humor, and charm make him a dream to work with,” “Anyone else would only be second best”.

Joel has consistent access to his home studio for all production needs. When not in the booth he spends his time chasing after two loquacious wiener dogs.