As usual, Tessa Bailey delivers a 5 star read. This book was the perfect blend of spicy and sweet. First loves that get a second chance. I absolutely love those stories more than any other.

Bree bolts when it’s time for Skyler to move on to college and she decides to stay home to take care of her family. She’s essentially put her life on hold to do what’s best for her dad and sister. She is the epitome of a true sweetheart. She avoids Kyler at all costs when she knows he’s in town for a visit. That changes quickly when he shows up unannounced and has no intentions of leaving until Bree is his again. 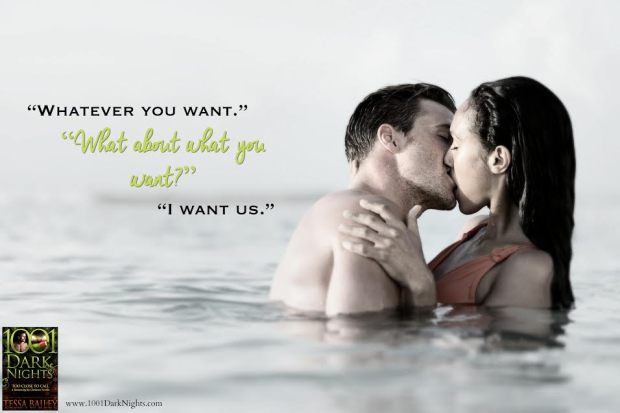 I absolutely love these two. They have good old fashion values but boy does Kyler blow us away when he lets that alpha side out. It was a quick fast paced read that I couldn’t put down.

From New York Times bestselling author Tessa Bailey comes TOO CLOSE TO CALL, a novella in her Romancing the Clarksons Series published by 1001 Dark Nights! Grab your copy today!

About TOO CLOSE TO CALL:

All-American wide receiver Kyler Tate’s life is about to change. A fairytale college career skyrocketed him to the NFL draft. Adoration and opportunity are thrown in his direction wherever he goes, thanks to being chosen in the first round by the Los Angeles Rage.

None of the accolades mean anything, though, without his high school sweetheart, Bree Justice, by his side. Four years ago, she walked away from Kyler, choosing a quiet life over the flash and notoriety his career would someday bring.

Now he’s back in their Indiana hometown, refusing to leave for Los Angeles without her. Demanding she give their life together a shot. Her heart never stopped bleeding for the love of her life, but Bree’s decision was final. Too bad their wild attraction has only been amplified by their separation, and Kyler won’t quit until Bree is wearing his ring.

“Whoa there,” Bree whispered shakily. “This is a church dance.”

Her words seemed to bring him back from whatever land he’d been teleported to. “Right,” he rasped. “We’re supposed to be setting an example.”

“So I should definitely stop thinking about sucking on your lower lip.”

Bree’s thighs pressed together, her gasping inhale shivering all the way down into her tummy. Lower. “Stop that right now.”

His gaze remained zeroed in on her mouth. “Stop thinking about it or saying it out loud?”

“Both.” Trying desperately to remain indignant in the face of that face—and that drawl, those muscles, his familiar scent—Bree warned him with a look. “You said we were going to be friends. There’s nothing the least bit friendly about lip sucking.”

“I don’t know.” He hummed in his throat and tightened his hold around her waist. “Seems like letting me do it would be mighty friendly of you.”

Bree tamped down a laugh. “Friendly or stupid?”

“Because we both know where it leads.” Shit almighty. How had it come to this? She was plastered against her ex-boyfriend—whom she’d yet to shake completely. He looked delicious enough to eat, and now they were having a conversation about sex. And—and—she was wearing her feel- good dress. The one she wore when her hair was down and everything was shaved and waxed. Had she primped because Kyler was back in town? It was too infuriating to speculate on.

“You’re getting pretty worked up down there, supergirl.”

Tessa Bailey is originally from Carlsbad, California. The day after high school graduation, she packed her yearbook, ripped jeans and laptop, driving cross-country to New York City in under four days.

Her most valuable life experiences were learned thereafter while waitressing at K-Dees, a Manhattan pub owned by her uncle. Inside those four walls, she met her husband, best friend and discovered the magic of classic rock, managing to put herself through Kingsborough Community College and the English program at Pace University at the same time. Several stunted attempts to enter the work force as a journalist followed, but romance writing continued to demand her attention.

She now lives in Long Island, New York with her husband of eight years and four-year-old daughter. Although she is severely sleep-deprived, she is incredibly happy to be living her dream of writing about people falling in love.