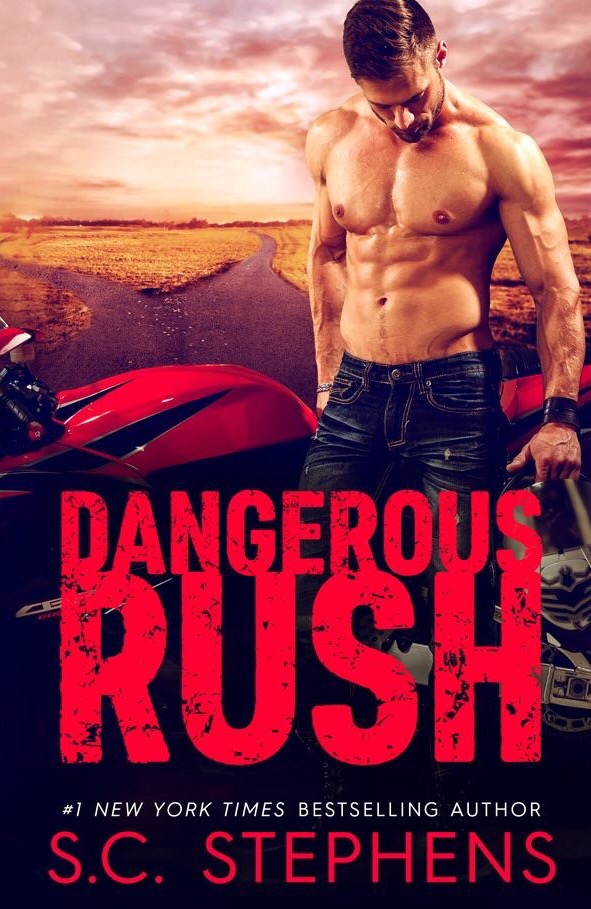 “Riding a race bike is an art—a thing that you do because you feel something inside.”~Valentino Rossi

If you’ve ever been to a NASCAR, Formula One, motocross, or other race, you know that racing is a sensory-driven sport where you feel a buzz in the air. If you race a car or motorcycle on the track or road, you feel that power gush behind the wheel. Like action-packed racing, books can give that rush. Dangerous Rush by SC Stephens sends the senses spinning around the track in a RUSH of a ROMANCE that SPARKS with love and life. 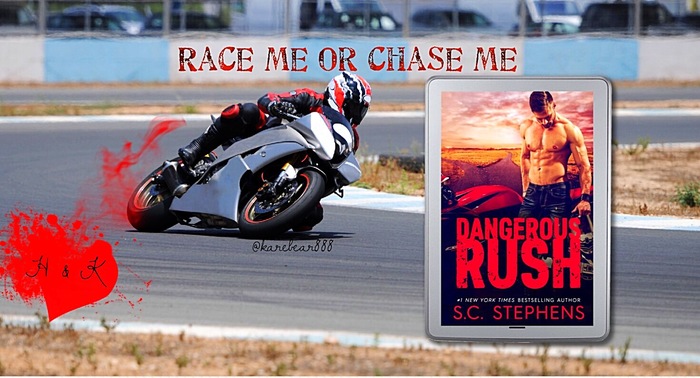 After consuming Furious Rush, I knew I NEEDED MORE. I dove into Dangerous Rush and DEVOURED this story like a hungry lioness, eating every page alive. Every page of Dangerous Rush made me FEEL ALIVE.

My eyes were etched with tears. My breaths were bated. My pulse pounded. My heart beat out of my chest. I smiled. I laughed. I LOVED SO MUCH. A roller coaster of a romance that hits the heart hard, surging straight to the soul, Dangerous Rush is a RUSH FELT EVERYWHERE.

I lived and breathed these characters that came to life before my eyes.


Seeing her was like walking outside into the fresh air after being cooped up in a stagnant room all day long—I could finally breathe again.

I MELTED into a puddle of goo. Hayden’s words made me SWOON so hard! Sweet sigh.

Hayden, the green-eyed and gorgeous blond racing god, so broken and beautiful, OWNED ME since Furious Rush. I FELL IN MADLY IN LOVE WITH HAYDEN HAYES AGAIN!!! There was a time or two I wanted to junk-punch this sometimes mixed-up man in this story though. I could not hate Hayden, as I was helpless to his spell. Hayden had my heart.

Kenzie, the brunette beauty, oh how I loved her as much as Hayden and even more in Dangerous Rush. She grew up so much in this story, shining solo with determination and dominance that I greatly admired. Kenzie has strength in spades and is one of the strongest heroines ever.

Kenzie and Hayden are MAGIC together, and I was mesmerized by this magnetic couple. Their relationship is full of fire fueled by love. I LOVE them both so much!


Giving me a devilish grin, she murmured,

“Race me or chase me, Hayes,” then she took off like a bolt of lightning.

God, I loved racing this woman.

Hot, heart-pounding, and utterly hypnotizing, Dangerous Rush is the highest of highs meets the lowest of lows. This book BREATHED LIFE into me while it BLED ANGST through me. I felt this story course through me. I felt the angst tug at my heart, pulling me under. I felt the bitter sting of rejection. I felt heartbreak. I felt hope. I felt happiness. I FELT EVERYTHING. I WAS FLOATING IN FEELS THE WHOLE STORY.

Dangerous Rush is a tale of guts and glory that bleeds angst, a romance that EXPLODES with EMOTION. This touching and turbulent tale tugged my heart every step of the way, stomping on it and then stitching it back together several times. Dangerous Rush pulled me under with its poignant mix of sweetness and sorrow. I was a GONER!!!

What did you do to me, SC Stephens?!? I’m still trying to come off the HIGH I chased called Dangerous Rush! This story SLAYED me!!! I still FEEL this thrilling and tender tale coursing through me. Dangerous Rush is a rush I want to stay and feel forever.

Feeling the rush comes with a price…
Mackenzie Cox has lost everything—except Hayden Hayes. With Kenzie’s racing career over, and her family no longer speaking to her, Hayden has been her rock, as she tries to pick up the pieces of what was once her life.

But when Hayden’s racing team hires his beautiful ex-girlfriend, Felicia, to be their new hotshot rider, Kenzie and Hayden’s seemingly solid relationship begins to crack. Kenzie can only watch from the sidelines, as Felicia lives the life she was forced to leave behind, and as tension begins to build between Hayden and Kenzie, she wonders if Hayden isn’t the man she once knew.

Mackenzie Cox has a lot to prove. Daughter of a racing legend, she is eager to show the world that she has inherited her father’s talent in the male-dominated sport of professional motorcycle racing. The last thing Kenzie needs is to be antagonized by her rival team’s newest rider, Hayden Hayes. Plucked from the world of illegal street racing, Hayden immediately gets under Kenzie’s skin. His insinuations that Kenzie is a spoiled princess who was handed her career fuels her desire to win, and much to her surprise, Kenzie soon learns she performs better when she’s racing against Hayden.

As Kenzie and Hayden push each other on the track, the electric energy between them off the track shifts into and intense—and strictly forbidden—attraction. The only rule between their two ultra-competitive teams is zero contact. Kenzie always does her best to play by the rules, but when her team slips into a financial crisis, she has no choice but to turn to Hayden for help. The tension simmers during their secret, late-night rendezvous, but Kenzie has too much to lose to give in to her desires. Especially when she begins to doubt that Hayden has completely left his street life behind…

S.C. Stephens is a bestselling author who enjoys spending every free moment she has creating stories that are packed with emotion and heavy on romance.

Her debut novel, Thoughtless, an angst-filled loved triangle charged with insurmountable passion and the unforgettable Kellan Kyle, took the literary world by storm. Amazed and surprised by the response to the release of Thoughtless in 2009, more stories were quick to follow. Stephens has been writing nonstop ever since.

In addition to writing, Stephens enjoys spending lazy afternoons in the sun reading fabulous novels, loading up her iPod with writer’s block reducing music, heading out to the movies and spending quality time with her friends and family. She currently resides in the beautiful Pacific Northwest with her two equally beautiful children.