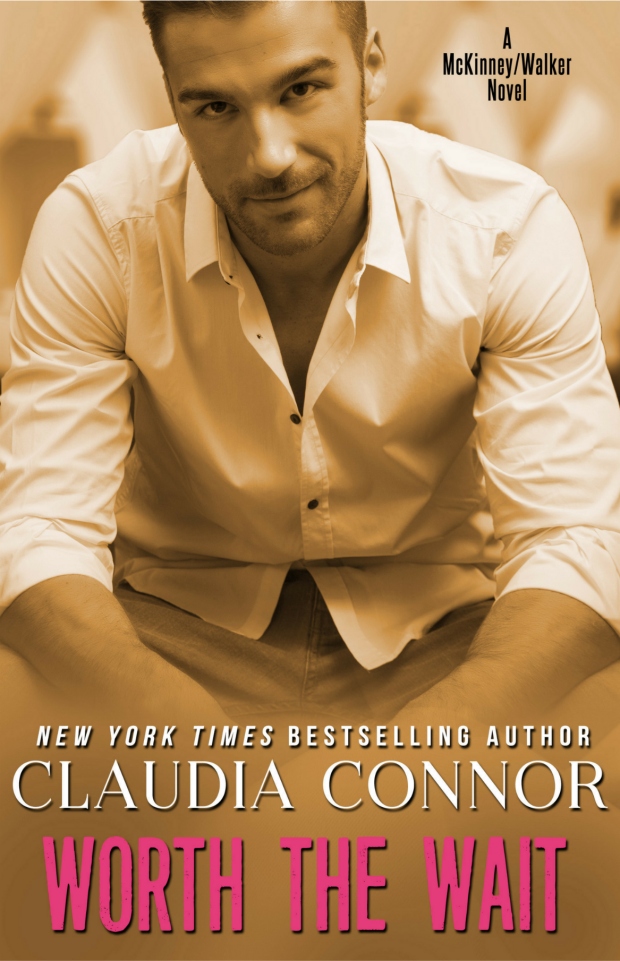 I have told Claudia many, many times that finding her TOTALLY by accident and buying Worth The Fall on a whim was the one of the best impulse buys I have ever done. I have been blown away by her talent and by far, she is one of the classiest authors I have had the honor to know and support. The McKinney Brothers are so incredibly swoonworthy. Honorable, hard working guys… the series without fail is one of my all time favorites. Now, she’s given us Nick Walker and wow. Just plain wow!

We met Nick Walker in Stephen’s book, Worth The Risk. The tough as nails older brother of Hannah Walker. He was fiercely protective of his baby sister having given up much of his life to raise her after the tragic death of their parents. But Nick was more than brother – he was father, provider and best friend. He wasn’t always hard hearted. An even more horrible event happens under his watch to his beloved sister. It changes the course of his life in so many ways, the biggest being the loss of his true love… the girl he simply couldn’t let go. His Mia.

This story was told in the most amazing flashbooks. We see the beginning of their relationship – the young hot love between the 19 year old Nick and the 17 year old Mia. We see their love blossom, grow and expand over 24 years. The good times, the great times… the tragic events and the heartbreaking loss of a special bond between two incredible people… a bond that survived college, medical school, the FBI academy – even time and distance – severed by guilt, pain and fear.

The emotions in this amazing story! I laughed, cried… absolutely SOBBED. The revelations of 24 years. The heartbreak that took on a life of its own when Nick couldn’t seem to reach Mia through his own pain. The losses and unbelievable hurts that Mia had to face alone. The crazy family dynamics. This was one twisty, topsy turvy absolutely wonderful roller coaster ride from the first page to the very last word. Nick made me swoon and clutch at my heart with his beautiful words, his protective nature, and his undeniable sexy ways. Mia is so strong, so beautiful… the perfect compliment to this man. Determined and independent but a nuturing soul who gave the Walkers peace in the storm of grief. She is by far one of my favorite heroines of all time.

This was just the most moving second chance romance I have read in quite some time. It was stunning and so satisfying. I closed my kindle cheering for Nick and Mia! Cheering and wiping my face! Watching them find not only their love again but coming to terms with all the pains of the past and time lost was soul warming. Claudia gave us a story that is engaging, delightful and thought provoking. So well worth the sleepy eyes and several cups of coffee that I had the morning after I finished. An absolute MUST READ for any McKinney Brothers fan!

Five Worth The Wait Stars!

He broke her heart. When he finds out just how badly, it will break his too.

Nick Walker found the love of his life when he was just nineteen.

Found her.
Loved her.
Lost her.

It’s been ten years since Nick watched the only woman he ever loved walk out of his life. Now this FBI Special Agent will do anything to win her back.

But it won’t be easy…

Mia’s heart was shattered by Nick. They’ll have to face their painful past if they want a future, including Mia’s own secret about that day it all fell apart.

Do you believe in second chances?

***Every title by Claudia Connor is a Contemporary Romance and a full stand alone novel. No cheating, no love triangle, no cliff hanger.

Nick pressed two fingers into the sleep deprived headache pounding in his temple and tried to concentrate on professor Jenkins’s explanation of ideal gas law. He circled a line of notes, ignored the knock on the auditorium door until he heard the familiar cry. Hannah, who he’d left in the university daycare two hours ago.

The high pitched wail wasn’t his two year old sister’s hurt cry. It was her scared cry with a touch of pissed off. In the six months since their parents’ death, he’d learned to tell the difference. He’d learned a lot of things. Like if he didn’t take her to the bathroom, she’d likely wait too long and have an accident. Like green beans made her throw up, but she’d eat them if he told her to. And she would never, ever go to sleep without Mr. Bunny.

He was up, out of his seat, and halfway down the auditorium stairs before his professor laid his pen down.

Nick’s eyes narrowed on the young blonde in an oversized sweatshirt with silk greek letters sewn on the front. She held a sobbing Hannah dressed in the sunny yellow sundress he’d picked out that morning. She hadn’t been crying when he left her. Now her eyes were red and snot mixed with tears dripped into her mouth. Hannah lunged for him. His arms engulfed her small body and his heart squeezed like it always did when she held onto him.

“I stay you,” Hannah said. Each word tumbled out of her with a jerk of her tiny shoulders.

“What happened to her?”

“Nothing happened to her. She hasn’t stopped screaming for the past hour and she bit three people. We can’t keep her like that.”

She missed her nap.

And the loudest of all, it was my fault for leaving her.

Hannah raised her head to look at him, giant tears hanging from golden lashes. “I bite.”

“Well. At least she’s honest.” Professor Jenkins turned his questioning eyes to Nick. “She yours?”

He hesitated, but only a second. “My sister. But yes, she’s mine.” And at that moment she became even more his, which seemed to be the case every day. Every day, a little more his.

Claudia Connor is the author of the New York Times and USA Today Bestselling series, The McKinney Brothers. Her debut novel, WORTH THE FALL, hit the New York Times Bestsellers list in 2014 and received numerous Best Contemporary Romance of 2014 accolades.

Claudia attended Auburn University, where she received her undergraduate and master’s degrees in early childhood education. After teaching kindergarten and first grade for ten years, she retired to be a full-time mom to her three daughters. Always a lover of books, and always one to have stories playing in her mind, she decided to try her hand at writing. It took seven years to finish her first novel and a new love was born.

Claudia lives near Memphis, Tennessee with her husband, three daughters, two cats, and a singer-songwriter Siberian Husky. She continues to write warm, heartfelt, and emotional romances with a bit of steam, a lot of family and always a happily ever after.