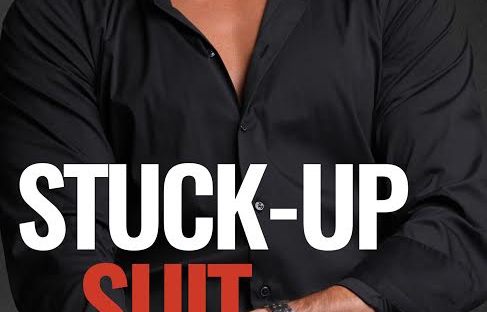 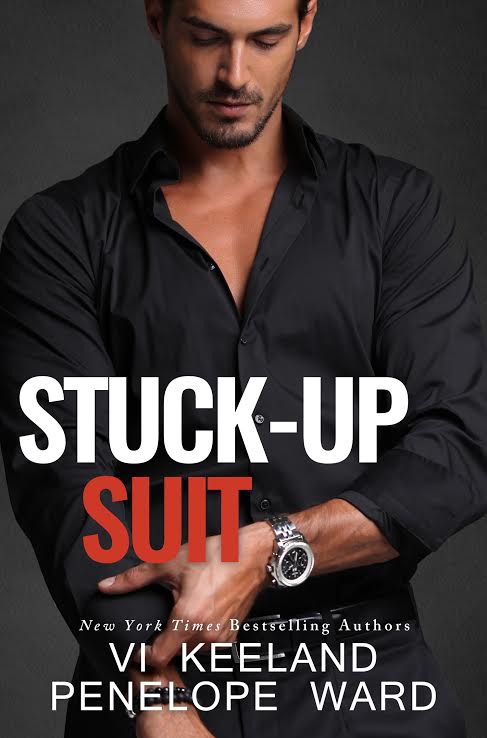 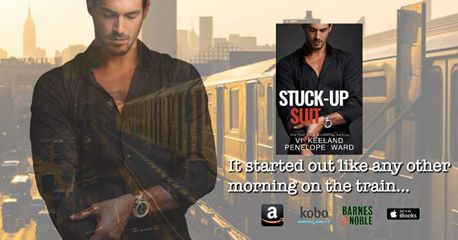 Add Stuck-Up Suit to your TBR list on Goodreads!
https://www.goodreads.com/book/show/28477789-untitled

Blurb
It started out like any other morning on the train.

Until I became mesmerized by the guy sitting across the aisle.

He was barking at someone on his phone like he ruled the world.

Who did the stuck-up suit think he was…God?

Actually, he looked like a God. That was about it.

When his stop came, he got up suddenly and left.  So suddenly, he dropped his phone on the way out.

I might have gone through all of his photos and called some of the numbers.

I might have held onto the mystery man’s phone for days—until I finally conjured up the courage to return it.

When I traipsed my ass across town to his fancy company, he refused to see me.

So, I left the phone on the empty desk outside the arrogant jerk’s office.

I might have also left behind a dirty picture on it first though.

I didn’t expect him to text back.

I didn’t expect our exchanges to be hot as hell.

I didn’t expect to fall for him—all before we even met.

The two of us couldn’t have been any more different.

Yet, you know what they say about opposites.

When we finally came face to face, we found out opposites sometimes do more than attract—we consumed each other.

Nothing could have prepared me for the ride he took me on. And I certainly wasn’t prepared for where I’d wind up when the ride was over.

All good things must come to an end, right?

Except our ending was one I didn’t see coming. 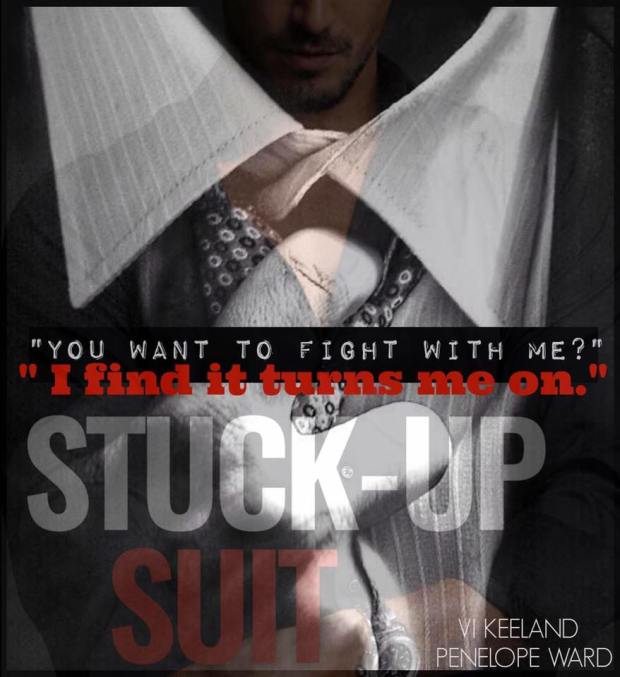 REVIEWED by Sophie
Six Deliriously Happy stars….
“Stuck Up Suit is an out of this world, phenomenal read that has had me addicted to my Kindle for the past 24 hours. This book was pure perfection, highly addicting and super sexy.
Penelope and Vi are two of my favourite authors. On their own, their words are divine. But together they create something else entirely, something so freaking amazing that no descriptive word will ever do it justice.”
Read my full review here – https://bookaliciousbabes.com/2016/04/14/review-stuck-up-suit-by-vi-keeland-penelope-ward/ 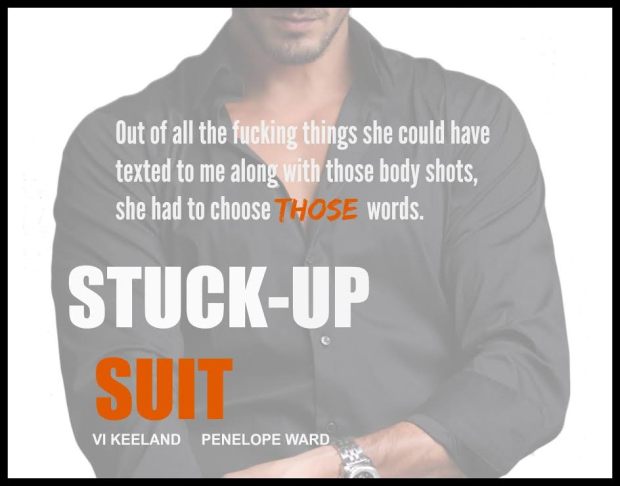 Outside of the restaurant, Graham’s black car was already curbside.  He must have had it waiting and called the driver when I went to the restroom.
“If you’re not going to come home with me, I insist on at least giving you a ride home to your place.”
“The subway is right around the corner.  I’m good.”
He shot me an annoyed glance.  “Give a little, Soraya.  It’s a ride home, not a ride on my cock.  And I think you know by now that I’m not a serial killer.”
“You’re so crass.”
He put his hand on the small of my back and steered me to the waiting open car door.  I didn’t put up a fight.  Graham was right, I was being stubborn while he had pretty much agreed to anything I demanded.  Something told me it was a rare occasion when the man was this flexible.
When we arrived at my apartment, Graham walked me to the door.
“When will I see you again?”
“Well, tomorrow is Saturday, so I suppose maybe Monday on the train.”
“Have dinner with me again tomorrow?”
“I have plans.”
His jaw flexed.  “With whom?”
We embarked into a lengthy stare off.  His gaze was hard.  When neither of us gave for a few minutes, he grumbled Christ under his breath, and before I realized what was happening, my back was against the door, and his mouth was on mine.
He kissed me as if he wanted to eat me alive.  Before releasing my mouth, he took my lower lip between his teeth and tugged.  Hard.  With his lips vibrating up against mine, he spoke.  “Don’t push me to my limit, Soraya.”
“Why?  What will happen?”
“I’ll push back.  And I’m trying not to do that with you.”
He was being honest, and I realized I should appreciate that.  “To my sister’s house.  It’s my niece’s birthday party.  That’s where I’m going tomorrow night.
He nodded.  “Thank you.”
It took every bit of my willpower to go inside and shut the door behind me.  I leaned my back against the door, unable to remember the last time I was so hot and bothered.  Maybe not ever.  His mouth was sinful; the thought of what he could do with that wicked tongue other places on my body kept me in a state of arousal that bordered on frenzied.  But it was more than that.  The way he was so dominating and controlling, yet exercised restraint to respect my wishes, was the sexiest thing I’d ever seen.  The man stimulated something that had been sleeping inside of me.  I needed a glass of wine and an orgasm.  Not necessarily in that order.  If I was going be firm on my stance that we get to know each other and not have sex, then taking things into my own hands was absolutely essential.
In my bedroom, I stripped out of my clothes.  I didn’t sleep naked every night, but tonight was definitely a bare evening.  As I slipped into bed, my cell rang.
“Is phone sex on the table?”  Graham’s voice was a needy rasp.  Whatever cooling off my body had done since I left him on the other side of the door was instantly reheated.  His voice could definitely speed things up for me.  But…
“Sex is off the table.  That should probably include all types of sex.  Intercourse, oral, phone.”
He groaned.  “Oral.  God, I want to taste you.  And feel that metal tongue ring on my cock.  You have no idea how difficult it was to control myself tonight every time I caught a glimpse of that metal when you spoke.  It’s like you’re taunting me with every word.  What are you wearing, Soraya?”
That voice.  I needed to record him saying What are you wearing, Soraya?  So I could play it over and over again in a loop when I needed to satisfy my own needs.  “I’m actually not wearing anything.  I just got undressed and slipped into bed.”
“You sleep naked?”
“Sometimes.”
He actually growled.  “Touch yourself.”
“I plan to.  But I think I’m going to need both hands tonight.  So I’m going to hang up first.”
“How long do you plan on driving me crazy, Soraya?”
“Good night, Graham.”  I hung up without waiting for him to respond.  Even though my body physically ached for the man, I wasn’t ready to open that door with him just yet.  Although as I glided my hand down my body alone in my bed, the only thing I could think of was God, I wish it was his hand. 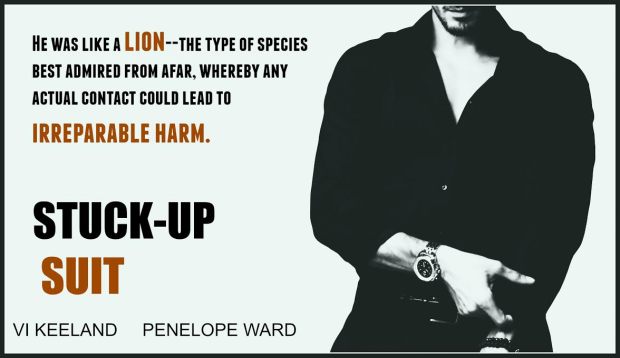 Enter to win a $50 Amazon gift card!  To enter, sign up for Penelope & Vi’s mailing list.  It’s one-click easy and you will automatically be entered!  http://eepurl.com/brAPo9

Penelope Ward is a New York Times, USA Today and #1 Wall Street Journal bestselling author. Penelope lives for reading books in the new adult/contemporary romance genre, coffee and hanging out with her friends and family on weekends. She is the proud mother of a beautiful 11-year-old girl with autism (the inspiration for the character Callie in Gemini) and a 9-year-old boy, both of whom are the lights of her life. Penelope, her husband and kids reside in Rhode Island. She is the author of RoomHate, which hit #2 on the New York Times Bestseller list and #1 on the Wall Street Journal Bestseller list. Her novel, Stepbrother Dearest, also spent four consecutive weeks on the New York Times Bestseller list. Other works include the New York Times bestseller Cocky Bastard (co-written with Vi Keeland), Sins of Sevin, My Skylar, Jake Undone, Jake Understood and Gemini.

Vi Keeland is a native New Yorker with three children that occupy most of her free time, which she complains about often, but wouldn’t change for the world. She is an attorney and a New York Times, Wall Street Journal, & USA Today Bestselling author. Over the last three years, ten of her titles have appeared on the USA Today Bestseller lists and three on the New York Times Bestseller lists.